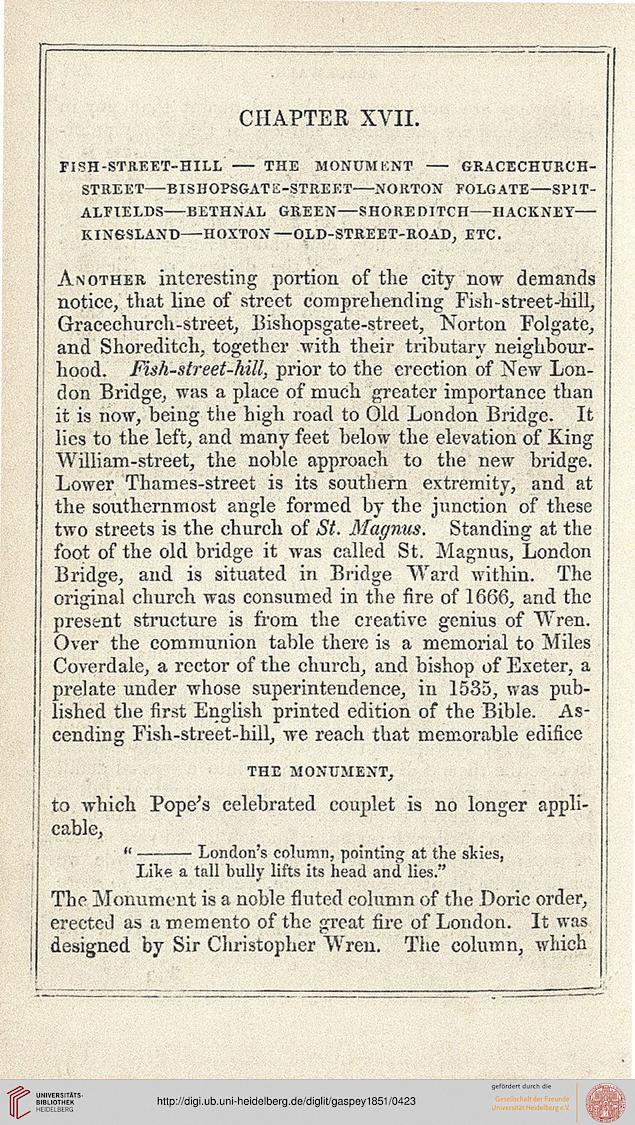 Another interesting portion of the city now demands
notice, that line of street comprehending Fish-street-hill,
Graeechurch-street, Bishopsgate-street, Norton Folgate,
and Shorediteh, together with their trihutary neighbour-
hood. Fish-street-MU, prior to the erection, of New Lon-
don Bridge, was a place of much greater importance than
it is now, being the high road to Old London Bridge. It
lies to the left, and many feet below the elevation of King
William-street, the noble approach to the new bridge.
Lower Thames-street is its southern extremity, and at
the southernmost angle formed by the junction of these
two streets is the church of St. Magnus. Standing at the
foot of the old bridge it was called St. Magnus, London
Bridge, and is situated in Bridge Ward within. The
original church was consumed in the fire of 1666, and the
present structure is from the creative genius of Wren.
Over the communion table there is a memorial to Miles
Coverdale, a rector of the church, and bishop of Exeter, a
prelate under whose superintendence, in 1535, was pub-
lished the first English printed edition of the Bible. As-
cending Fish-street-hill, we reach that memorable edifice

to which Pope's celebrated couplet is no longer appli-
cable,

Xilte a tall bully lifts its head and lies."

The Monument is a noble fluted column of the Doric order,
erected as a memento of the great fire of London. It was
designed by Sir Christopher Wren. The column, which