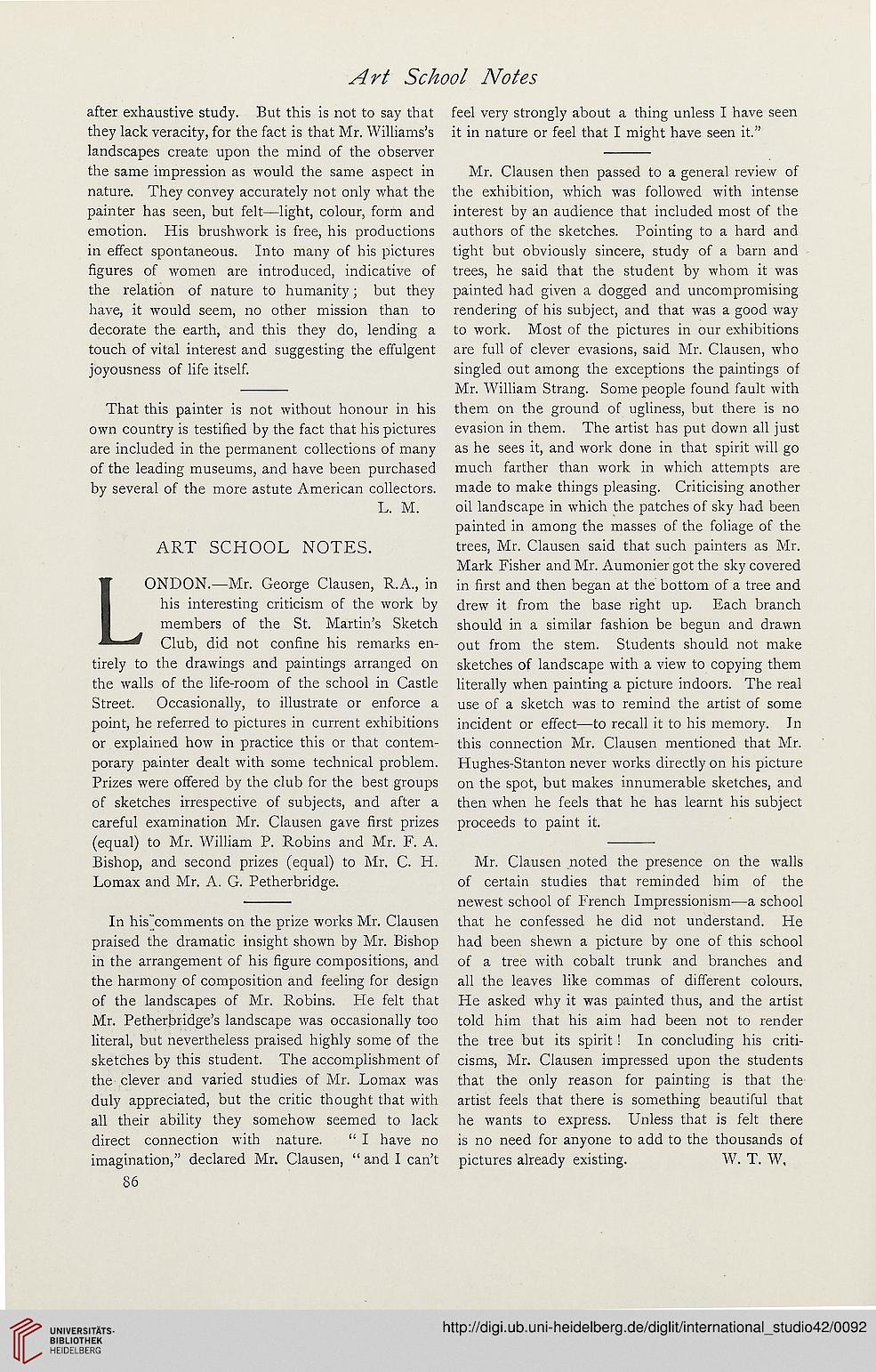 after exhaustive study. But this is not to say that
they lack veracity, for the fact is that Mr. Williams's
landscapes create upon the mind of the observer
the same impression as would the same aspect in
nature. They convey accurately not only what the
painter has seen, but felt—light, colour, form and
emotion. His brushwork is free, his productions
in effect spontaneous. Into many of his pictures
figures of women are introduced, indicative of
the relation of nature to humanity; but they
have, it would seem, no other mission than to
decorate the earth, and this they do, lending a
touch of vital interest and suggesting the effulgent
joyousness of life itself.

That this painter is not without honour in his
own country is testified by the fact that his pictures
are included in the permanent collections of many
of the leading museums, and have been purchased
by several of the more astute American collectors.

LONDON.—Mr. George Clausen, R.A., in
his interesting criticism of the work by
members of the St. Martin's Sketch
Club, did not confine his remarks en-
tirely to the drawings and paintings arranged on
the walls of the life-room of the school in Castle
Street. Occasionally, to illustrate or enforce a
point, he referred to pictures in current exhibitions
or explained how in practice this or that contem-
porary painter dealt with some technical problem.
Prizes were offered by the club for the best groups
of sketches irrespective of subjects, and after a
careful examination Mr. Clausen gave first prizes
(equal) to Mr. William P. Robins and Mr. F. A.
Bishop, and second prizes (equal) to Mr. C. H.
Lomax and Mr. A. G. Petherbridge.

In his"comments on the prize works Mr. Clausen
praised the dramatic insight shown by Mr. Bishop
in the arrangement of his figure compositions, and
the harmony of composition and feeling for design
of the landscapes of Mr. Robins. He felt that
Mr. Petherbridge's landscape was occasionally too
literal, but nevertheless praised highly some of the
sketches by this student. The accomplishment of
the clever and varied studies of Mr. Lomax was
duly appreciated, but the critic thought that with
all their ability they somehow seemed to lack
direct connection with nature. " I have no
imagination," declared Mr. Clausen, " and I can't
86

feel very strongly about a thing unless I have seen
it in nature or feel that I might have seen it."

Mr. Clausen then passed to a general review of
the exhibition, which was followed with intense
interest by an audience that included most of the
authors of the sketches. Pointing to a hard and
tight but obviously sincere, study of a barn and
trees, he said that the student by whom it was
painted had given a dogged and uncompromising
rendering of his subject, and that was a good way
to work. Most of the pictures in our exhibitions
are full of clever evasions, said Mr. Clausen, who
singled out among the exceptions the paintings of
Mr. William Strang. Some people found fault with
them on the ground of ugliness, but there is no
evasion in them. The artist has put down all just
as he sees it, and work done in that spirit will go
much farther than work in which attempts are
made to make things pleasing. Criticising another
oil landscape in which the patches of sky had been
painted in among the masses of the foliage of the
trees, Mr. Clausen said that such painters as Mr.
Mark Fisher and Mr. Aumonier got the sky covered
in first and then began at the bottom of a tree and
drew it from the base right up. Each branch
should in a similar fashion be begun and drawn
out from the stem. Students should not make
sketches of landscape with a view to copying them
literally when painting a picture indoors. The real
use of a sketch was to remind the artist of some
incident or effect—to recall it to his memory. In
this connection Mr. Clausen mentioned that Mr.
Hughes-Stanton never works directly on his picture
on the spot, but makes innumerable sketches, and
then when he feels that he has learnt his subject
proceeds to paint it.

Mr. Clausen noted the presence on the walls
of certain studies that reminded him of the
newest school of French Impressionism—a school
that he confessed he did not understand. He
had been shewn a picture by one of this school
of a tree with cobalt trunk and branches and
all the leaves like commas of different colours.
He asked why it was painted thus, and the artist
told him that his aim had been not to render
the tree but its spirit! In concluding his criti-
cisms, Mr. Clausen impressed upon the students
that the only reason for painting is that the
artist feels that there is something beautiful that
he wants to express. Unless that is felt there
is no need for anyone to add to the thousands of
pictures already existing. W. T. W,