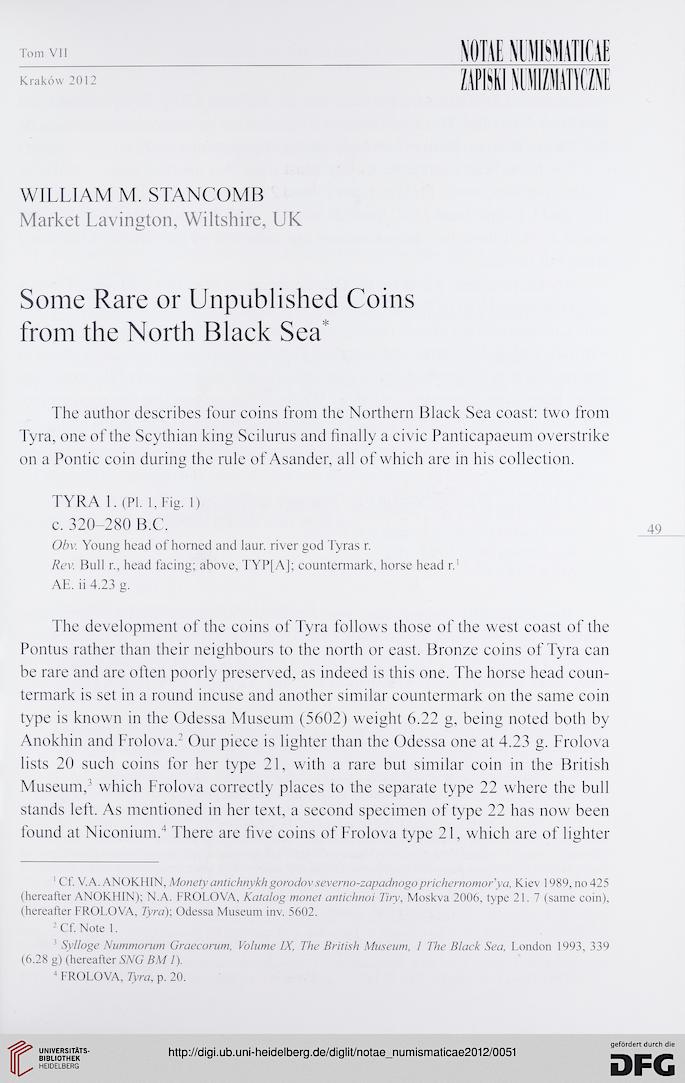 Some Rare or Unpublished Coins
from the North Black Sea*

The author describes four coins from the Northern Black Sea coast: two from
Tyra, one of the Scythian king Scilurus and finally a civic Panticapaeum overstrike
on a Pontic coin during the rule of Asander, all of which are in his collection.
TYRA 1. (PI. 1, Fig. 1)
c. 320-280 B.C.
Obv. Young head of homed and laur. river god Tyras r.
Rev. Buli r., head facing; above, TYP[A]; countermark, horse head r.1
AE. ii 4.23 g.
The development of the coins of Tyra follows those of the west coast of the
Pontus rather than their neighbours to the north or east. Bronze coins of Tyra can
be rare and are often poorly preserved, as indeed is this one. The horse head coun-
termark is set in a round incuse and another similar countermark on the same coin
type is known in the Odessa Museum (5602) weight 6.22 g, being noted both by
Anokhin and Frolova.2 Our piece is lighter than the Odessa one at 4.23 g. Frolova
lists 20 such coins for her type 21, with a rare but similar coin in the British
Museum,3 which Frolova correctly places to the separate type 22 where the buli
stands left. As mentioned in her text, a second specimen of type 22 has now been
found at Niconium.4 There are five coins of Frolova type 21, which are of lighter