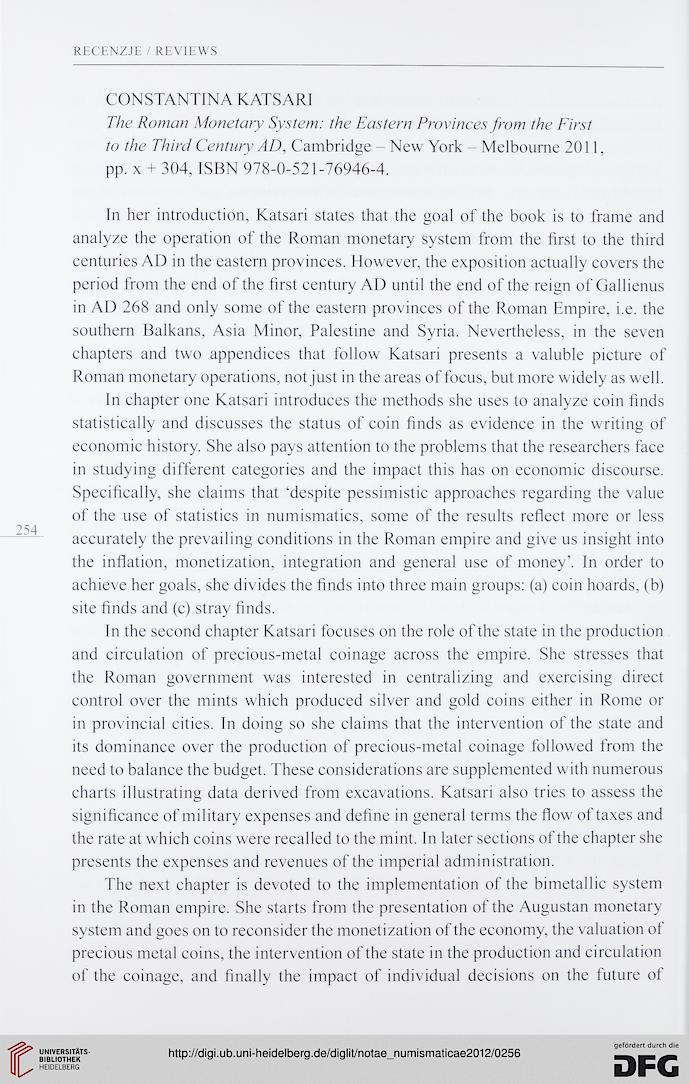 CONSTANTINA KATSARI
The Roman Monetary System: the Eastern Provinces from the First
to the Third Century AD, Cambridge - New York - Melbourne 2011,
pp. x + 304, ISBN 978-0-521-76946-4.
In her introduction, Katsari States that the goal of the book is to frame and
analyze the operation of the Roman monetary system from the first to the third
centuries AD in the eastern provinces. However, the exposition actually covers the
period from the end of the first century AD until the end of the reign of Gallienus
in AD 268 and only some of the eastern provinces of the Roman Empire, i.e. the
Southern Balkans, Asia Minor, Palestine and Syria. Nevertheless, in the seven
chapters and two appendices that follow Katsari presents a valuble picture of
Roman monetary operations, not just in the areas of focus, but morę widely as well.
In chapter one Katsari introduces the methods she uses to analyze coin finds
statisticalły and discusses the status of coin finds as evidence in the writing of
economic history. She also pays attention to the problems that the researchers face
in studying different categories and the impact this has on economic discourse.
Specifically, she claims that ‘despite pessimistic approaches regarding the value
of the use of statistics in numismatics, some of the results reflect morę or less
accurately the prevailing conditions in the Roman empire and give us insight into
the inflation, monetization, integration and generał use of money’. In order to
achieve her goals, she divides the finds into three main groups: (a) coin hoards, (b)
site finds and (c) stray finds.
In the second chapter Katsari focuses on the role of the State in the production
and circulation of precious-metal coinage across the empire. She stresses that
the Roman government was interested in centralizing and exercising direct
control over the mints which produced silver and gold coins either in Romę or
in provincial cities. In doing so she claims that the intervention of the State and
its dominance over the production of precious-metal coinage fołlowed from the
need to balance the budget. These considerations are supplemented with numerous
charts illustrating data derived from excavations. Katsari also tries to assess the
significance of military expenses and define in generał terms the flow of taxes and
the ratę at which coins were recalled to the mint. In later sections of the chapter she
presents the expenses and revenues of the imperial administration.
The next chapter is devoted to the implementation of the bimetallic system
in the Roman empire. She starts from the presentation of the Augustan monetary
system and goes on to reconsider the monetization of the economy, the valuation of
precious metal coins, the intervention of the State in the production and circulation
of the coinage, and finally the impact of indiyidual decisions on the futurę of