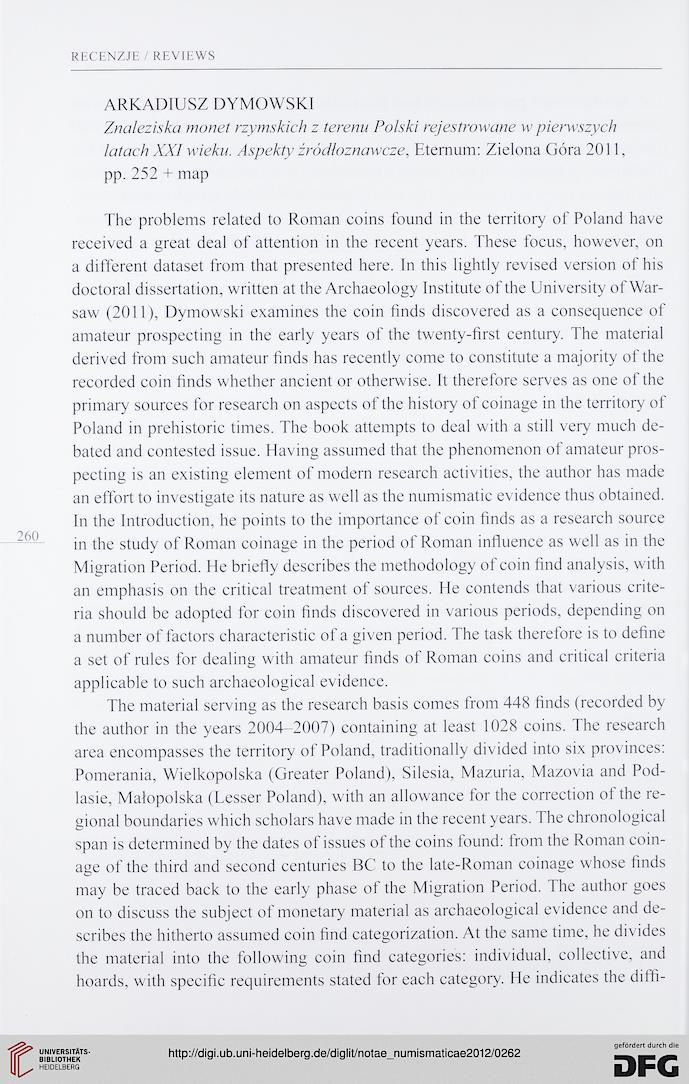 ARKADIUSZ DYMOWSKI
Znaleziska monet rzymskich z terenu Polski rejestrowane w pierwszych
latach XXI wieku. Aspekty źródłoznawcze, Etemum: Zielona Góra 2011,
pp. 252 + map
The problems related to Roman coins found in the territory of Poland have
received a great deal of attention in the recent years. These focus, however, on
a different dataset from that presented here. In this lightly revised version of his
doctoral dissertation, written at the Archaeology Institute of the University of War-
saw (2011), Dymowski examines the coin finds discovered as a conseąuence of
amateur prospecting in the early years of the twenty-first century. The materiał
derived from such amateur finds has recently come to constitute a majority of the
recorded coin finds whether ancient or otherwise. It therefore serves as one of the
primary sources for research on aspects of the history of coinage in the territory of
Poland in prehistorie times. The book attempts to deal with a still very much de-
bated and contested issue. Having assumed that the phenomenon of amateur pros-
pecting is an existing element of modem research activities, the author has madę
an effort to investigate its naturę as well as the numismatic evidence thus obtained.
In the Introduction, he points to the importance of coin finds as a research source
in the study of Roman coinage in the period of Roman influence as well as in the
Migration Period. He briefly describes the methodology of coin find analysis, with
an emphasis on the critical treatment of sources. He contends that various crite-
ria should be adopted for coin finds discovered in various periods, depending on
a number of factors characteristic of a given period. The task therefore is to define
a set of rules for dealing with amateur finds of Roman coins and critical criteria
applicable to such archaeological evidence.
The materiał serving as the research basis comes from 448 finds (recorded by
the author in the years 2004-2007) containing at least 1028 coins. The research
area encompasses the territory of Poland, traditionally divided into six provinces:
Pomerania, Wielkopolska (Greater Poland), Silesia, Mazuria, Mazovia and Pod-
lasie, Małopolska (Lesser Poland), with an ałlowance for the correction of the re-
gional boundaries which scholars have madę in the recent years. The chronological
span is determined by the dates of issues of the coins found: from the Roman coin-
age of the third and second centuries BC to the late-Roman coinage whose finds
may be traced back to the early phase of the Migration Period. The author goes
on to discuss the subject of monetary materiał as archaeological evidence and de-
scribes the hitherto assumed coin find categorization. At the same time, he divides
the materiał into the following coin find categories: individual, collective, and
hoards, with specific reąuirements stated for each category. He indicates the diffi-