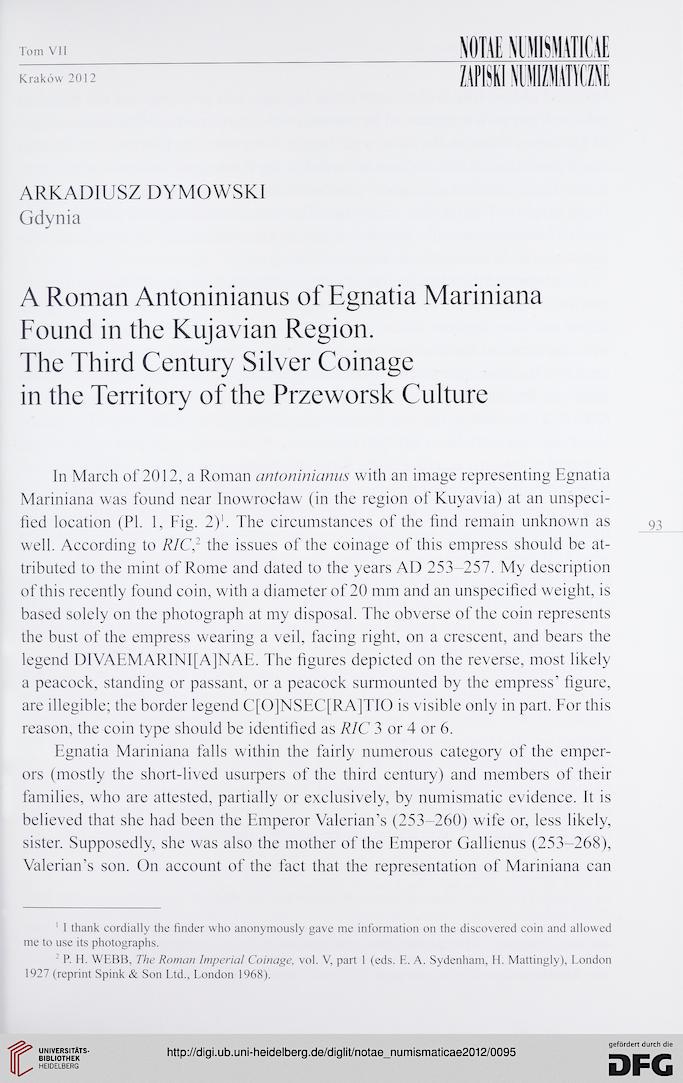 A Roman Antoninianus of Egnatia Mariniana
Found in the Kujavian Region.
The Third Century Silver Coinage
in the Territory of the Przeworsk Culture

In March of 2012, a Roman antoninianus with an image representing Egnatia
Mariniana was found near Inowrocław (in the region of Kuyavia) at an unspeci-
fied location (PI. 1, Fig. 2)1. The circumstances of the find remain unknown as
well. According to R1C,2 the issues of the coinage of this empress should be at-
tributed to the mint of Romę and dated to the years AD 253-257. My description
of this recently found coin, with a diameter of 20 mm and an unspecified weight, is
based solely on the photograph at my disposal. The obverse of the coin represents
the bust of the empress wearing a veil, facing right, on a crescent, and bears the
legend DIVAEMARINI[A]NAE. The figures depicted on the reverse, most likely
a peacock, standing or passant, or a peacock surmounted by the empress’ figurę,
are illegible; the border legend C[0]NSEC[RA]TIO is visible only in part. For this
reason, the coin type should be identified as RIC 3 or 4 or 6.
Egnatia Mariniana falls within the fairly numerous category of the emper-
ors (mostly the short-lived usurpers of the third century) and members of their
families, who are attested, partially or exclusively, by numismatic evidence. It is
believed that she had been the Emperor Valerian’s (253-260) wife or, less likely,
sister. Supposedly, she was also the mother of the Emperor Gallienus (253-268),
Valerian’s son. On account of the fact that the representation of Mariniana can

1 I thank cordially the finder who anonymously gave me information on the discovered coin and allowed
me to use its photographs.
2 P. H. WEBB, The Roman Imperial Coinage, vol. V, part 1 (eds. E. A. Sydenham, H. Mattingly), London
1927 (reprint Spink & Son Ltd., London 1968).