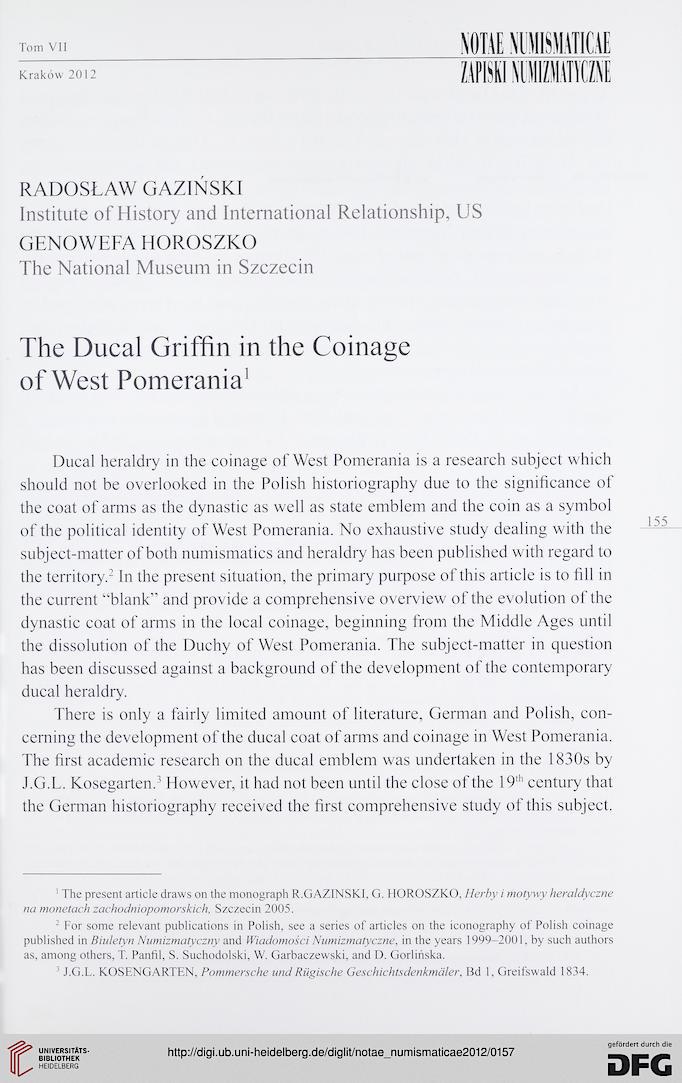 
RADOSŁAW GAZIŃSKI
Institute of History and International Relationship, US
GENOWEFA HOROSZKO
The National Museum in Szczecin

The Ducal Griffin in the Coinage
of West Pomerania1

Ducal heraldry in the coinage of West Pomerania is a research subject which
should not be overlooked in the Polish historiography due to the significance of
the coat of arms as the dynastie as well as State emblem and the coin as a symbol
of the political identity of West Pomerania. No exhaustive study dealing with the
subject-matter of both numismatics and heraldry has been published with regard to
the territory.2 In the present situation, the primary purpose of this article is to fili in
the current “blank” and provide a comprehensive overview of the evolution of the
dynastie coat of arms in the local coinage, beginning from the Middle Ages until
the dissolution of the Duchy of West Pomerania. The subject-matter in ąuestion
has been discussed against a background of the development of the contemporary
ducal heraldry.
There is only a fairly limited amount of literaturę, German and Polish, con-
cerning the development of the ducal coat of arms and coinage in West Pomerania.
The first academic research on the ducal emblem was undertaken in the 1830s by
J.G.L. Kosegarten.3 However, it had not been until the close of the 19th century that
the German historiography received the first comprehensiye study of this subject.