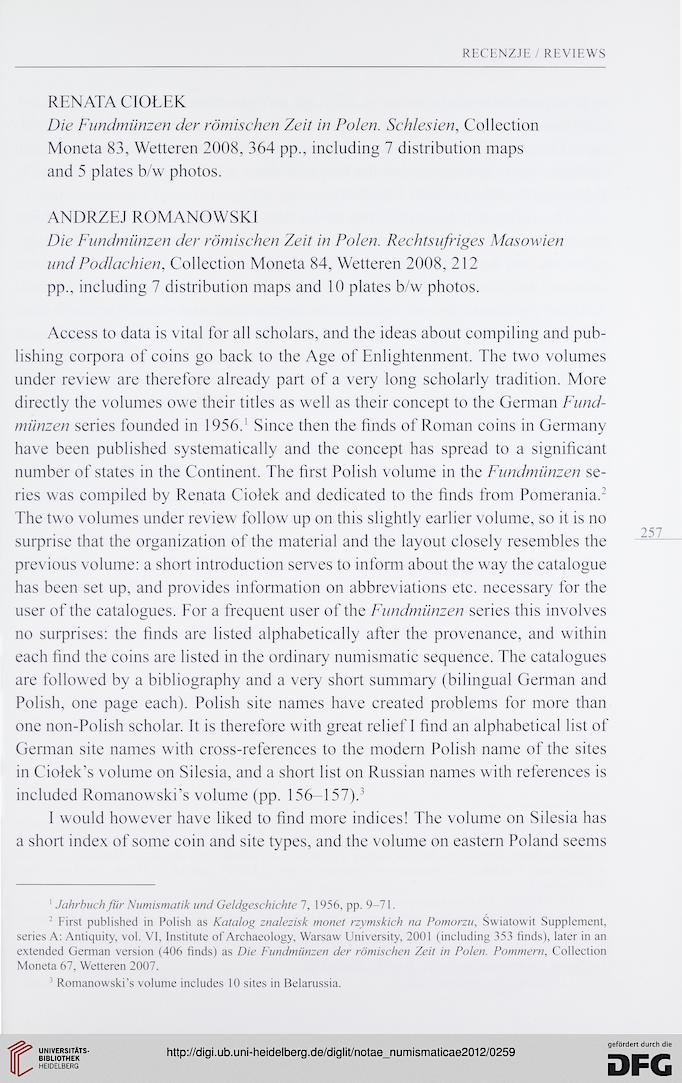 RENATA CIOŁEK
Die Fundmunzen der rómischen Zeit in Polen. Schlesien, Collection
Moneta 83, Wetteren 2008, 364 pp., including 7 distribution maps
and 5 plates b/w photos.
ANDRZEJ ROMANOWSKI
Die Fundmunzen der rómischen Zeit in Polen. Rechtsufriges Masowien
undPodlachien, Collection Moneta 84, Wetteren 2008, 212
pp., including 7 distribution maps and 10 plates b/w photos.
Access to data is vital for all scholars, and the ideas about compiling and pub-
lishing corpora of coins go back to the Age of Enlightenment. The two volumes
under review are therefore already part of a very long scholarly tradition. Morę
directly the volumes owe their titles as well as their concept to the German Fund-
munzen series founded in 19563 Since then the finds of Roman coins in Germany
have been published systematically and the concept has spread to a significant
number of States in the Continent. The first Polish volume in the Fundmunzen se-
ries was compiled by Renata Ciołek and dedicated to the finds from Pomerania.1 2 3
The two volumes under review follow up on this slightly earlier volume, so it is no
surprise that the organization of the materiał and the layout closely resembles the
previous volume: a short introduction serves to inform about the way the catalogue
has been set up, and provides information on abbreviations etc. necessary for the
user of the catalogues. For a freąuent user of the Fundmunzen series this involves
no surprises: the finds are listed alphabetically after the provenance, and within
each find the coins are listed in the ordinary numismatic seąuence. The catalogues
are followed by a bibliography and a very short summary (bilingual German and
Polish, one page each). Polish site names have created problems for morę than
one non-Polish scholar. It is therefore with great relief I find an alphabetical list of
German site names with cross-references to the modem Polish name of the sites
in Ciołek’s volume on Silesia, and a short list on Russian names with references is
included RomanowskEs volume (pp. 156-157)3
I would however have liked to find morę indices! The volume on Silesia has
a short index of some coin and site types, and the volume on eastern Poland seems