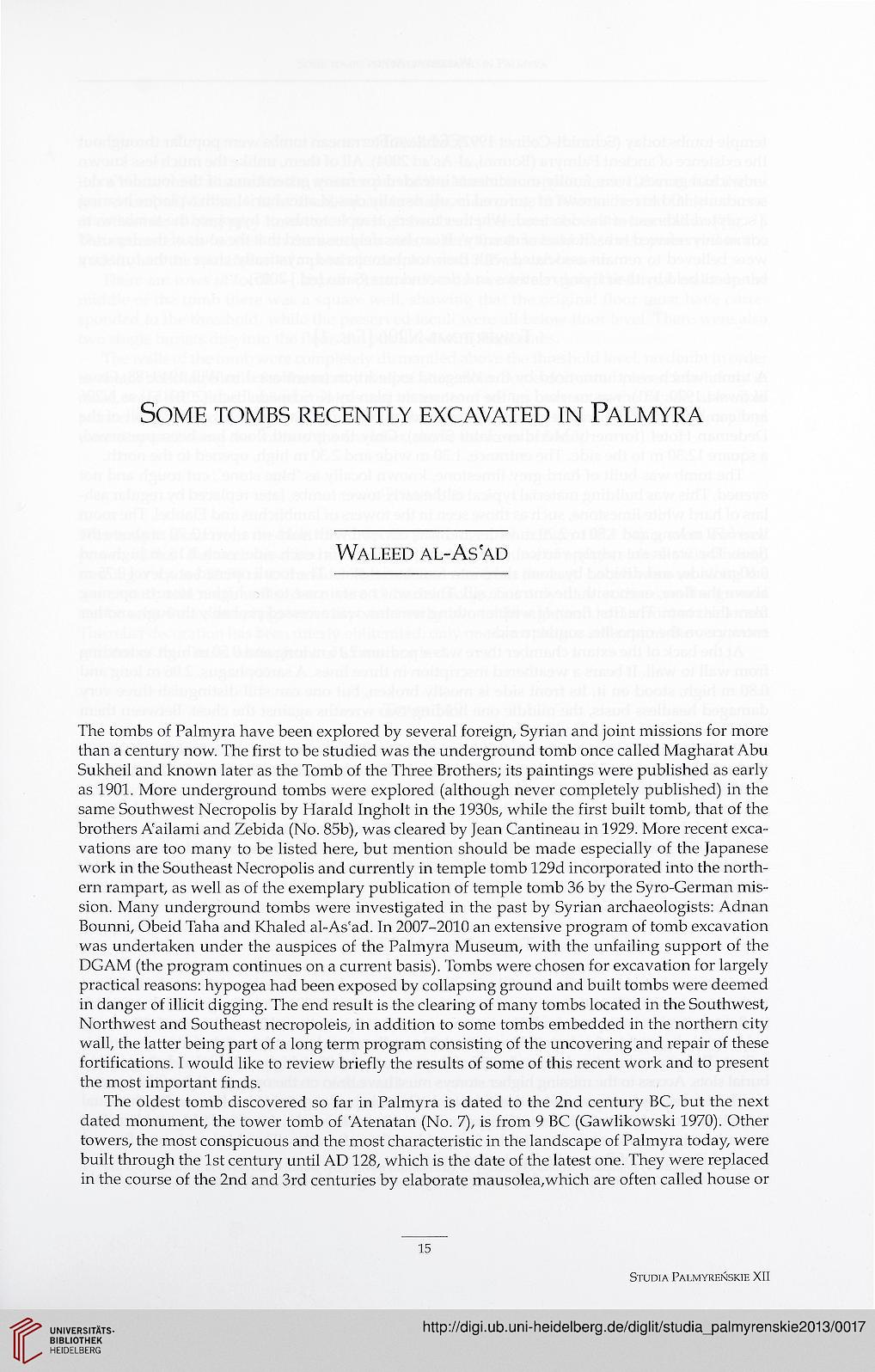 Information about OCR text
SOME TOMBS RECENTLY EXCAVATED IN PALMYRA

The tombs of Pałmyra have been explored by several foreign, Syrian and joint missions for morę
than a century now. The first to be studied was the underground tomb once called Magharat Abu
Sukheil and known later as the Tomb of the Three Brothers; its paintings were published as early
as 1901. Morę underground tombs were explored (although never completely published) in the
same Southwest Necropolis by Harald Ingholt in the 1930s, while the first built tomb, that of the
brothers Aailami and Zebida (No. 85b), was cleared by Jean Cantineau in 1929. Morę recent exca~
vations are too many to be listed here, but mention should be madę especially of the Japanese
work in the Southeast Necropolis and currently in tempie tomb 129d incorporated into the north-
ern rampart, as well as of the exemplary publication of tempie tomb 36 by the Syro-German mis-
sion. Many underground tombs were investigated in the past by Syrian archaeologists: Adnan
Bounni, Obeid Taha and Khaled al-As'ad. In 2007-2010 an extensive program of tomb excavation
was undertaken under the auspices of the Palmyra Museum, with the unfailing support of the
DGAM (the program continues on a current basis). Tombs were chosen for excavation for largely
practical reasons: hypogea had been exposed by collapsing ground and built tombs were deemed
in danger of illicit digging. The end result is the clearing of many tombs located in the Southwest,
Northwest and Southeast necropoleis, in addition to some tombs embedded in the northern city
wali, the latter being part of a long term program consisting of the uncovering and repair of these
fortifications. I would like to review briefly the results of some of this recent work and to present
the most important finds.

The oldest tomb discovered so far in Palmyra is dated to the 2nd century BC, but the next
dated monument, the tower tomb of Atenatan (No. 7), is from 9 BC (Gawlikowski 1970). Other
towers, the most conspicuous and the most characteristic in the landscape of Palmyra today, were
built through the lst century until AD 128, which is the datę of the latest one. They were replaced
in the course of the 2nd and 3rd centuries by elaborate mausolea,which are often called house or