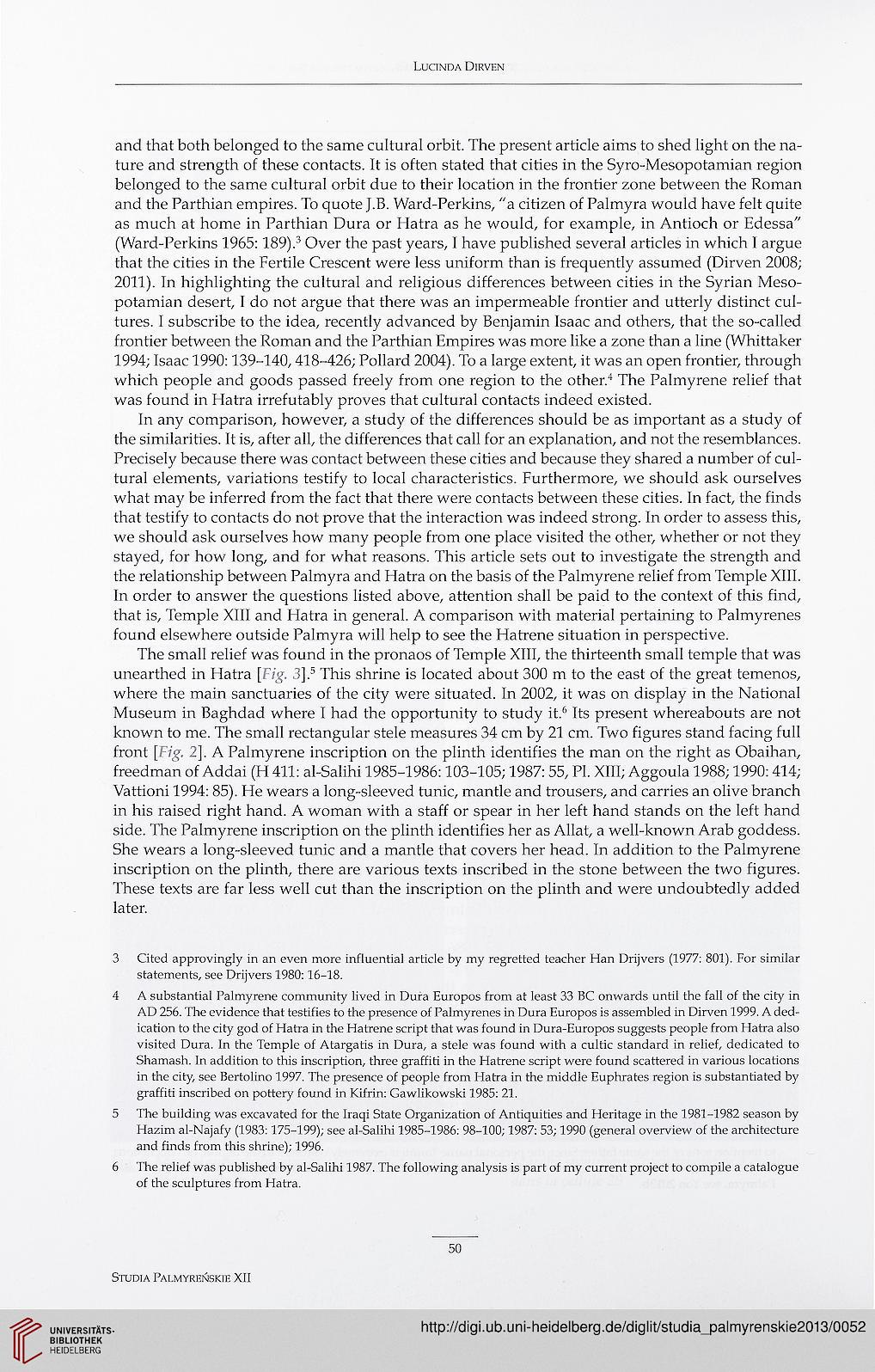 and that both belonged to the same cultural orbit. The present article aims to shed łight on the na-
turę and strength of these contacts. It is often stated that cities in the Syro-Mesopotamian region
belonged to the same cultural orbit due to their location in the frontier zonę between the Roman
and the Parthian empires. To ąuote J.B. Ward-Perkins, "a Citizen of Palmyra would have felt ąuite
as much at home in Parthian Dura or Hatra as he would, for example, in Antioch or Edessa"
(Ward-Perkins 1965:189).3 Over the past years, I have published several articles in which I argue
that the cities in the Fertile Crescent were less uniform than is freąuently assumed (Dirven 2008;
2011). In highlighting the cultural and religious differences between cities in the Syrian Meso-
potamian desert, I do not argue that there was an impermeable frontier and utterly distinct cul-
tures. I subscribe to the idea, recently advanced by Benjamin Isaac and others, that the so-called
frontier between the Roman and the Parthian Empires was morę like a zonę than a linę (Whittaker
1994; Isaac 1990:139-140,418-426; Pollard 2004). To a large extent, it was an open frontier, through
which people and goods passed freely from one region to the other.4 The Palmyrene relief that
was found in Hatra irrefutably proves that cultural contacts indeed existed.

In any comparison, however, a study of the differences should be as important as a study of
the similarities. It is, after all, the differences that cali for an explanation, and not the resemblances.
Precisely because there was contact between these cities and because they shared a number of cul-
tural elements, variations testify to local characteristics. Furthermore, we should ask ourselves
what may be inferred from the fact that there were contacts between these cities. In fact, the finds
that testify to contacts do not prove that the interaction was indeed strong. In order to assess this,
we should ask ourselves how many people from one place visited the other, whether or not they
stayed, for how long, and for what reasons. This article sets out to investigate the strength and
the relationship between Palmyra and Hatra on the basis of the Palmyrene relief from Tempie XIII.
In order to answer the ąuestions listed above, attention shall be paid to the context of this find,
that is. Tempie XIII and Hatra in generał. A comparison with materiał pertaining to Palmyrenes
found elsewhere outside Palmyra will help to see the Hatrene situation in perspective.

The smali relief was found in the pronaos of Tempie XIII, the thirteenth smali tempie that was
unearthed in Hatra [F/g. 3],5 This shrine is located about 300 m to the east of the great temenos,
where the main sanctuaries of the city were situated. In 2002, it was on display in the National
Museum in Baghdad where I had the opportunity to study it.6 Its present whereabouts are not
known to me. The smali rectangular stele measures 34 cm by 21 cm. Two figures stand facing fuli
front [ Ig. 2], A Palmyrene inscription on the plinth identifies the man on the right as Obaihan,
freedman of Addai (H 411: al-Salihi 1985-1986:103-105; 1987: 55, PI. XIII; Aggoula 1988; 1990:414;
Vattioni 1994: 85). He wears a long-sleeved tunic, mantle and trousers, and carries an olive branch
in his raised right hand. A woman with a staff or spear in her left hand stands on the left hand
side. The Palmyrene inscription on the plinth identifies her as Allat, a well-known Arab goddess.
She wears a long-sleeved tunic and a mantle that covers her head. In addition to the Palmyrene
inscription on the plinth, there are various texts inscribed in the stone between the two figures.
These texts are far less well cut than the inscription on the plinth and were undoubtedly added
later.

3 Cited approvingly in an even morę influential article by my regretted teacher Han Drijvers (1977: 801). For similar
statements, see Drijvers 1980:16-18.

4 A substantial Palmyrene community lived in Dura Europos from at least 33 BC onwards until the fali of the city in
AD 256. The evidence that testifies to the presence of Palmyrenes in Dura Europos is assembled in Dirven 1999. A ded-
ication to the city god of Hatra in the Hatrene script that was found in Dura-Europos suggests people from Hatra also
visited Dura. In the Tempie of Atargatis in Dura, a stele was found with a cultic standard in relief, dedicated to
Shamash. In addition to this inscription, three graffiti in the Hatrene script were found scattered in various locations
in the city, see Bertolino 1997. The presence of people from Hatra in the middle Euphrates region is substantiated by
graffiti inscribed on pottery found in Kifrin: Gawlikowski 1985: 21.

6 The relief was published by al-Salihi 1987. The following analysis is part of my current project to compile a catalogue
of the sculptures from Hatra.