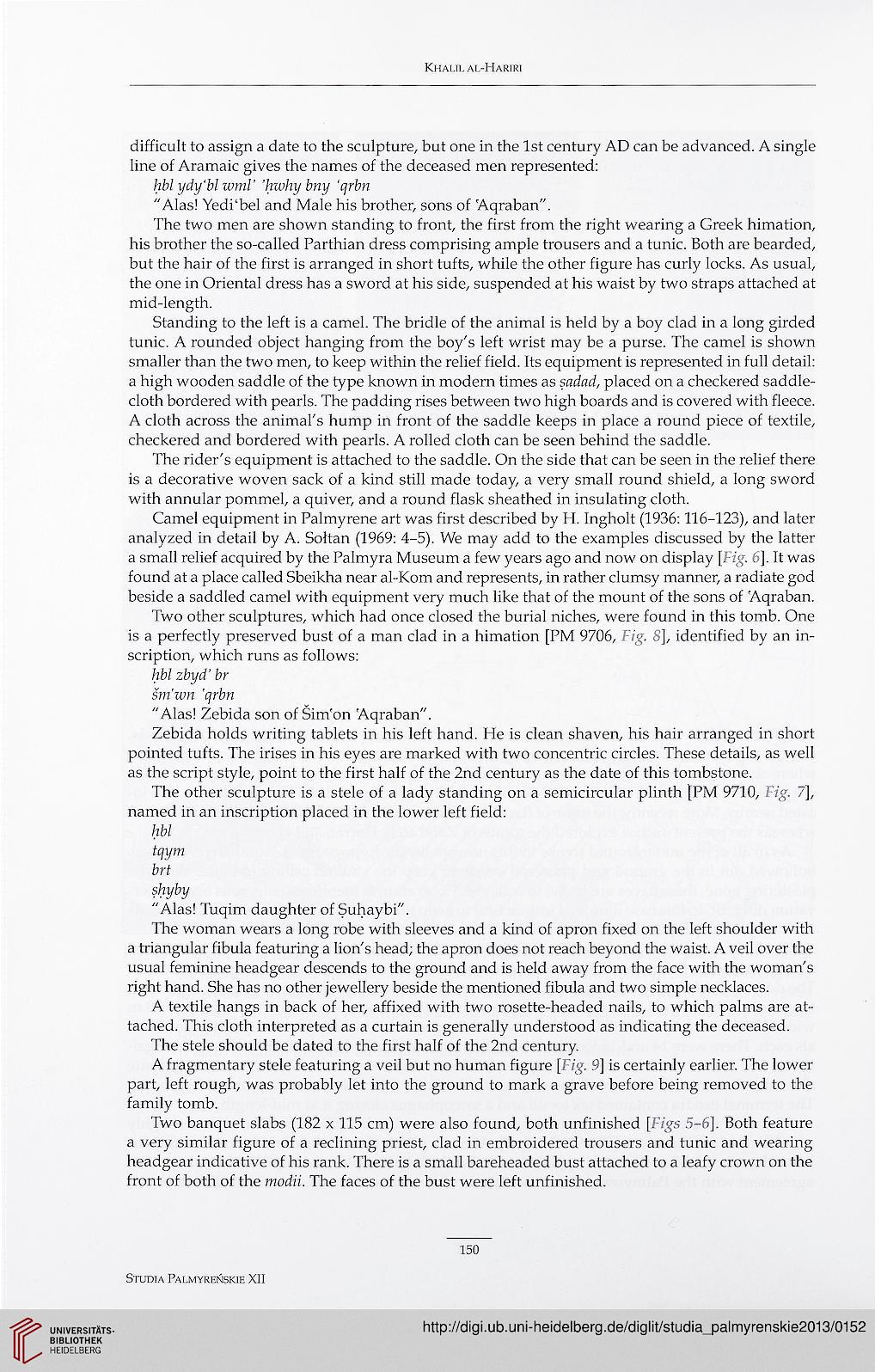 difficult to assign a datę to the sculpture, but one in the lst century AD can be advanced. A single
linę of Aramaic gives the names of the deceased men represented:
hbl ydy‘bl wml’ ’hwhy bny ‘qrbn

The two men are shown standing to front, the first from the right wearing a Greek himation,
his brother the so-called Parthian dress comprising ample trousers and a tunic. Both are bearded,
but the hair of the first is arranged in short tufts, while the other figurę has curly locks. As usual,
the one in Oriental dress has a sword at his side, suspended at his waist by two straps attached at
mid-length.

Standing to the left is a camel. The bridle of the animal is held by a boy clad in a long girded
tunic. A rounded object hanging from the boy's left wrist may be a purse. The camel is shown
smaller than the two men, to keep within the relief field. Its eąuipment is represented in fuli detail:
a high wooden saddle of the type known in modern times as sadad, placed on a checkered saddle-
cloth bordered with pearls. The padding rises between two high boards and is covered with fleece.
A cloth across the animaks hump in front of the saddle keeps in place a round piece of textile,
checkered and bordered with pearls. A rolled cloth can be seen behind the saddle.

The rider's eąuipment is attached to the saddle. On the side that can be seen in the relief there
is a decorative woven sack of a kind still madę today, a very smali round shield, a long sword
with annular pommel, a quiver, and a round fiask sheathed in insulating cloth.

Camel eąuipment in Palmyrene art was first described by H. Ingholt (1936:116-123), and later
analyzed in detail by A. Sołtan (1969: 4-5). We may add to the examples discussed by the latter
a smali relief acąuired by the Palmyra Museum a few years ago and now on display [Fig. 6], It was
found at a place called Sbeikha near al-Kom and represents, in rather clumsy manner, a radiate god
beside a saddled camel with eąuipment very much like that of the mount of the sons of Aąraban.

Two other sculptures, which had once closed the burial niches, were found in this tomb. One
is a perfectly preserved bust of a man clad in a himation [PM 9706, Fig. 8], identified by an in-
scription, which runs as follows:
hblzbyd’br
smwn fqrbn

Zebida holds writing tablets in his left hand. He is clean shaven, his hair arranged in short
pointed tufts. The irises in his eyes are marked with two concentric circles. These details, as well
as the script style, point to the first half of the 2nd century as the datę of this tombstone.

The other sculpture is a stele of a lady standing on a semicircular plinth [PM 9710, Fig. 7],
named in an inscription placed in the lower left field:
hbl
tqym
brt
shyby

The woman wears a long robę with sleeves and a kind of apron fixed on the left shoulder with
a triangular fibula featuring a lion's head; the apron does not reach beyond the waist. A veil over the
usual feminine headgear descends to the ground and is held away from the face with the woman's
right hand. She has no other jewellery beside the mentioned fibula and two simple necklaces.

A textile hangs in back of her, affixed with two rosette-headed nails, to which palms are at-
tached. This cloth interpreted as a curtain is generally understood as indicating the deceased.

The stele should be dated to the first half of the 2nd century.

A fragmentary stele featuring a veil but no human figurę [Fig. 9] is certainly earlier. The lower
part, left rough, was probably let into the ground to mark a grave before being removed to the
family tomb.

Two banąuet slabs (182 x 115 cm) were also found, both unfinished [F/gs 5-6]. Both feature
a very similar figurę of a reclining priest, clad in embroidered trousers and tunic and wearing
headgear indicative of his rank. There is a smali bareheaded bust attached to a leafy crown on the
front of both of the modii. The faces of the bust were left unfinished.