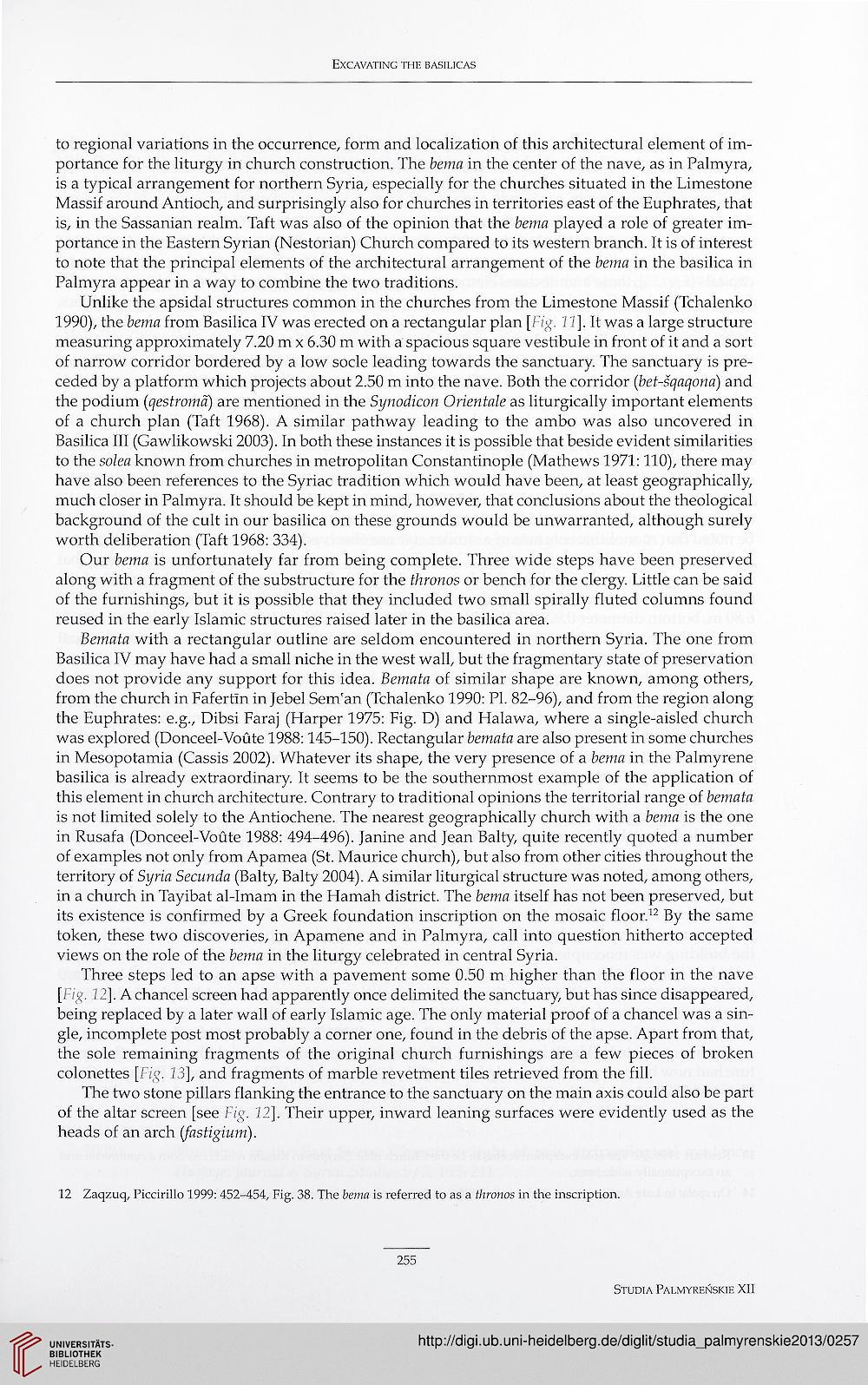 to regional variations in the occurrence, form and localization of this architectural element of im-
portance for the liturgy in church construction. The bema in the center of the nave, as in Palmyra,
is a typical arrangement for northern Syria, especially for the churches situated in the Limestone
Massif around Antioch, and surprisingly also for churches in territories east of the Euphrates, that
is, in the Sassanian realm. Taft was also of the opinion that the bema played a role of greater im-
portance in the Eastern Syrian (Nestorian) Church compared to its western branch. It is of interest
to notę that the principal elements of the architectural arrangement of the bema in the basilica in
Palmyra appear in a way to combine the two traditions.

Unlike the apsidal structures common in the churches from the Limestone Massif (Tchalenko
1990), the bema from Basilica IV was erected on a rectangular plan [Fig. 11]. It was a large structure
measuring approximately 7.20 m x 6.30 m with a spacious sąuare vestibule in front of it and a sort
of narrow corridor bordered by a Iow socle leading towards the sanctuary. The sanctuary is pre-
ceded by a platform which projects about 2.50 m into the nave. Both the corridor (bet-śyayona) and
the podium (yestroma) are mentioned in the Synodicon Orientale as liturgically important elements
of a church plan (Taft 1968). A similar pathway leading to the ambo was also uncovered in
Basilica III (Gawlikowski 2003). In both these instances it is possible that beside evident similarities
to the solea known from churches in metropolitan Constantinople (Mathews 1971:110), there may
have also been references to the Syriac tradition which would have been, at least geographically,
much closer in Palmyra. It should be kept in mind, however, that conclusions about the theological
background of the cult in our basilica on these grounds would be unwarranted, although surely
worth deliberation (Taft 1968: 334).

Our bema is unfortunately far from being complete. Three wide steps have been preserved
along with a fragment of the substructure for the thronos or bench for the clergy. Little can be said
of the furnishings, but it is possible that they included two smali spirally fluted columns found
reused in the early Islamie structures raised later in the basilica area.

Bernata with a rectangular outline are seldom encountered in northern Syria. The one from
Basilica IV may have had a smali niche in the west wali, but the fragmentary State of preservation
does not provide any support for this idea. Bernata of similar shape are known, among others,
from the church in Fafertin in Jebel SenTan (Tchalenko 1990: PI. 82-96), and from the region along
the Euphrates: e.g., Dibsi Faraj (Harper 1975: Fig. D) and Halawa, where a single-aisled church
was explored (Donceel~Voute 1988:145-150). Rectangular bemata are also present in some churches
in Mesopotamia (Cassis 2002). Whatever its shape, the very presence of a bema in the Palmyrene
basilica is already extraordinary. It seems to be the southernmost example of the application of
this element in church architecture. Contrary to traditional opinions the territorial rangę of bemata
is not limited solely to the Antiochene. The nearest geographically church with a bema is the one
in Rusafa (Donceel~Voute 1988: 494-496). Janinę and Jean Bałty, quite recently ąuoted a number
of examples not only from Apamea (St. Maurice church), but also from other cities throughout the
territory of Syria Secunda (Bałty, Bałty 2004). A similar liturgical structure was noted, among others,
in a church in Tayibat al-Imam in the Hamah district. The bema itself has not been preserved, but
its existence is confirmed by a Greek foundation inscription on the mosaic floor.12 By the same
token, these two discoveries, in Apamene and in Palmyra, cali into ąuestion hitherto accepted
views on the role of the bema in the liturgy celebrated in central Syria.

Three steps led to an apse with a pavement some 0.50 m higher than the floor in the nave
[Fig, 12], A chancel screen had apparently once delimited the sanctuary, but has sińce disappeared,
being replaced by a later wali of early Islamie age. The only materiał proof of a chancel was a sin-
gle, incomplete post most probably a corner one, found in the debris of the apse. Apart from that,
the sole remaining fragments of the original church furnishings are a few pieces of broken
colonettes [Fig. 13], and fragments of marble revetment tiles retrieved from the fili.

The two stone pillars flanking the entrance to the sanctuary on the main axis could also be part
of the altar screen [see Fig. 12]. Their upper, inward leaning surfaces were evidently used as the
heads of an arch (fastigium).