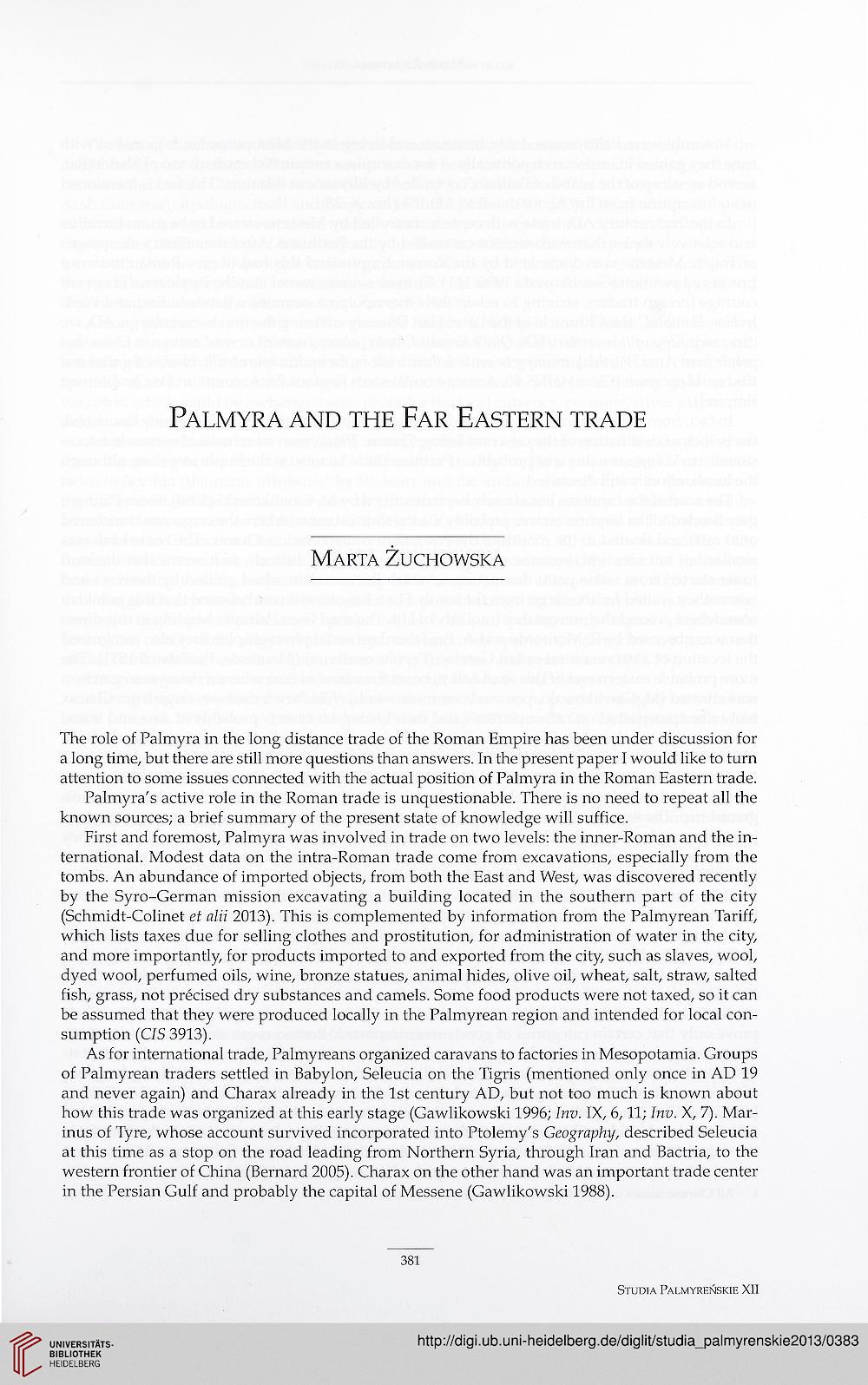 The role of Palmyra in the long distance trade of the Roman Empire has been under discussion for
a long tirne, but there are still morę ąuestions than answers. In the present paper I would like to turn
attention to some issues connected with the actual position of Palmyra in the Roman Eastern trade.

Palmyra's active role in the Roman trade is unąuestionable. There is no need to repeat all the
known sources; a brief summary of the present state of knowledge will suffice.

First and foremost, Palmyra was involved in trade on two levels: the inner-Roman and the in-
terna tional. Modest data on the intra-Roman trade come from excavations, especially from the
tombs. An abundance of imported objects, from both the East and West, was discovered recently
by the Syro-German mission excavating a building located in the Southern part of the city
(Schmidt-Colinet et dii 2013). This is complemented by information from the Palmyrean Tariff,
which lists taxes due for selling clothes and prostitution, for administration of water in the city,
and morę importantly, for products imported to and exported from the city, such as slaves, wool,
dyed wool, perfumed oils, winę, bronze statues, animal hides, olive oil, wheat, salt, straw, salted
fish, grass, not precised dry substances and camels. Some food products were not taxed, so it can
be assumed that they were produced locally in the Palmyrean region and intended for local con-
sumption (CIS 3913).

As for international trade, Palmyreans organized caravans to factories in Mesopotamia. Groups
of Palmyrean traders settled in Babylon, Seleucia on the Tigris (mentioned only once in AD 19
and never again) and Charax already in the lst century AD, but not too much is known about
ho w this trade was organized at this early stage (Gawlikowski 1996; Inv. IX, 6,11; Inv. X, 7). Mar-
inus of Tyre, whose account survived incorporated into Ptolemy's Geography, described Seleucia
at this time as a stop on the road leading from Northern Syria, through Iran and Bactria, to the
western frontier of China (Bernard 2005). Charax on the other hand was an important trade center
in the Persian Gulf and probably the Capital of Messene (Gawlikowski 1988).