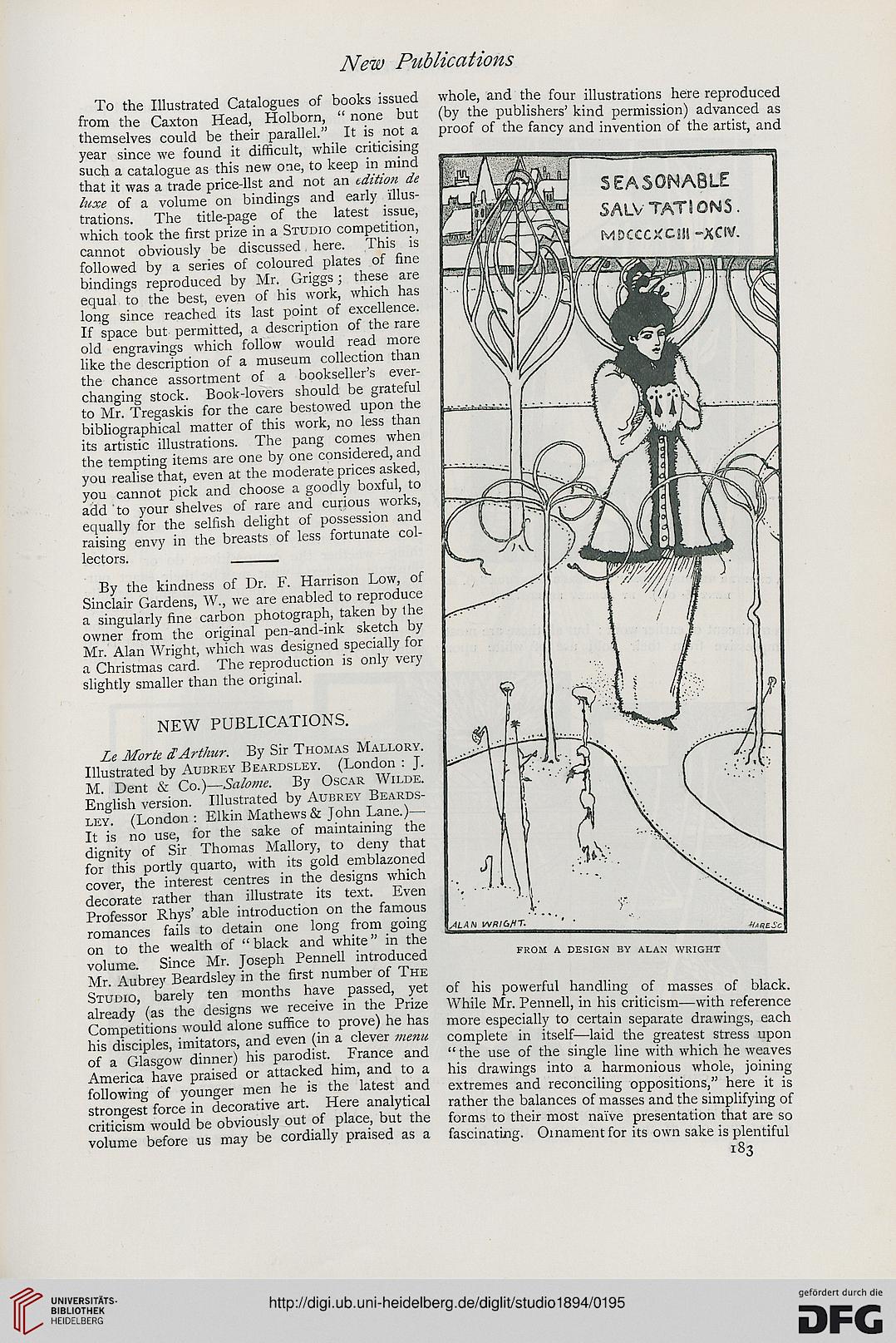 To the Illustrated Catalogues of books issued whole, and the four illustrations here reproduced
from the Caxton Head, Holborn, " none but (by the publishers' kind permission) advanced as
themselves could be their parallel." It is not a proof of the fancy and invention of the artist and
year since we found it difficult, while criticising
such a catalogue as this new one, to keep in mind
that it was a trade price-list and not an tdition de
luxe of a volume on bindings and early illus-
trations. The title-page of the latest issue,
which took the first prize in a Studio competition,
cannot obviously be discussed here. This is
followed by a series of coloured plates of fine
bindings reproduced by Mr. Griggs; these are
equal to the best, even of his work, which has
long since reached its last point of excellence.
If space but permitted, a description of the rare
old engravings which follow would read more
like the description of a museum collection than
the chance assortment of a bookseller's ever-
changing stock. Book-lovers should be grateful
to Mr. Tregaskis for the care bestowed upon the
bibliographical matter of this work, no less than
its artistic illustrations. The pang comes when
the tempting items are one by one considered, and
you realise that, even at the moderate prices asked,
you cannot pick and choose a goodly boxful, to
add to your shelves of rare and curious works,
equally for the selfish delight of possession and
raising envy in the breasts of less fortunate col-
lectors. _

By the kindness of Dr. F. Harrison Low, of
Sinclair Gardens, W., we are enabled to reproduce
a singularly fine carbon photograph, taken by the
owner from the original pen-and-ink sketch by
Mr. Alan Wright, which was designed specially for
a Christmas card. The reproduction is only very
slightly smaller than the original.

Le Morte d! Arthur. By Sir Thomas Mallory.
Illustrated by Aubrey Beardsley. (London : J.
M. Dent & Co.)—Salome. By Oscar Wilde.
English version. Illustrated by Aubrey Beards-
ley. (London : Elkin Mathews & John Lane.)—
It is no use, for the sake of maintaining the
dignity of Sir Thomas Mallory, to deny that
for this portly quarto, with its gold emblazoned
cover, the interest centres in the designs which
decorate rather than illustrate its text. Even
Professor Rhys' able introduction on the famous
romances fails to detain one long from going
on to the wealth of " black and white" in the

Mr. Aubrey Beardsley in the first number of The

Studio, barely ten months have passed, yet of his powerful handling of masses of black
already (as the designs we receive in the Prize While Mr. Pennell, in his criticism—with reference
Competitions would alone suffice to prove) he has more especially to certain separate drawings each
his disciples, imitators, and even (in a clever menu complete in itself—laid the greatest stress' uoon
of a Glasgow dinner) his parodist. France and "the use of the single line with which he weaves
America have praised or attacked him and to a his drawings into a harmonious whole ioinincr
following of younger men he is the latest and extremes and reconciling oppositions " here it is
strongest force in decorative art. Here analytical rather the balances of masses and the simplifying of
criticism would be obviously out of place, but the forms to their most naive presentation that are so
volume before us may be cordially praised as a fascinating. Ornament for its own sake is plentiful