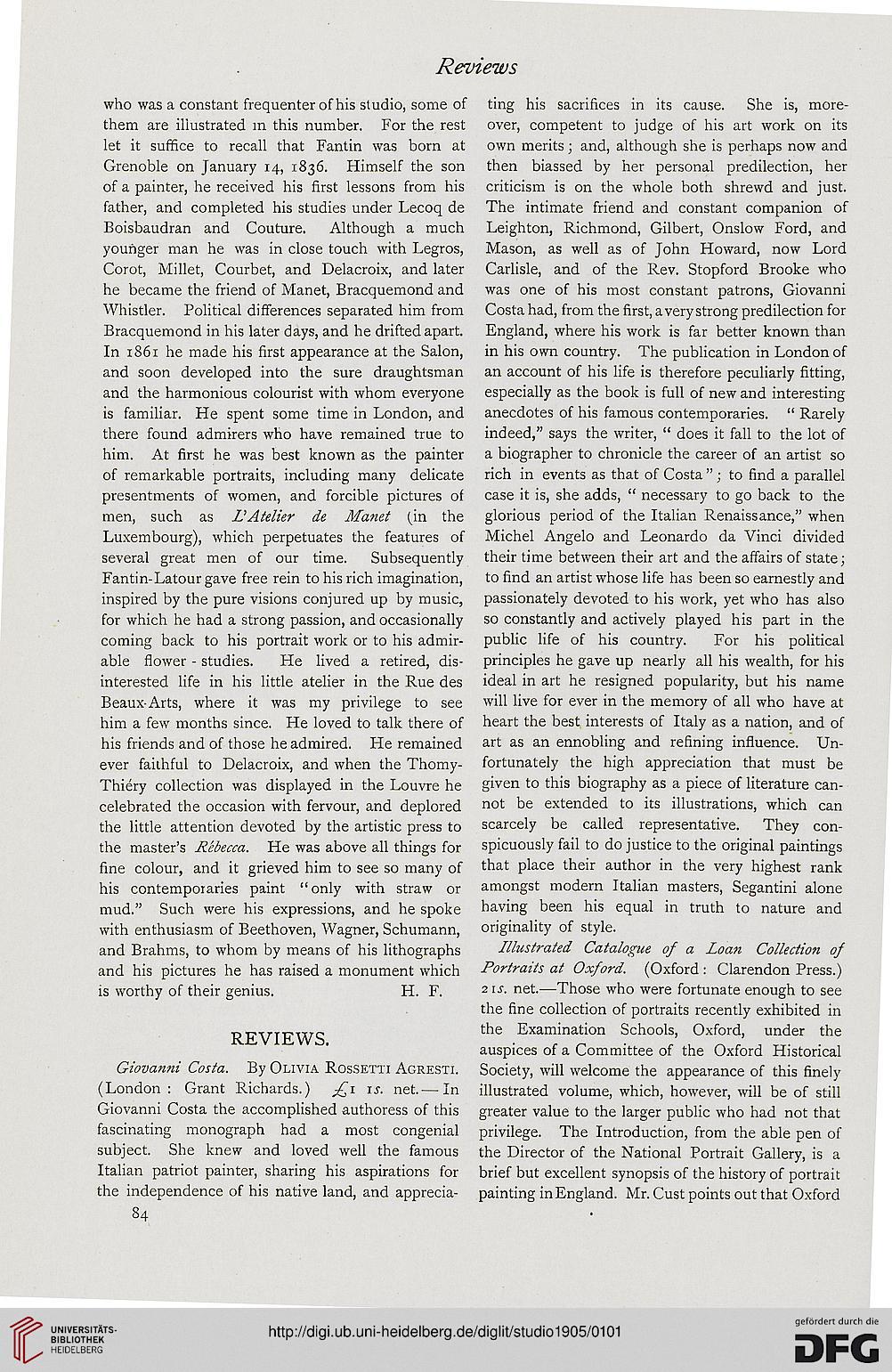 who was a constant frequenter of his studio, some of
them are illustrated in this number. For the rest
let it suffice to recall that Fantin was born at
Grenoble on January 14, 1836. Himself the son
of a painter, he received his first lessons from his
father, and completed his studies under Lecoq de
Boisbaudran and Couture. Although a much
younger man he was in close touch with Legros,
Corot, Millet, Courbet, and Delacroix, and later
he became the friend of Manet, Bracquemond and
Whistler. Political differences separated him from
Bracquemond in his later days, and he drifted apart.
In 1861 he made his first appearance at the Salon,
and soon developed into the sure draughtsman
and the harmonious colourist with whom everyone
is familiar. He spent some time in London, and
there found admirers who have remained true to
him. At first he was best known as the painter
of remarkable portraits, including many delicate
presentments of women, and forcible pictures of
men, such as U Atelier de Manet (Jn the
Luxembourg), which perpetuates the features of
several great men of our time. Subsequently
Fantin-Latourgave free rein to his rich imagination,
inspired by the pure visions conjured up by music,
for which he had a strong passion, and occasionally
coming back to his portrait work or to his admir-
able flower - studies. He lived a retired, dis-
interested life in his little atelier in the Rue des
Beaux-Arts, where it was my privilege to see
him a few months since. He loved to talk there of
his friends and of those he admired. He remained
ever faithful to Delacroix, and when the Thomy-
Thiery collection was displayed in the Louvre he
celebrated the occasion with fervour, and deplored
the little attention devoted by the artistic press to
the master's Rebecca. He was above all things for
fine colour, and it grieved him to see so many of
his contemporaries paint "only with straw or
mud." Such were his expressions, and he spoke
with enthusiasm of Beethoven, Wagner, Schumann,
and Brahms, to whom by means of his lithographs
and his pictures he has raised a monument which
is worthy of their genius. H. F.

Giovanni Costa. By Olivia Rossetti Agresti.
(London: Grant Richards.) jQt is. net.— In
Giovanni Costa the accomplished authoress of this
fascinating monograph had a most congenial
subject. She knew and loved well the famous
Italian patriot painter, sharing his aspirations for
the independence of his native land, and apprecia-
84

ting his sacrifices in its cause. She is, more-
over, competent to judge of his art work on its
own merits; and, although she is perhaps now and
then biassed by her personal predilection, her
criticism is on the whole both shrewd and just.
The intimate friend and constant companion of
Leighton, Richmond, Gilbert, Onslow Ford, and
Mason, as well as of John Howard, now Lord
Carlisle, and of the Rev. Stopford Brooke who
was one of his most constant patrons, Giovanni
Costa had, from the first, a very strong predilection for
England, where his work is far better known than
in his own country. The publication in London of
an account of his life is therefore peculiarly fitting,
especially as the book is full of new and interesting
anecdotes of his famous contemporaries. " Rarely
indeed," says the writer, " does it fall to the lot of
a biographer to chronicle the career of an artist so
rich in events as that of Costa " ; to find a parallel
case it is, she adds, " necessary to go back to the
glorious period of the Italian Renaissance," when
Michel Angelo and Leonardo da Vinci divided
their time between their art and the affairs of state;
to find an artist whose life has been so earnestly and
passionately devoted to his work, yet who has also
so constantly and actively played his part in the
public life of his country. For his political
principles he gave up nearly all his wealth, for his
ideal in art he resigned popularity, but his name
will live for ever in the memory of all who have at
heart the best interests of Italy as a nation, and of
art as an ennobling and refining influence. Un-
fortunately the high appreciation that must be
given to this biography as a piece of literature can-
not be extended to its illustrations, which can
scarcely be called representative. They con-
spicuously fail to do justice to the original paintings
that place their author in the very highest rank
amongst modern Italian masters, Segantini alone
having been his equal in truth to nature and
originality of style.

Illustrated Catalogue of a Loan Collection of
Portraits at Oxford. (Oxford : Clarendon Press.)
2 is. net.—Those who were fortunate enough to see
the fine collection of portraits recently exhibited in
the Examination Schools, Oxford, under the
auspices of a Committee of the Oxford Historical
Society, will welcome the appearance of this finely
illustrated volume, which, however, will be of still
greater value to the larger public who had not that
privilege. The Introduction, from the able pen of
the Director of the National Portrait Gallery, is a
brief but excellent synopsis of the history of portrait
painting in England. Mr. Cust points out that Oxford