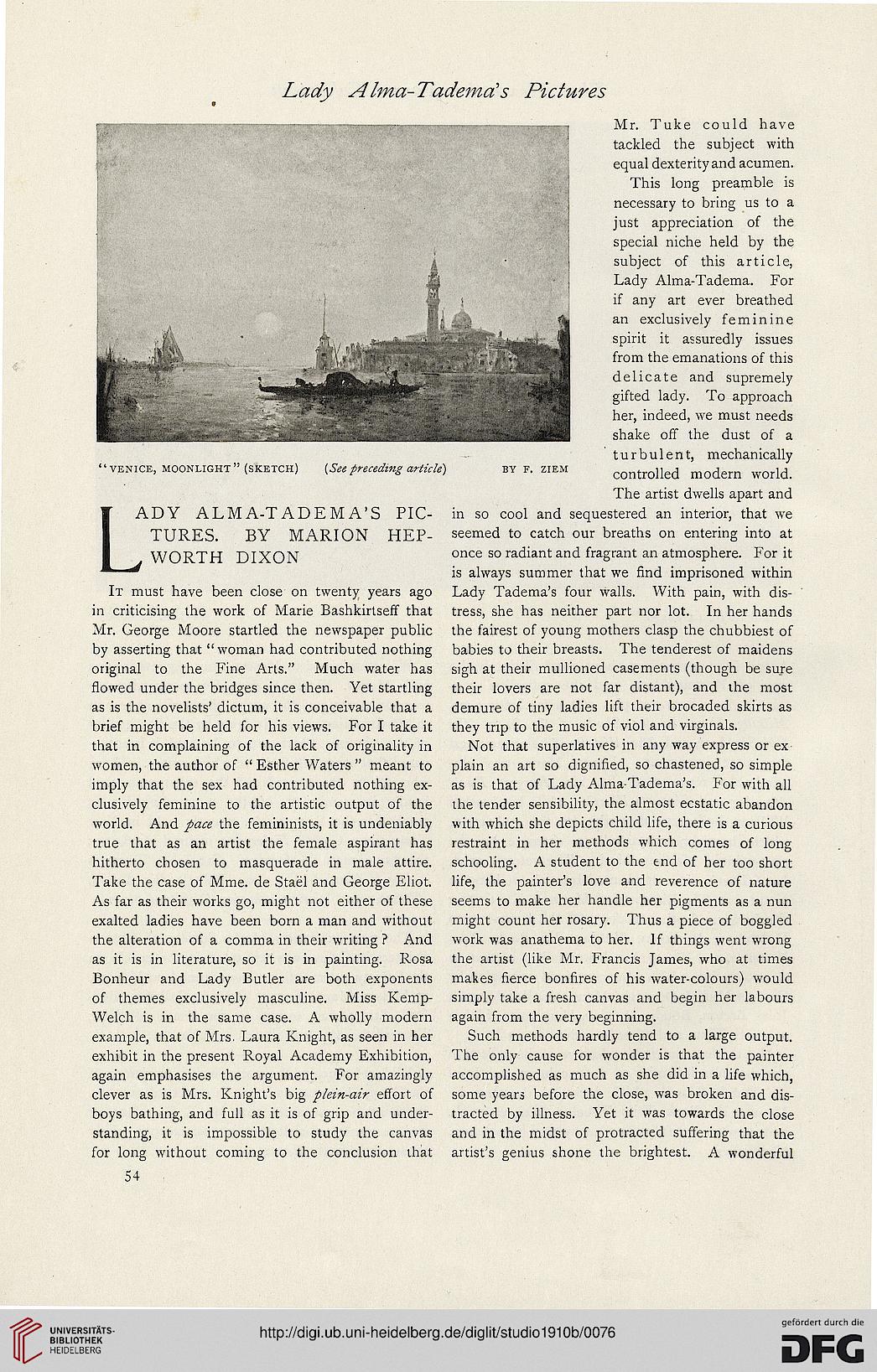 It must have been close on twenty years ago
in criticising the work of Marie Bashkirtseff that
Mr. George Moore startled the newspaper public
by asserting that “woman had contributed nothing
original to the Fine Arts.” Much water has
flowed under the bridges since then. Yet startling
as is the novelists’ dictum, it is conceivable that a
brief might be held for his views. For I take it
that in complaining of the lack of originality in
women, the author of “ Esther Waters ” meant to
imply that the sex had contributed nothing ex-
clusively feminine to the artistic output of the
world. And pace the femininists, it is undeniably
true that as an artist the female aspirant has
hitherto chosen to masquerade in male attire.
Take the case of Mme. de Stael and George Eliot.
As far as their works go, might not either of these
exalted ladies have been born a man and without
the alteration of a comma in their writing ? And
as it is in literature, so it is in painting. Rosa
Bonheur and Lady Butler are both exponents
of themes exclusively masculine. Miss Kemp-
Welch is in the same case. A wholly modern
example, that of Mrs, Laura Knight, as seen in her
exhibit in the present Royal Academy Exhibition,
again emphasises the argument. For amazingly
clever as is Mrs. Knight’s big plein-air effort of
boys bathing, and full as it is of grip and under-
standing, it is impossible to study the canvas
for long without coming to the conclusion that
54

This long preamble is
necessary to bring us to a
just appreciation of the
special niche held by the
subject of this article,
Lady Alma-Tadema. For
if any art ever breathed
an exclus ively feminine
spirit it assuredly issues
from the emanations of this
delicate and supremely
gifted lady. To approach
her, indeed, we must needs
shake off the dust of a
turbulent, mechanically
controlled modern world.
The artist dwells apart and
in so cool and sequestered an interior, that we
seemed to catch our breaths on entering into at
once so radiant and fragrant an atmosphere. For it
is always summer that we find imprisoned within
Lady Tadema’s four walls. With pain, with dis-
tress, she has neither part nor lot. In her hands
the fairest of young mothers clasp the chubbiest of
babies to their breasts. The tenderest of maidens
sigh at their mullioned casements (though be sure
their lovers are not far distant), and the most
demure of tiny ladies lift their brocaded skirts as
they trip to the music of viol and virginals.

Not that superlatives in any way express or ex
plain an art so dignified, so chastened, so simple
as is that of Lady Alma-Tadema’s. For with all
the tender sensibility, the almost ecstatic abandon
with which she depicts child life, there is a curious
restraint in her methods which comes of long
schooling. A student to the end of her too short
life, the painter’s love and reverence of nature
seems to make her handle her pigments as a nun
might count her rosary. Thus a piece of boggled
work was anathema to her. If things went wrong
the artist (like Mr. Francis James, who at times
makes fierce bonfires of his water-colours) would
simply take a fresh canvas and begin her labours
again from the very beginning.

Such methods hardly tend to a large output.
The only cause for wonder is that the painter
accomplished as much as she did in a life which,
some years before the close, was broken and dis-
tracted by illness. Yet it was towards the close
and in the midst of protracted suffering that the
artist’s genius shone the brightest. A wonderful