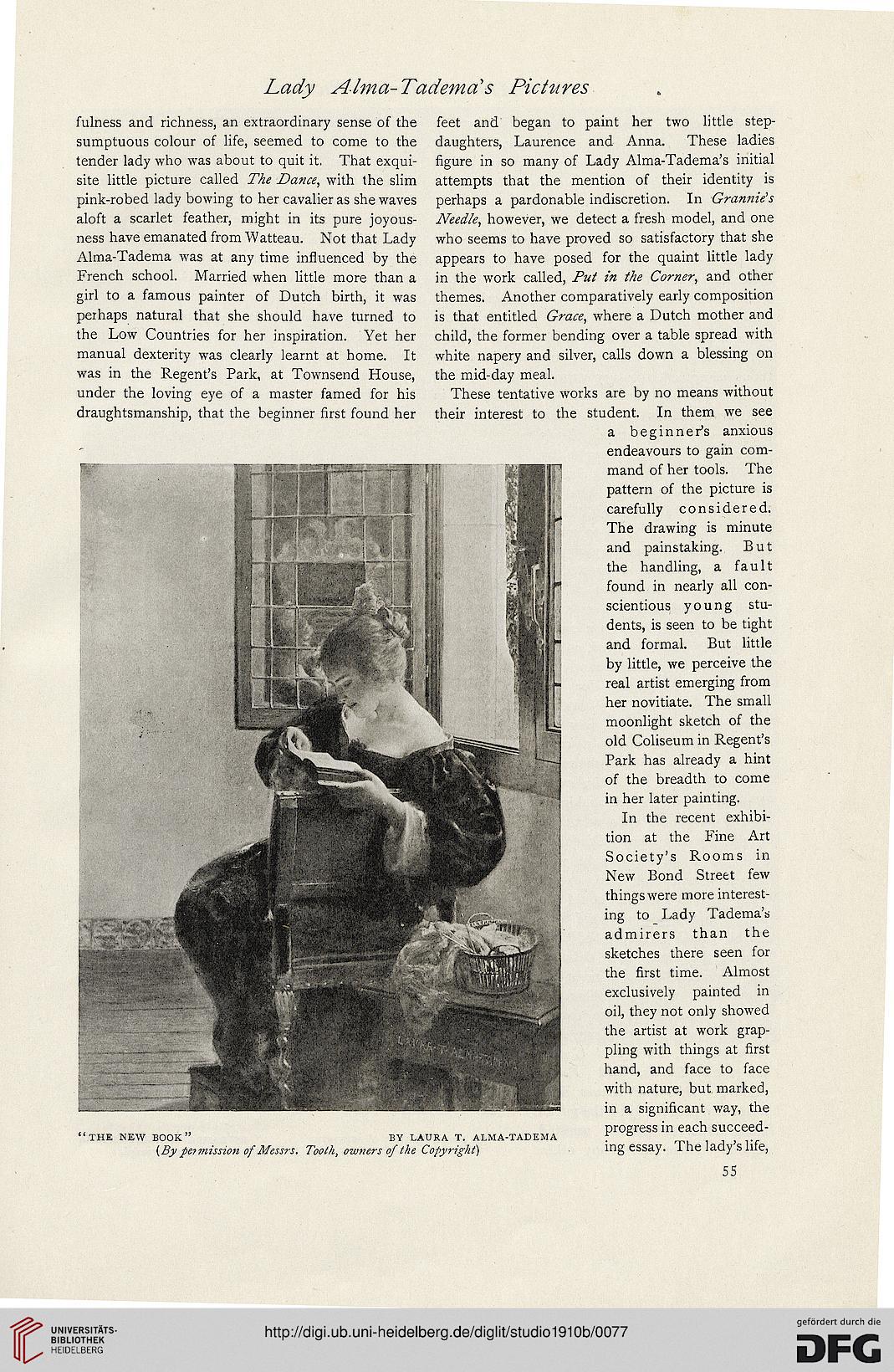 fulness and richness, an extraordinary sense of the
sumptuous colour of life, seemed to come to the
tender lady who wras about to quit it. That exqui-
site little picture called The Dance, with the slim
pink-robed lady bowing to her cavalier as she waves
aloft a scarlet feather, might in its pure joyous-
ness have emanated from Watteau. Not that Lady
Alma-Tadema was at any time influenced by the
French school. Married when little more than a
girl to a famous painter of Dutch birth, it was
perhaps natural that she should have turned to
the Low Countries for her inspiration. Yet her
manual dexterity was clearly learnt at home. It
was in the Regent’s Park, at Townsend House,
under the loving eye of a master famed for his
draughtsmanship, that the beginner first found her

feet and began to paint her two little step-
daughters, Laurence and Anna. These ladies
figure in so many of Lady Alma-Tadema’s initial
attempts that the mention of their identity is
perhaps a pardonable indiscretion. In Grannie's
Needle, however, we detect a fresh model, and one
who seems to have proved so satisfactory that she
appears to have posed for the quaint little lady
in the work called, Put in the Corner, and other
themes. Another comparatively early composition
is that entitled Grace, where a Dutch mother and
child, the former bending over a table spread with
white napery and silver, calls down a blessing on
the mid-day meal.

These tentative works are by no means without
their interest to the student. In them we see
a beginner’s anxious
endeavours to gain com-
mand of her tools. The
pattern of the picture is
carefully considered.
The drawing is minute
and painstaking. But
the handling, a fault
found in nearly all con-
scientious young stu-
dents, is seen to be tight
and formal. But little
by little, we perceive the
real artist emerging from
her novitiate. The small
moonlight sketch of the
old Coliseum in Regent’s
Park has already a hint
of the breadth to come
in her later painting.

In the recent exhibi-
tion at the Fine Art
Society’s Rooms in
New Bond Street few
things were more interest-
ing to Lady Tadema’s
admirers than the
sketches there seen for
the first time. Almost
exclusively painted in
oil, they not only showed
the artist at work grap-
pling with things at first
hand, and face to face
with nature, but marked,
in a significant way, the
progress in each succeed-
ing essay. The lady’s life,

{By permission of Messrs. Tooth, owners of the Copyright)