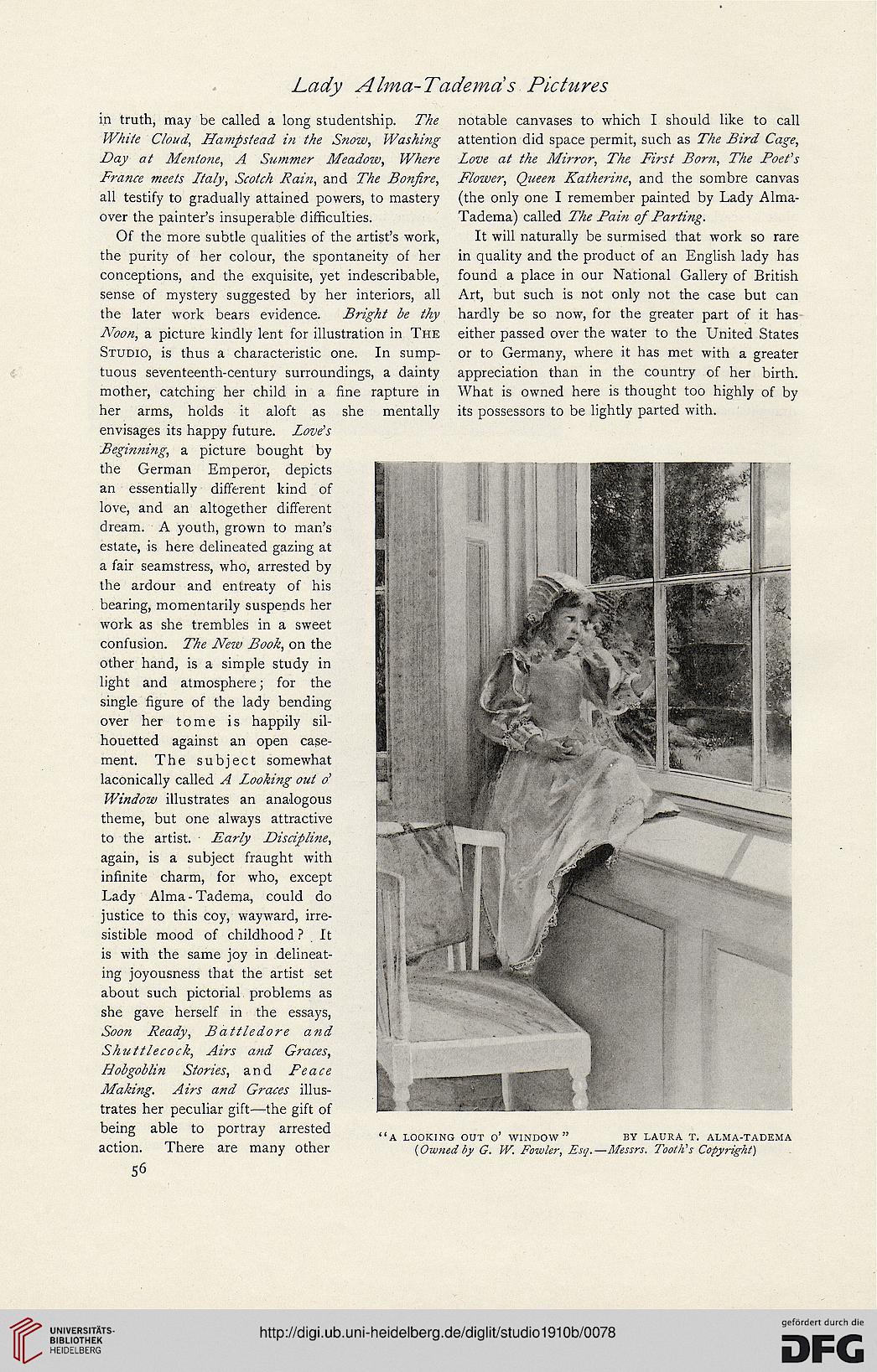 in truth, may be called a long studentship. The
White Cloud., Hampstead in the Snow, Washing
Day at Mentone, A Summer Meadow, Where
France meets Italy, Scotch Rain, and The Bonfire,
all testify to gradually attained powers, to mastery
over the painter’s insuperable difficulties.

Of the more subtle qualities of the artist’s work,
the purity of her colour, the spontaneity of her
conceptions, and the exquisite, yet indescribable,
sense of mystery suggested by her interiors, all
the later work bears evidence. Bright be thy
Noon, a picture kindly lent for illustration in The
Studio, is thus a characteristic one. In sump-
tuous seventeenth-century surroundings, a dainty
mother, catching her child in a fine rapture in
her arms, holds it aloft as she mentally
envisages its happy future. Love's
Beginning, a picture bought by
the German Emperor, depicts
an essentially different kind of
love, and an altogether different
dream. A youth, grown to man’s
estate, is here delineated gazing at
a fair seamstress, who, arrested by
the ardour and entreaty of his
bearing, momentarily suspends her
work as she trembles in a sweet
confusion. The New Book, on the
other hand, is a simple study in
light and atmosphere; for the
single figure of the lady bending
over her tome is happily sil-
houetted against an open case-
ment. The subject somewhat
laconically called A Looking out o'

Window illustrates an analogous
theme, but one always attractive
to the artist. Early Discipline,
again, is a subject fraught with
infinite charm, for who, except
Lady Alma-Tadema, could do
justice to this coy, wayward, irre-
sistible mood of childhood ? It
is with the same joy in delineat-
ing joyousness that the artist set
about such pictorial problems as
she gave herself in the essays,

Hobgoblin Stories, and Peace
Making. Airs and Graces illus-
trates her peculiar gift—the gift of
being able to portray arrested
action. There are many other

notable canvases to which I should like to call
attention did space permit, such as The Bird Cage,
Love at the Mirror, The First Born, The Poet's
Flower, Queen Katherine, and the sombre canvas
(the only one I remember painted by Lady Alma-
Tadema) called The Pain of Parting.

It will naturally be surmised that work so rare
in quality and the product of an English lady has
found a place in our National Gallery of British
Art, but such is not only not the case but can
hardly be so now, for the greater part of it has
either passed over the water to the United States
or to Germany, where it has met with a greater
appreciation than in the country of her birth.
What is owned here is thought too highly of by
its possessors to be lightly parted with.

“a looking out o’ window
(Owned by G.