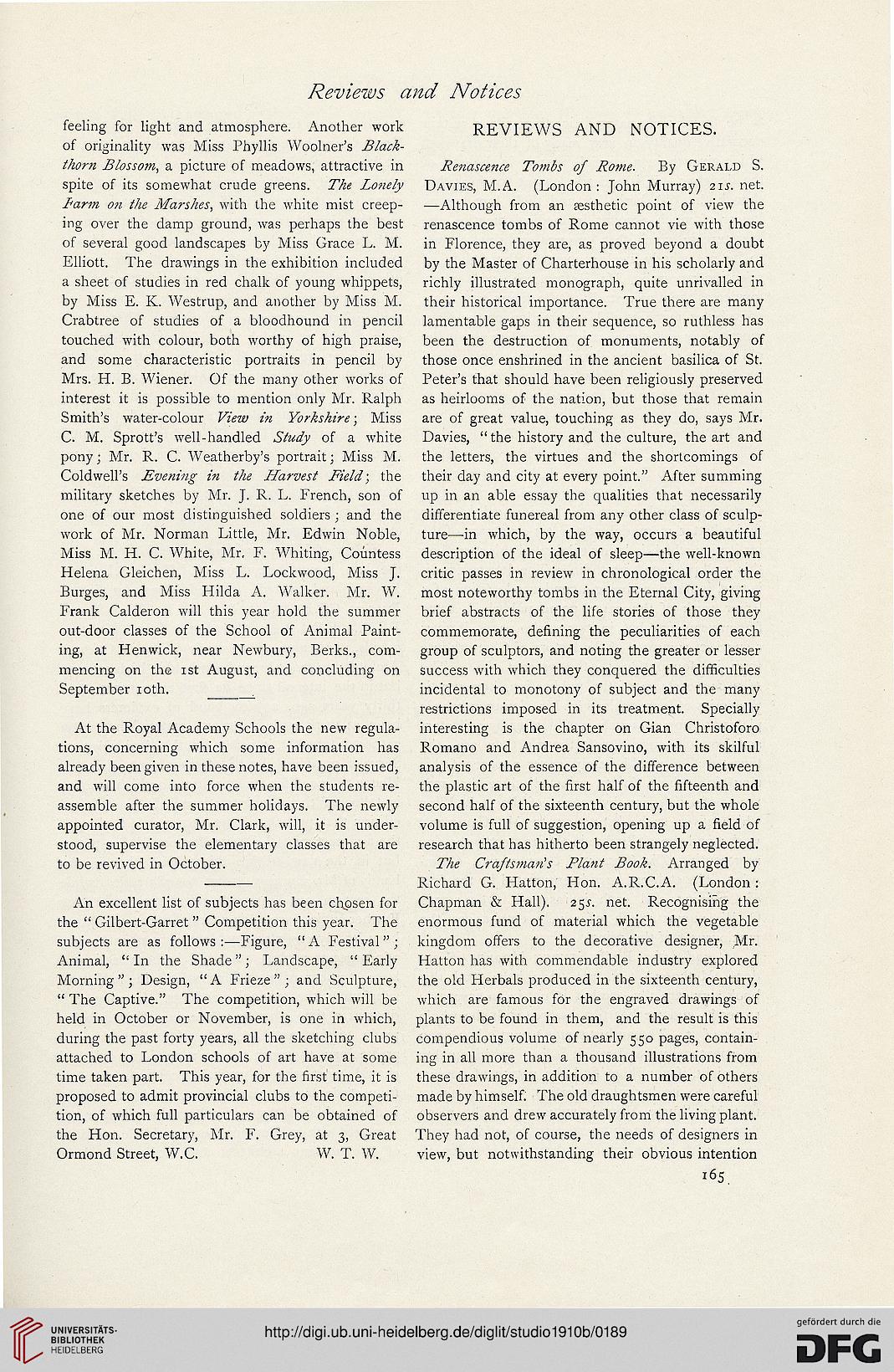 feeling for light and atmosphere. Another work
of originality was Miss Phyllis Woolner’s Black-
thorn Blossom, a picture of meadows, attractive in
spite of its somewhat crude greens. The Lonely
Barm on the Marshes, with the white mist creep-
ing over the damp ground, was perhaps the best
of several good landscapes by Miss Grace L. M.
Elliott. The drawings in the exhibition included
a sheet of studies in red chalk of young whippets,
by Miss E. K. Westrup, and another by Miss M.
Crabtree of studies of a bloodhound in pencil
touched with colour, both worthy of high praise,
and some characteristic portraits in pencil by
Mrs. H. B. Wiener. Of the many other works of
interest it is possible to mention only Mr. Ralph
Smith’s water-colour View in Yorkshire; Miss
C. M. Sprott’s well-handled Study of a white
pony; Mr. R. C. Weatherby’s portrait; Miss M.
ColdwelPs Evening in the Harvest Field-, the
military sketches by Mr. J. R. L. French, son of
one of our most distinguished soldiers ; and the
work of Mr. Norman Little, Mr. Edwin Noble,
Miss M. H. C. White, Mr, F. Whiting, Countess
Helena Gleichen, Miss L. Lockwood, Miss J.
Burges, and Miss Hilda A. Walker. Mr. W.
Frank Calderon will this year hold the summer
out-door classes of the School of Animal Paint-
ing, at Henwick, near Newbury, Berks., com-
mencing on the ist August, and concluding on
September roth.

At the Royal Academy Schools the new regula-
tions, concerning which some information has
already been given in these notes, have been issued,
and will come into force when the students re-
assemble after the summer holidays. The newly
appointed curator, Mr. Clark, will, it is under-
stood, supervise the elementary classes that are
to be revived in October.

An excellent list of subjects has been chosen for
the “ Gilbert-Garret ” Competition this year. The
subjects are as follows:—Figure, “A Festival”;
Animal, “ In the Shade ”; Landscape, “ Early
Morning ” ; Design, “ A Frieze ” ; and Sculpture,
“ The Captive.” The competition, which will be
held in October or November, is one in which,
during the past forty years, all the sketching clubs
attached to London schools of art have at some
time taken part. This year, for the first time, it is
proposed to admit provincial clubs to the competi-
tion, of which full particulars can be obtained of
the Hon. Secretary, Mr. F. Grey, at 3, Great
Ormond Street, W.C. W. T. W.

Renascence Tombs of Rome. By Gerald S.
Davies, M.A. (London: John Murray) 21 r. net.
—Although from an aesthetic point of view the
renascence tombs of Rome cannot vie with those
in Florence, they are, as proved beyond a doubt
by the Master of Charterhouse in his scholarly and
richly illustrated monograph, quite unrivalled in
their historical importance. True there are many
lamentable gaps in their sequence, so ruthless has
been the destruction of monuments, notably of
those once enshrined in the ancient basilica of St.
Peter’s that should have been religiously preserved
as heirlooms of the nation, but those that remain
are of great value, touching as they do, says Mr.
Davies, “the history and the culture, the art and
the letters, the virtues and the shortcomings of
their day and city at every point.” After summing
up in an able essay the qualities that necessarily
differentiate funereal from any other class of sculp-
ture—in which, by the way, occurs a beautiful
description of the ideal of sleep—the well-known
critic passes in review in chronological order the
most noteworthy tombs in the Eternal City, giving
brief abstracts of the life stories of those they
commemorate, defining the peculiarities of each
group of sculptors, and noting the greater or lesser
success with which they conquered the difficulties
incidental to monotony of subject and the many
restrictions imposed in its treatment. Specially
interesting is the chapter on Gian Christoforo
Romano and Andrea Sansovino, with its skilful
analysis of the essence of the difference between
the plastic art of the first half of the fifteenth and
second half of the sixteenth century, but the whole
volume is full of suggestion, opening up a field of
research that has hitherto been strangely neglected.

The Craftsman's Plant Book. Arranged by
Richard G. Hatton, Hon. A.R.C.A. (London :
Chapman & Hall). 25^. net. Recognising the
enormous fund of material which the vegetable
kingdom offers to the decorative designer, Mr.
Hatton has with commendable industry explored
the old Herbals produced in the sixteenth century,
which are famous for the engraved drawings of
plants to be found in them, and the result is this
compendious volume of nearly 550 pages, contain-
ing in all more than a thousand illustrations from
these drawings, in addition to a number of others
made by himself. The old draughtsmen were careful
observers and drew accurately from the living plant.
They had not, of course, the needs of designers in
view, but notwithstanding their obvious intention