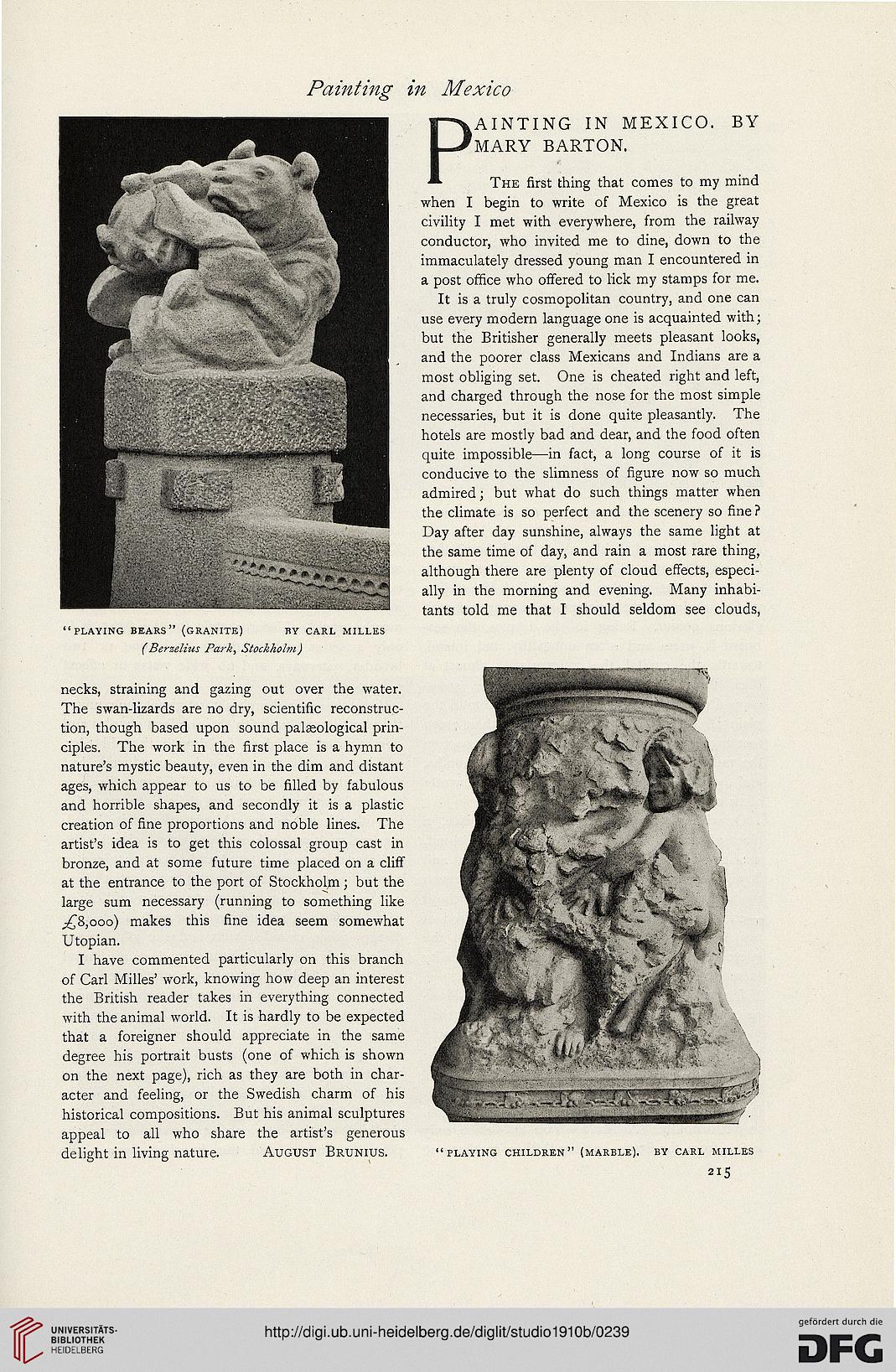 necks, straining and gazing out over the water.
The swan-lizards are no dry, scientific reconstruc-
tion, though based upon sound palseological prin-
ciples. The work in the first place is a hymn to
nature’s mystic beauty, even in the dim and distant
ages, which appear to us to be filled by fabulous
and horrible shapes, and secondly it is a plastic
creation of fine proportions and noble lines. The
artist’s idea is to get this colossal group cast in
bronze, and at some future time placed on a cliff
at the entrance to the port of Stockholm; but the
large sum necessary (running to something like
J~S,ooo) makes this fine idea seem somewhat
Utopian.

I have commented particularly on this branch
of Carl Milles’ work, knowing how deep an interest
the British reader takes in everything connected
with the animal world. It is hardly to be expected
that a foreigner should appreciate in the same
degree his portrait busts (one of which is shown
on the next page), rich as they are both in char-
acter and feeling, or the Swedish charm of his
historical compositions. But his animal sculptures
appeal to all who share the artist’s generous
delight in living nature. August Brunius.

AINTING IN MEXICO. BY
MARY BARTON.

The first thing that comes to my mind
when I begin to write of Mexico is the great
civility I met with everywhere, from the railway
conductor, who invited me to dine, down to the
immaculately dressed young man I encountered in
a post office who offered to lick my stamps for me.

It is a truly cosmopolitan country, and one can
use every modern language one is acquainted with;
but the Britisher generally meets pleasant looks,
and the poorer class Mexicans and Indians are a
most obliging set. One is cheated right and left,
and charged through the nose for the most simple
necessaries, but it is done quite pleasantly. The
hotels are mostly bad and dear, and the food often
quite impossible—in fact, a long course of it is
conducive to the slimness of figure now so much
admired; but what do such things matter when
the climate is so perfect and the scenery so fine ?
Day after day sunshine, always the same light at
the same time of day, and rain a most rare thing,
although there are plenty of cloud effects, especi-
ally in the morning and evening. Many inhabi-
tants told me that I should seldom see clouds,