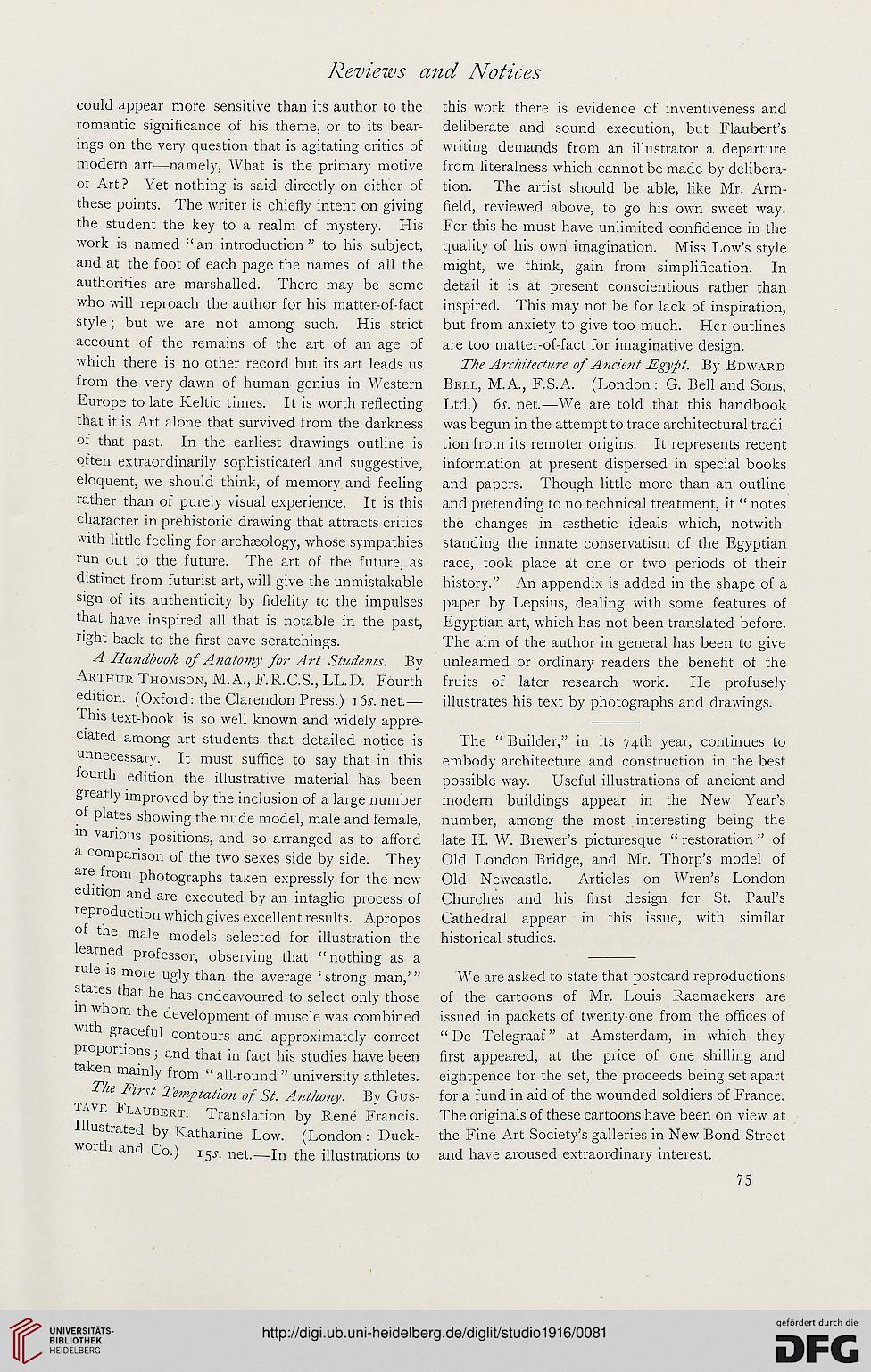 could appear more sensitive than its author to the
romantic significance of his theme, or to its bear-
ings on the very question that is agitating critics of
modern art—namely, What is the primary motive
of Art? Yet nothing is said directly on either of
these points. The writer is chiefly intent on giving
the student the key to a realm of mystery. His
work is named “ an introduction ” to his subject,
and at the foot of each page the names of all the
authorities are marshalled. There may be some
who will reproach the author for his matter-of-fact
style; but we are not among such. His strict
account of the remains of the art of an age of
which there is no other record but its art leads us
from the very dawn of human genius in Western
Europe to late Keltic times. It is worth reflecting
that it is Art alone that survived from the darkness
of that past. In the earliest drawings outline is
often extraordinarily sophisticated and suggestive,
eloquent, we should think, of memory and feeling
rather than of purely visual experience. It is this
character in prehistoric drawing that attracts critics
with little feeling for archaeology, whose sympathies
run out to the future. The art of the future, as
distinct from futurist art, will give the unmistakable
sign of its authenticity by fidelity to the impulses
that have inspired all that is notable in the past,
right back to the first cave scratchings.

A Handbook of Anatomy for Art Students. By
Arthur Thomson, M.A., F.R.C.S., LL.D. Fourth
edition. (Oxford: the Clarendon Press.) i 6^. net.—
1 his text-book is so well known and widely appre-
ciated among art students that detailed notice is
unnecessary. It must suffice to say that in this
fourth edition the illustrative material has been
greatly improved by the inclusion of a large number
of plates showing the nude model, male and female,
m various positions, and so arranged as to afford
a comparison of the two sexes side by side. They
are from photographs taken expressly for the new
edition and are executed by an intaglio process of
reproduction which gives excellent results. Apropos
of the male models selected for illustration the
learned professor, observing that “nothing as a
rule is more ugly than the average ‘strong man,’”
states that he has endeavoured to select only those
in whom the development of muscle was combined
"ith graceful contours and approximately correct
Proportions; and that in fact his studies have been
taken mainly from “all-round” university athletes.

The First Temptation of St. Anthony. By Gus-
TAVE Flaubert. Translation by Rene Francis.
Illustrated by Katharine Low. (London: Duck-
worth and Co.) i jr. net.—In the illustrations to

this work there is evidence of inventiveness and
deliberate and sound execution, but Flaubert’s
writing demands from an illustrator a departure
from literalness which cannot be made by delibera-
tion. The artist should be able, like Mr. Arm-
field, reviewed above, to go his own sweet way.
For this he must have unlimited confidence in the
quality of his own imagination. Miss Low’s style
might, we think, gain from simplification. In
detail it is at present conscientious rather than
inspired. This may not be for lack of inspiration,
but from anxiety to give too much. Her outlines
are too matter-of-fact for imaginative design.

The Architecture of Ancient Egypt. By Edward
Bell, M.A., F.S.A. (London: G. Bell and Sons,
Ltd.) 6j-. net.—We are told that this handbook
was begun in the attempt to trace architectural tradi-
tion from its remoter origins. It represents recent
information at present dispersed in special books
and papers. Though little more than an outline
and pretending to no technical treatment, it “ notes
the changes in aesthetic ideals which, notwith-
standing the innate conservatism of the Egyptian
race, took place at one or two periods of their
history.” An appendix is added in the shape of a
paper by Lepsius, dealing with some features of
Egyptian art, which has not been translated before.
The aim of the author in general has been to give
unlearned or ordinary readers the benefit of the
fruits of later research work. He profusely
illustrates his text by photographs and drawings.

The “ Builder,” in its 74th year, continues to
embody architecture and construction in the best
possible way. Useful illustrations of ancient and
modern buildings appear in the New Year’s
number, among the most interesting being the
late H. W. Brewer’s picturesque “ restoration ” of
Old London Bridge, and Mr. Thorp’s model of
Old Newcastle. Articles on Wren’s London
Churches and his first design for St. Paul’s
Cathedral appear in this issue, with similar
historical studies.

We are asked to state that postcard reproductions
of the cartoons of Mr. Louis Raemaekers are
issued in packets of twenty-one from the offices of
“De Telegraaf” at Amsterdam, in which they
first appeared, at the price of one shilling and
eightpence for the set, the proceeds being set apart
for a fund in aid of the wounded soldiers of France.
The originals of these cartoons have been on view at
the Fine Art Society’s galleries in New Bond Street
and have aroused extraordinary interest.