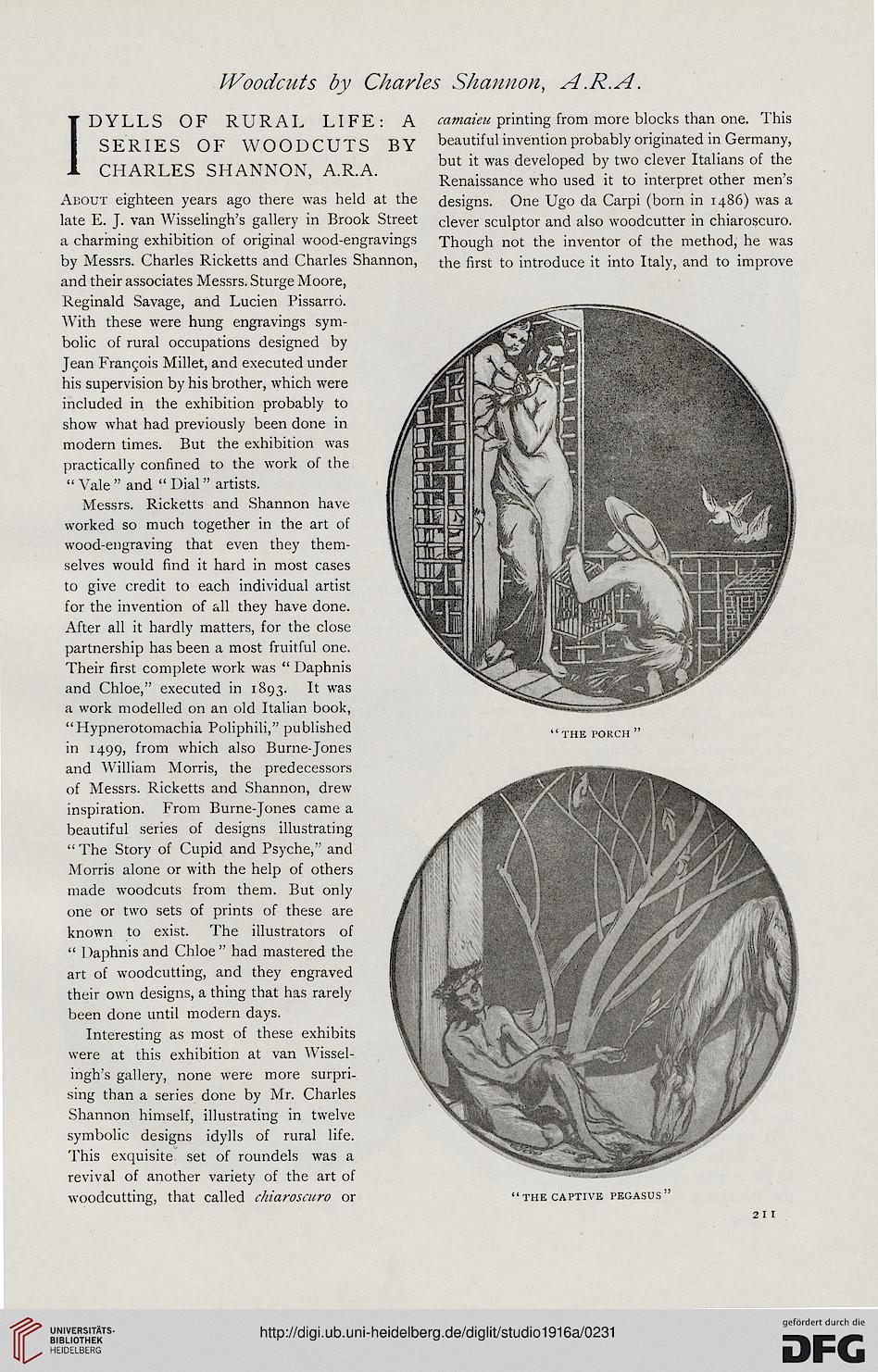 DYLLS OF RURAL LIFE: A camaieu printing from more blocks than one. This
SERIES OF WOODCUTS BY beautiful invention probably originated in Germany,

Renaissance who used it to interpret other men s

About eighteen years ago there was held at the designs. One Ugo da Carpi (born in i486) was a
late E. J. van Wisselingh's gallery in Brook Street clever sculptor and also woodcutter in chiaroscuro,
a charming exhibition of original wood-engravings Though not the inventor of the method, he was
by Messrs. Charles Ricketts and Charles Shannon, the first to introduce it into Italy, and to improve
and their associates Messrs. Sturge Moore,
Reginald Savage, and Lucien Pissarro.
With these were hung engravings sym-
bolic of rural occupations designed by
Jean Francois Millet, and executed under
his supervision by his brother, which were
included in the exhibition probably to
show what had previously been done in
modern times. But the exhibition was
practically confined to the work of the
" Vale " and " Dial " artists.

Messrs. Ricketts and Shannon have
worked so much together in the art of
wood-engraving that even they them-
selves would find it hard in most cases
to give credit to each individual artist
for the invention of all they have done.
After all it hardly matters, for the close
partnership has been a most fruitful one.
Their first complete work was " 1 )aphnis
and Chloe," executed in 1893. It was
a work modelled on an old Italian book,
"Hypnerotomachia Poliphili," published
in 1499, from which also Burne-Jones
and William Morris, the predecessors
of Messrs. Ricketts and Shannon, drew
inspiration. From Burne-Jones came a
beautiful series of designs illustrating
"The Story of Cupid and Psyche," and
Morris alone or with the help of others
made woodcuts from them. But only
one or two sets of prints of these are
known to exist. The illustrators of
" Daphnis and Chloe" had mastered the
art of woodcutting, and they engraved
their own designs, a thing that has rarely
been done until modern days.

Interesting as most of these exhibits
were at this exhibition at van Wissel-
ingh's gallery, none were more surpri-
sing than a series done by Mr. Charles
Shannon himself, illustrating in twelve
symbolic designs idylls of rural life.
This exquisite set of roundels was a
revival of another variety of the art of

woodcutting, that called chiaroscuro or "the captive pegasus"