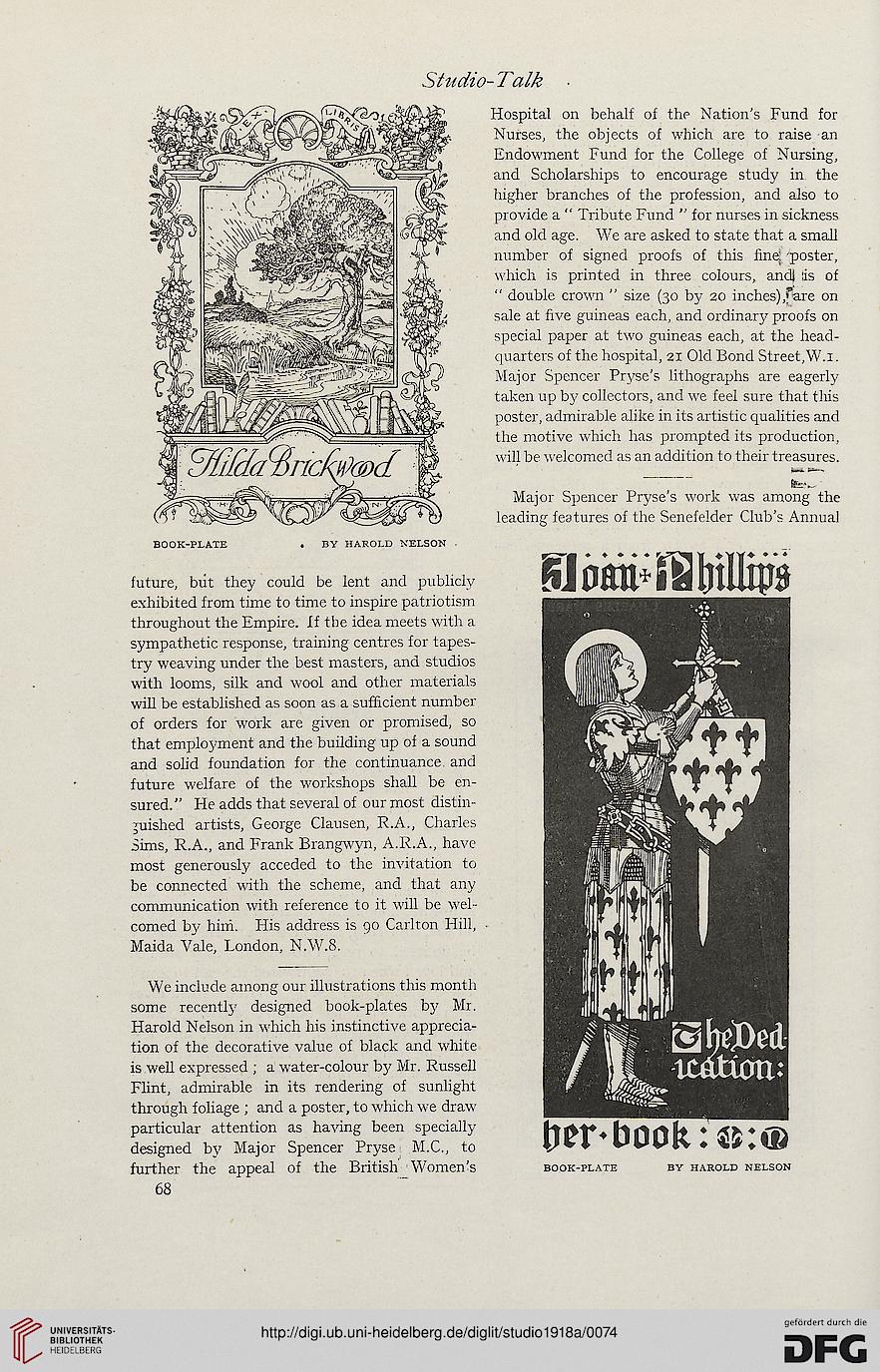 future, but they could be lent and publicly
exhibited from time to time to inspire patriotism
throughout the Empire. If the idea meets with a
sympathetic response, training centres for tapes-
try weaving under the best masters, and studios
with looms, silk and wool and other materials
will be established as soon as a sufficient number
of orders for work are given or promised, so
that employment and the building up of a sound
and solid foundation for the continuance, and
future welfare of the workshops shall be en-
sured." He adds that several of our most distin-
juished artists, George Clausen, R.A., Charles
Sims, R.A., and Frank Brangwyn, A.R.A., have
most generously acceded to the invitation to
be connected with the scheme, and that any
communication with reference to it will be wel-
comed by him. His address is 90 Carlton Hill,
Maida Vale, London, N.W.8.

We include among our illustrations this month
some recently designed book-plates by Mr.
Harold Nelson in which his instinctive apprecia-
tion of the decorative value of black and white
is well expressed ; a water-colour by Mr. Russell
Flint, admirable in its rendering of sunlight
through foliage ; and a poster, to which we draw
particular attention as having been specially
designed by Major Spencer Pryse M.C., to
further the appeal of the British Women's
68

Hospital on behalf of the Nation's Fund for
Nurses, the objects of which are to raise an
Endowment Fund for the College of Nursing,
and Scholarships to encourage study in the
higher branches of the profession, and also to
provide a " Tribute Fund " for nurses in sickness
and old age. We are asked to state that a small
number of signed proofs of this finej/poster,
which is printed in three colours, andj is of
" double crown " size (30 by 20 inches),fare on
sale at five guineas each, and ordinary proofs on
special paper at two guineas each, at the head-
quarters of the hospital, 21 Old Bond Street,W.i.
Major Spencer Pryse's lithographs are eagerly
taken up by collectors, and we feel sure that this
poster, admirable alike in its artistic qualities and
the motive which has prompted its production,
will be welcomed as an addition to their treasures.