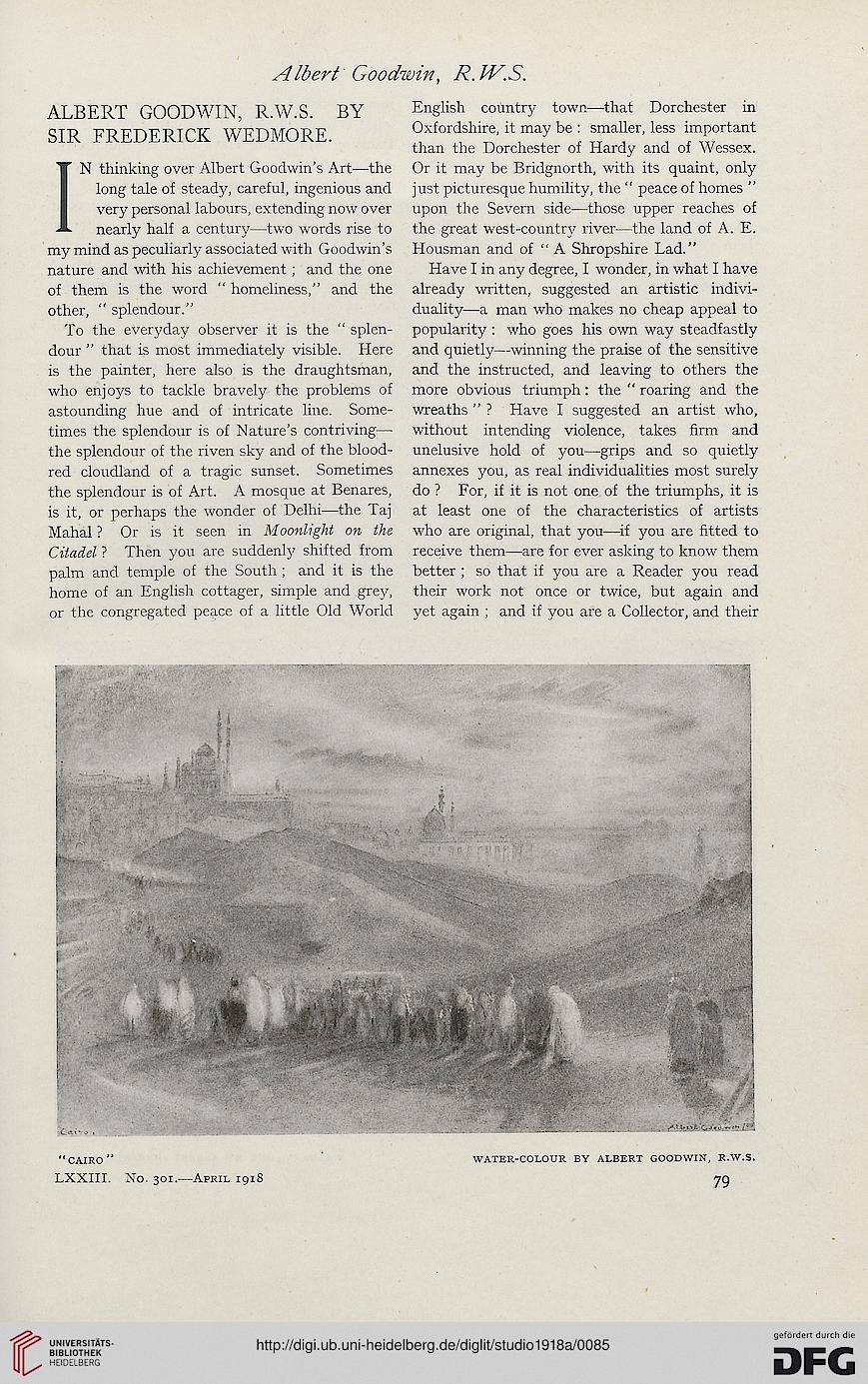 IN thinking over Albert Goodwin's Art—the
long tale of steady, careful, ingenious and
very personal labours, extending now over
nearly half a century—two words rise to
my mind as peculiarly associated with Goodwin's
nature and with his achievement; and the one
of them is the word " homeliness," and the
other, " splendour."

To the everyday observer it is the " splen-
dour " that is most immediately visible. Here
is the painter, here also is the draughtsman,
who enjoys to tackle bravely the problems of
astounding hue and of intricate line. Some-
times the splendour is of Nature's contriving—
the splendour of the riven sky and of the blood-
red cloudland of a tragic sunset. Sometimes
the splendour is of Art. A mosque at Benares,
is it, or perhaps the wonder of Delhi—the Taj
Mahal ? Or is it seen in Moonlight on the
Citadel ? Then you are suddenly shifted from
palm and temple of the South ; and it is the
home of an English cottager, simple and grey,
or the congregated peace of a little Old World

English country town—that Dorchester in
Oxfordshire, it may be : smaller, less important
than the Dorchester of Hardy and of Wessex.
Or it may be Bridgnorth, with its quaint, only
just picturesque humility, the " peace of homes "
upon the Severn side—those upper reaches of
the great west-country river—the land of A. E.
Housman and of " A Shropshire Lad."

Have I in any degree, I wonder, in what I have
already written, suggested an artistic indivi-
duality—a man who makes no cheap appeal to
popularity : who goes his own way steadfastly
and quietly—winning the praise of the sensitive
and the instructed, and leaving to others the
more obvious triumph: the " roaring and the
wreaths " ? Have I suggested an artist who,
without intending violence, takes firm and
unelusive hold of you—grips and so quietly
annexes you, as real individualities most surely
do ? For, if it is not one of the triumphs, it is
at least one of the characteristics of artists
who are original, that you—if you are fitted to
receive them—are for ever asking to know them
better ; so that if you are a Reader you read
their work not once or twice, but again and
yet again ; and if you are a Collector, and their