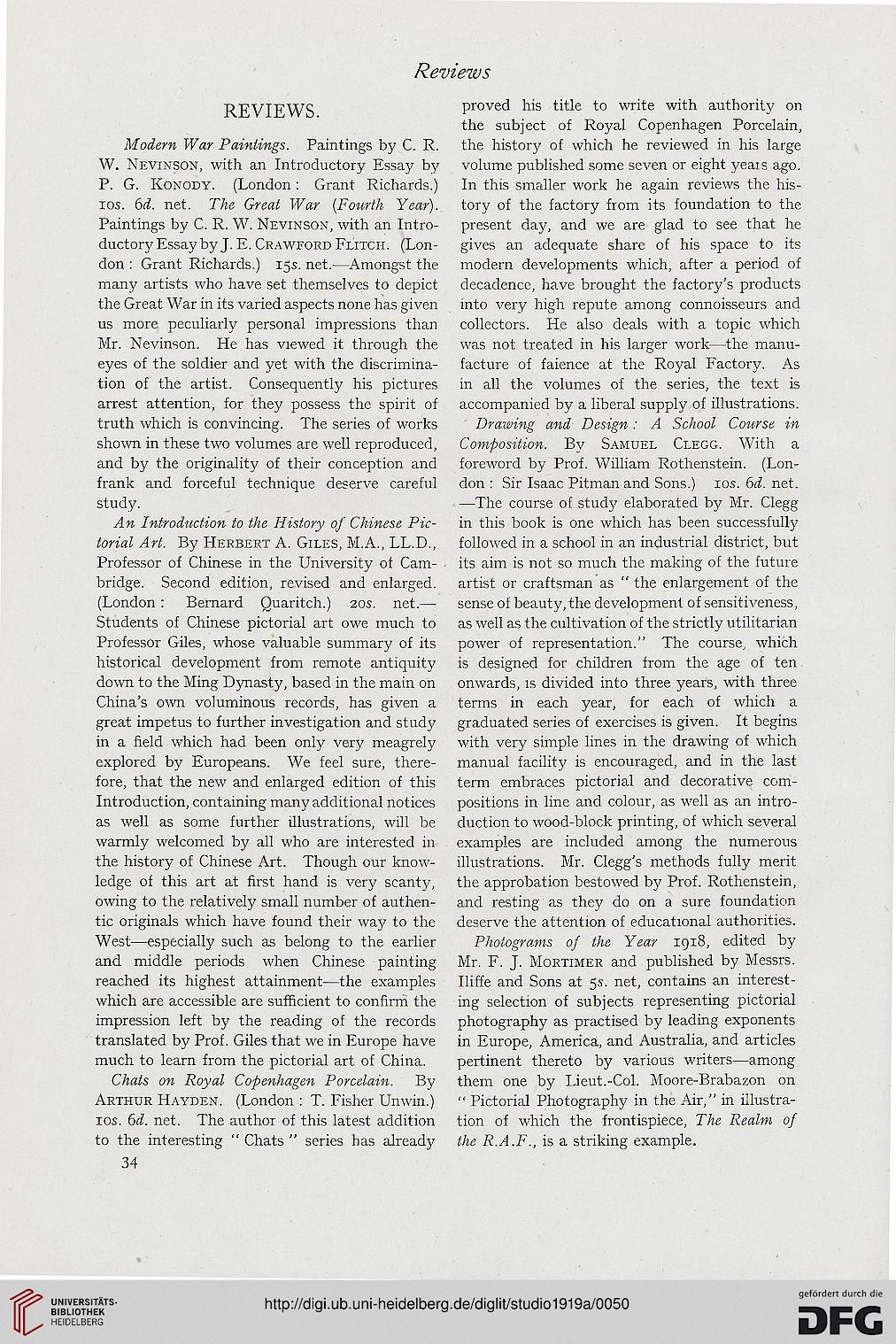 Modem War Paintings. Paintings by C. R.
W. Nevinson, with an Introductory Essay by
P. G. Konody. (London: Grant Richards.)
ios. 6d. net. The Great War (Fourth Year).
Paintings by C. R. W. Nevinson, with an Intro-
ductory Essay by J. E. Crawford Flitch. (Lon-
don : Grant Richards.) 15s. net.—Amongst the
many artists who have set themselves to depict
the Great War in its varied aspects none has given
us more peculiarly personal impressions than
Mr. Nevinson. He has viewed it through the
eyes of the soldier and yet with the discrimina-
tion of the artist. Consequently his pictures
arrest attention, for they possess the spirit of
truth which is convincing. The series of works
shown in these two volumes are well reproduced,
and by the originality of their conception and
frank and forceful technique deserve careful
study.

An Introduction to the History of Chinese Pic-
torial Art. By Herbert A. Giles, M.A., LL.D.,
Professor of Chinese in the University of Cam-
bridge. Second edition, revised and enlarged.
(London : Bernard Quaritch.) 20s. net.—
Students of Chinese pictorial art owe much to
Professor Giles, whose valuable summary of its
historical development from remote antiquity
down to the Ming Dynasty, based in the main on
China's own voluminous records, has given a
great impetus to further investigation and study
in a field which had been only very meagrely
explored by Europeans. We feel sure, there-
fore, that the new and enlarged edition of this
Introduction, containing many additional notices
as well as some further illustrations, will be
warmly welcomed by all who are interested in
the history of Chinese Art. Though our know-
ledge of this art at first hand is very scanty,
owing to the relatively small number of authen-
tic originals which have found their way to the
West—especially such as belong to the earlier
and middle periods when Chinese painting
reached its highest attainment—the examples
which are accessible are sufficient to confirm the
impression left by the reading of the records
translated by Prof. Giles that we in Europe have
much to learn from the pictorial art of China.

proved his title to write with authority on
the subject of Royal Copenhagen Porcelain,
the history of which he reviewed in his large
volume published some seven or eight yeais ago.
In this smaller work he again reviews the his-
tory of the factory from its foundation to the
present day, and we are glad to see that he
gives an adequate share of his space to its
modern developments which, after a period of
decadence, have brought the factory's products
into very high repute among connoisseurs and
collectors. He also deals with a topic which
was not treated in his larger work—the manu-
facture of faience at the Royal Factory. As
in all the volumes of the series, the text is
accompanied by a liberal supply of illustrations.

Drawing and Design: A School Course in
Composition. Bv Samuel Clegg. With a
foreword by Prof. William Rothenstein. (Lon-
don : Sir Isaac Pitman and Sons.) ios. 6d. net.
—The course of study elaborated by Mr. Clegg
in this book is one which has been successfully
followed in a school in an industrial district, but
its aim is not so much the making of the future
artist or craftsman as " the enlargement of the
sense of beauty, the development of sensitiveness,
as well as the cultivation of the strictly utilitarian
power of representation." The course, which
is designed for children from the age of ten
onwards, is divided into three years, with three
terms in each year, for each of which a
graduated series of exercises is given. It begins
with very simple lines in the drawing of which
manual facility is encouraged, and in the last
term embraces pictorial and decorative com-
positions in line and colour, as well as an intro-
duction to wood-block printing, of which several
examples are included among the numerous
illustrations. Mr. Clegg's methods fully merit
the approbation bestowed by Prof. Rothenstein,
and resting as they do on a sure foundation
deserve the attention of educational authorities.

Photograms of the Year 1918, edited by
Mr. F. J. Mortimer and published by Messrs.
Iliffe and Sons at 5s. net, contains an interest-
ing selection of subjects representing pictorial
photography as practised by leading exponents
in Europe, America, and Australia, and articles
pertinent thereto by various writers—among
them one by Lieut.-Col. Moore-Brabazon on
" Pictorial Photography in the Air," in illustra-
tion of which the frontispiece, The Realm of
the R.A.F., is a striking example.