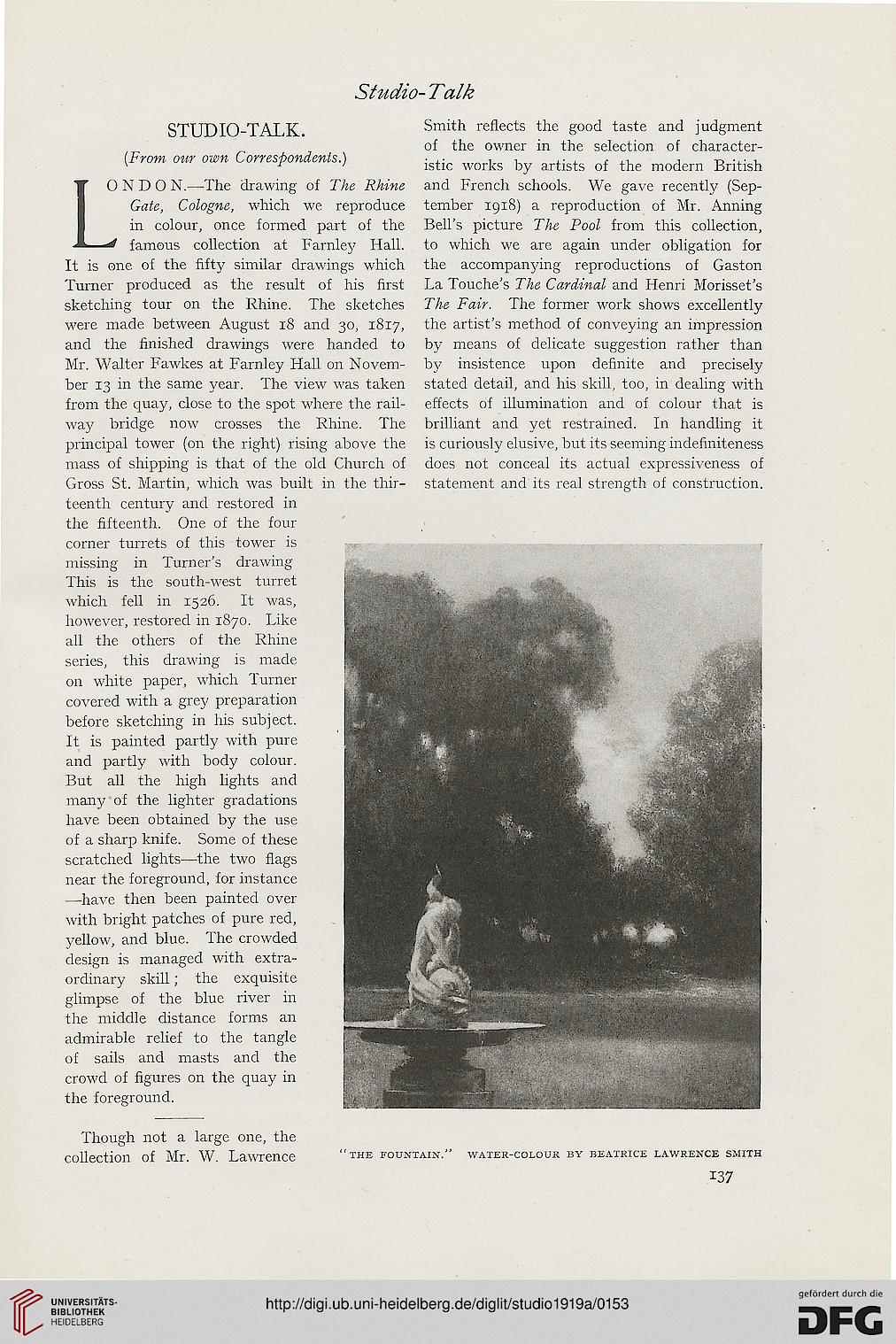 of the owner in the selection of character-
(From our own Correspondents.) ^ foy artists of ^ modfim Britigh

LO N D O N.—The drawing of The Rhine and French schools. We gave recently (Sep-
Gate, Cologne, which we reproduce tember 1918) a reproduction of Mr. Anning
in colour, once formed part of the Bell's picture The Pool from this collection,
' famous collection at Farnley Hall, to which we are again under obligation for
It is one of the fifty similar drawings which the accompanying reproductions of Gaston
Turner produced as the result of his first La Touche's The Cardinal and Henri Morisset's
sketching tour on the Rhine. The sketches The Fair. The former work shows excellently
were made between August 18 and 30, 1817, the artist's method of conveying an impression
and the finished drawings were handed to by means of delicate suggestion rather than
Mr. Walter Fawkes at Farnley Hall on Novem- by insistence upon definite and precisely
ber 13 in the same year. The view was taken stated detail, and his skill, too, in dealing with
from the quay, close to the spot where the rail- effects of illumination and of colour that is
way bridge now crosses the Rhine. The brilliant and yet restrained. In handling it
principal tower (on the right) rising above the is curiously elusive, but its seeming indefmiteness
mass of shipping is that of the old Church of does not conceal its actual expressiveness of
Gross St. Martin, which was built in the thir- statement and its real strength of construction,
teenth century and restored in
the fifteenth. One of the four
corner turrets of this tower is
missing in Turner's drawing
This is the south-west turret
which fell in 1526. It was,
however, restored in 1870. Like
all the others of the Rhine
series, this drawing is made
on white paper, which Turner
covered with a grey preparation
before sketching in his subject.
It is painted partly with pure
and partly with body colour.
But all the high lights and
many of the lighter gradations
have been obtained by the use
of a sharp knife. Some of these
scratched lights—the two flags
near the foreground, for instance
—have then been painted over
with bright patches of pure red,
yellow, and blue. The crowded
design is managed with extra-
ordinary skill; the exquisite
glimpse of the blue river in
the middle distance forms an
admirable relief to the tangle
of sails and masts and the
crowd of figures on the quay in
the foreground.

Though not a large one, the
collection of Mr. W. Lawrence "the fountain." water-colour by Beatrice lawrence smith