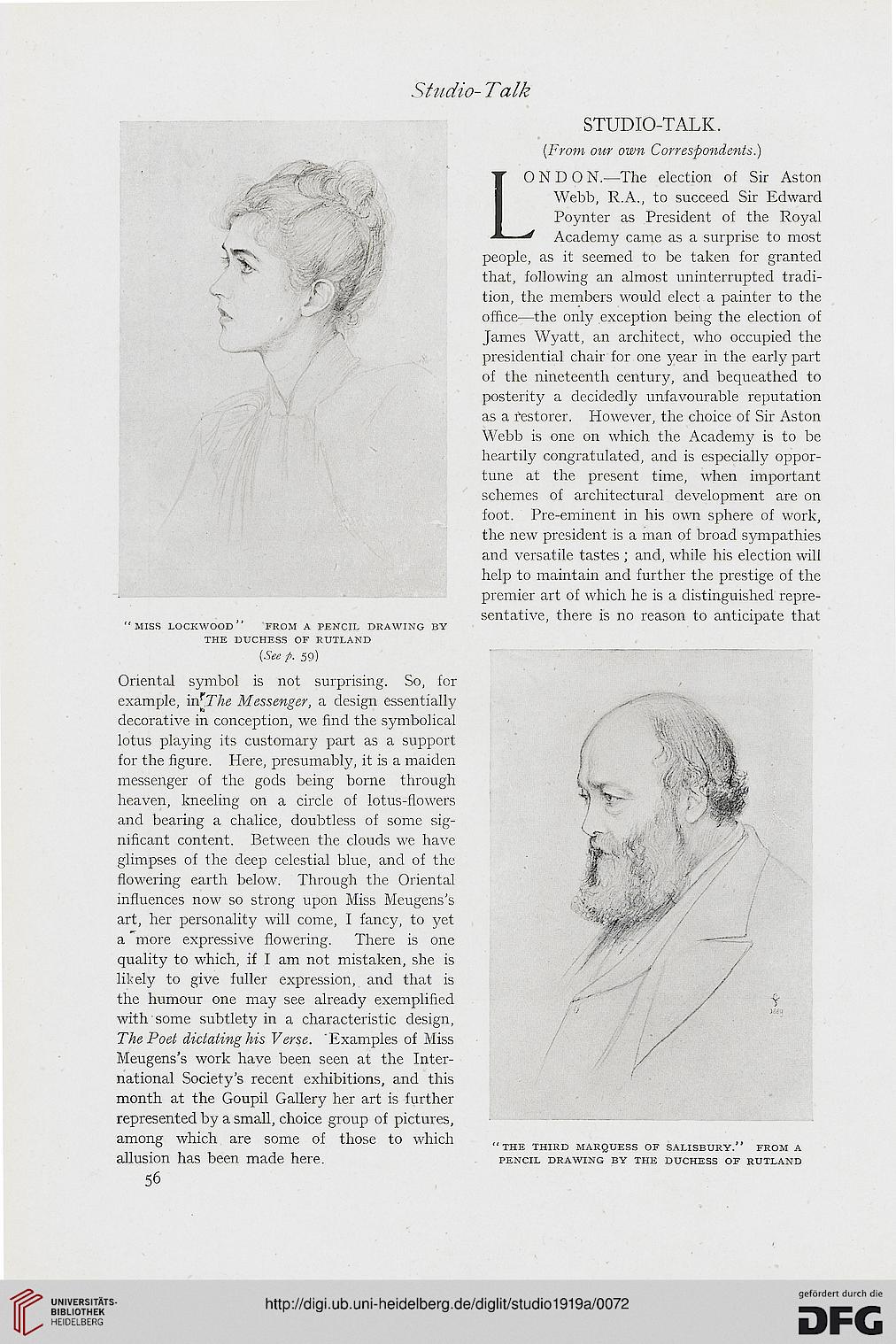 LONDON.—The election of Sir Aston
Webb, R.A., to succeed Sir Edward
Poynter as President of the Royal
' Academy came as a surprise to most
people, as it seemed to be taken for granted
that, following an almost uninterrupted tradi-
tion, the members would elect a painter to the
office—the only exception being the election of
James Wyatt, an architect, who occupied the
presidential chair for one year in the early part
of the nineteenth century, and bequeathed to
posterity a decidedly unfavourable reputation
as a restorer. However, the choice of Sir Aston
Webb is one on which the Academy is to be
heartily congratulated, and is especially oppor-
tune at the present time, when important
schemes of architectural development are on
foot. Pre-eminent in his own sphere of work,
the new president is a man of broad sympathies
and versatile tastes ; and, while his election will
help to maintain and further the prestige of the
premier art of which he is a distinguished repre-
sentative, there is no reason to anticipate that

" miss lockwood from a pencil drawing by

the duchess of rutland

Oriental symbol is not surprising. So, for
example, irvThe Messenger, a design essentially
decorative in conception, we find the symbolical
lotus playing its customary part as a support
for the figure. Here, presumably, it is a maiden
messenger of the gods being borne through
heaven, kneeling on a circle of lotus-flowers
and bearing a chalice, doubtless of some sig-
nificant content. Between the clouds we have ||
glimpses of the deep celestial blue, and of the
flowering earth below. Through the Oriental f
influences now so strong upon Miss Meugens's

art, her personality will come, I fancy, to yet '
a more expressive flowering. There is one
quality to which, if I am not mistaken, she is
likely to give fuller expression, and that is
the humour one may see already exemplified '
with some subtlety in a characteristic design,
The Poet dictating his Verse. Examples of Miss
Meugens's work have been seen at the Inter-
national Society's recent exhibitions, and this
month at the Goupil Gallery her art is further
represented by a small, choice group of pictures,
among which are some of those to which

.fa "the third marquess of salisbury. from a

allusion has been made here. pencil drawing by the duchess of Rutland