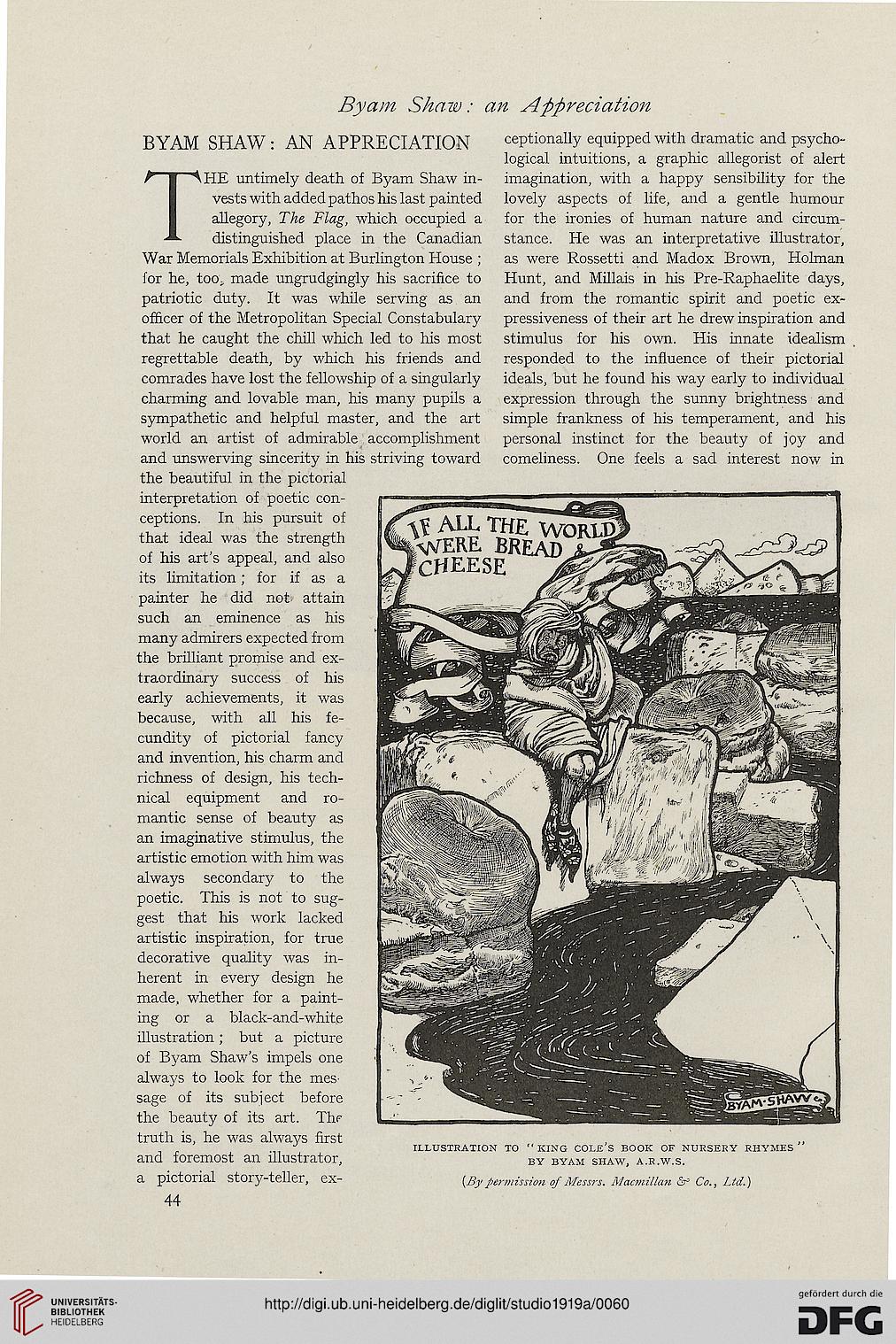 Information about OCR text
By am Shaw: ait Appreciation

BYAM SHAW: AN APPRECIATION ceptionally equipped with dramatic and psycho-

THE untimely death of Byam Shaw in- imagination, with a happy sensibility for the
vests with added pathos his last painted lovely aspects of life, and a gentle humour
allegory, The Flag, which occupied a for the ironies of human nature and circum-
distinguished place in the Canadian stance. He was an interpretative illustrator,
War Memorials Exhibition at Burlington House ; as were Rossetti and Madox Brown, Holman
for he, too, made ungrudgingly his sacrifice to Hunt, and Millais in his Pre-Raphaelite days,
patriotic duty. It was while serving as an and from the romantic spirit and poetic ex-
officer of the Metropolitan Special Constabulary pressiveness of their art he drew inspiration and
that he caught the chill which led to his most stimulus for his own. His innate idealism
regrettable death, by which his friends and responded to the influence of their pictorial
comrades have lost the fellowship of a singularly ideals, but he found his way early to individual
charming and lovable man, his many pupils a expression through the sunny brightness and
sympathetic and helpful master, and the art simple frankness of his temperament, and his
world an artist of admirable accomplishment personal instinct for the beauty of joy and
and unswerving sincerity in his striving toward comeliness. One feels a sad interest now in
the beautiful in the pictorial
interpretation of poetic con-
ceptions. In his pursuit of
that ideal was the strength
of his art's appeal, and also
its limitation; for if as a
painter he did not attain
such an eminence as his
many admirers expected from
the brilliant promise and ex-
traordinary success of his
early achievements, it was
because, with all his fe-
cundity of pictorial fancy
and invention, his charm and
richness of design, his tech-
nical equipment and ro-
mantic sense of beauty as
an imaginative stimulus, the
artistic emotion with him was
always secondary to the
poetic. This is not to sug-
gest that his work lacked
artistic inspiration, for true
decorative quality was in-
herent in every design he
made, whether for a paint-
ing or a black-and-white
illustration; but a picture
of Byam Shaw's impels one
always to look for the mes-
sage of its subject before
the beauty of its art. The
truth is, he was always first

and foremost an illustrator, by byam shaw, a.r.w.s.