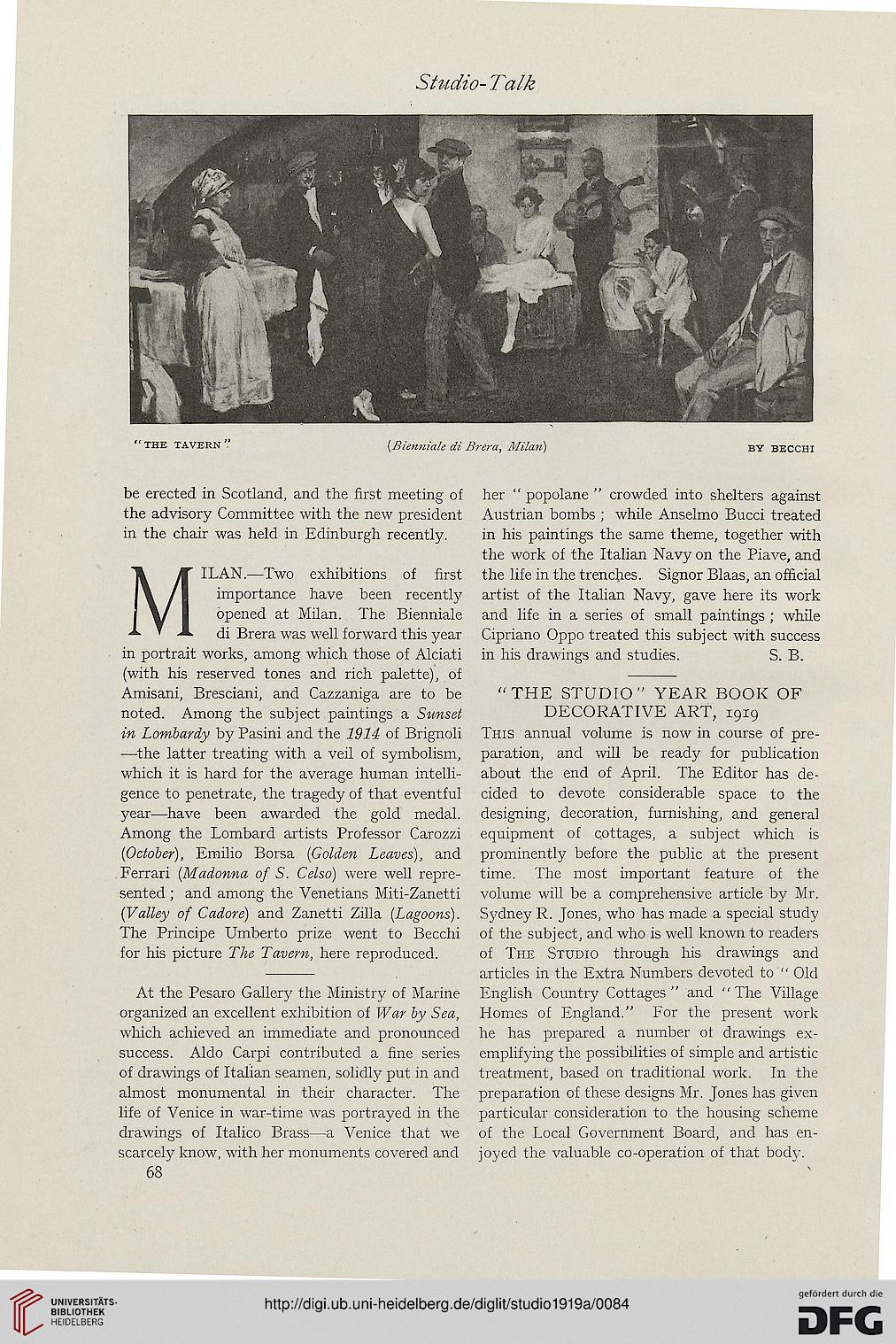 be erected in Scotland, and the first meeting of
the advisory Committee with the new president
in the chair was held in Edinburgh recently.

MILAN.—Two exhibitions of first
importance have been recently
opened at Milan. The Bienniale
di Brera was well forward this year
in portrait works, among which those of Alciati
(with his reserved tones and rich palette), of
Amisani, Bresciani, and Cazzaniga are to be
noted. Among the subject paintings a Sunset
in Lombardy by Pasini and the 1914 of Brignoli
—the latter treating with a veil of symbolism,
which it is hard for the average human intelli-
gence to penetrate, the tragedy of that eventful
year—have been awarded the gold medal.
Among the Lombard artists Professor Carozzi
[October), Emilio Borsa [Golden Leaves), and
Ferrari [Madonna of S. Celso) were well repre-
sented ; and among the Venetians Miti-Zanetti
[Valley of Cadore) and Zanetti Zilla [Lagoons).
The Principe Umberto prize went to Becchi
for his picture The Tavern, here reproduced.

At the Pesaro Gallery the Ministry of Marine
organized an excellent exhibition of War by Sea,
which achieved an immediate and pronounced
success. Aldo Carpi contributed a fine series
of drawings of Italian seamen, solidly put in and
almost monumental in their character. The
life of Venice in war-time was portrayed in the
drawings of Italico Brass—a Venice that we
scarcely know, with her monuments covered and
68

her " popolane " crowded into shelters against
Austrian bombs ; while Anselmo Bucci treated
in his paintings the same theme, together with
the work of the Italian Navy on the Piave, and
the life in the trenches. Signor Blaas, an official
artist of the Italian Navy, gave here its work
and life in a series of small paintings ; while
Cipriano Oppo treated this subject with success
in his drawings and studies. S. B.

"THE STUDIO" YEAR BOOK OF
DECORATIVE ART, 1919
This annual volume is now in course of pre-
paration, and will be ready for publication
about the end of April. The Editor has de-
cided to devote considerable space to the
designing, decoration, furnishing, and general
equipment of cottages, a subject which is
prominently before the public at the present
time. The most important feature of the
volume will be a comprehensive article by Mr.
Sydney R. Jones, who has made a special study
of the subject, and who is well known to readers
of The Studio through his drawings and
articles in the Extra Numbers devoted to " Old
English Country Cottages" and "The Village
Homes of England." For the present work
he has prepared a number of drawings ex-
emplifying the possibilities of simple and artistic
treatment, based on traditional work. In the
preparation of these designs Mr. Jones has given
particular consideration to the housing scheme
of the Local Government Board, and has en-
joyed the valuable co-operation of that body.