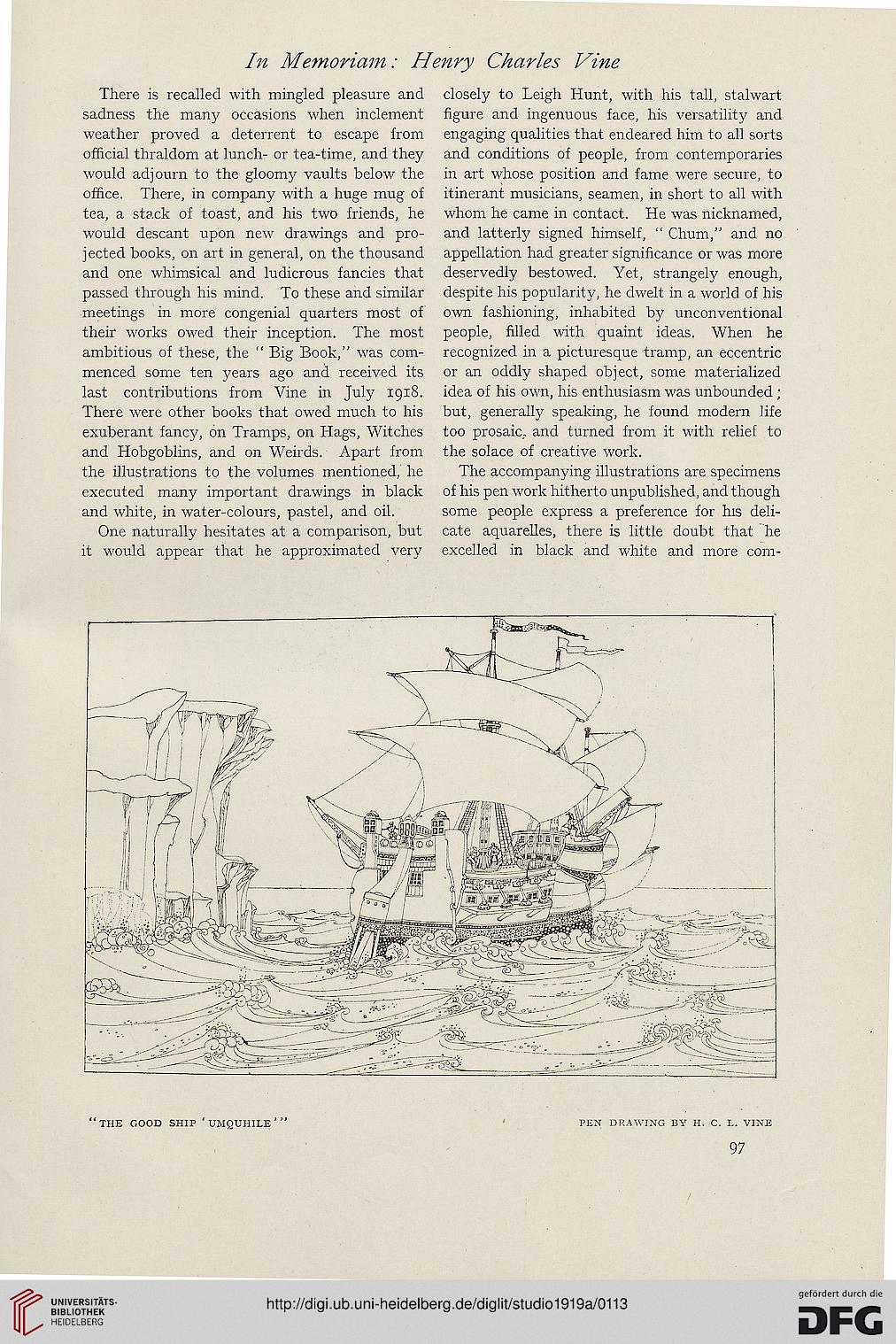 There is recalled with mingled pleasure and
sadness the many occasions when inclement
weather proved a deterrent to escape from,
official thraldom at lunch- or tea-time, and they
would adjourn to the gloomy vaults below the
office. There, in company with a huge mug of
tea, a stack of toast, and his two friends, he
would descant upon new drawings and pro-
jected books, on art in general, on the thousand
and one whimsical and ludicrous fancies that
passed through his mind. To these and similar
meetings in more congenial quarters most of
their works owed their inception. The most
ambitious of these, the " Big Book," was com-
menced some ten years ago and received its
last contributions from Vine in July 1918.
There were other books that owed much to his
exuberant fancy, on Tramps, on Hags, Witches
and Hobgoblins, and on Weirds. Apart from
the illustrations to the volumes mentioned, he
executed many important drawings in black
and white, in water-colours, pastel, and oil.

One naturally hesitates at a comparison, but
it would appear that he approximated very

closely to Leigh Hunt, with his tall, stalwart
figure and ingenuous face, his versatility and
engaging qualities that endeared him to all sorts
and conditions of people, from contemporaries
in art whose position and fame were secure, to
itinerant musicians, seamen, in short to all with
whom he came in contact. He was nicknamed,
and latterly signed himself, " Chum," and no
appellation had greater significance or was more
deservedly bestowed. Yet, strangely enough,
despite his popularity, he dwelt in a world of his
own fashioning, inhabited by unconventional
people, filled with quaint ideas. When he
recognized in a picturesque tramp, an eccentric
or an oddly shaped object, some materialized
idea of his own, his enthusiasm was unbounded ;
but, generally speaking, he found modern life
too prosaic, and turned from it with relief to
the solace of creative work.

The accompanying illustrations are specimens
of his pen work hitherto unpublished, and though
some people express a preference for his deli-
cate aquarelles, there is little doubt that he
excelled in black and white and more com-