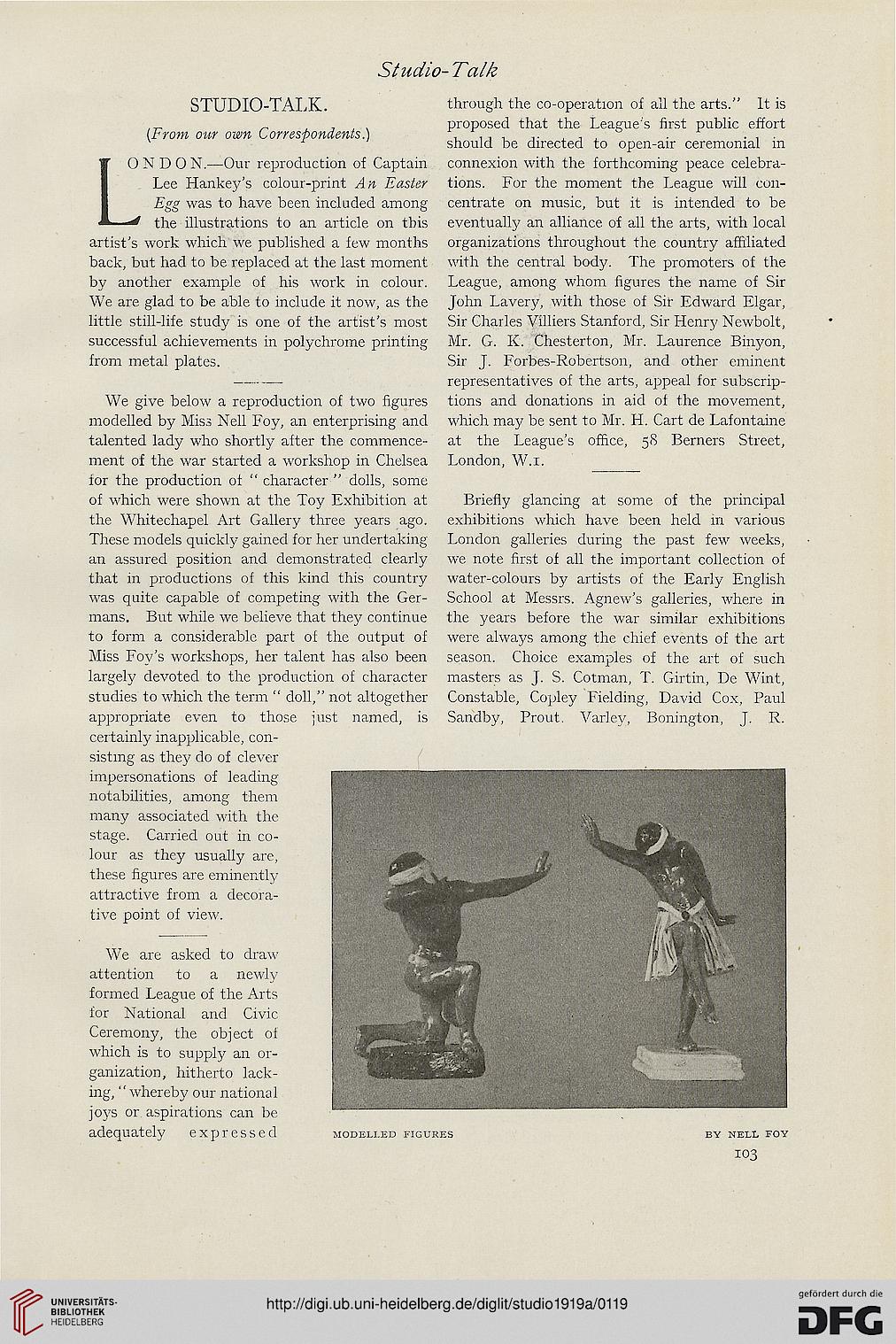 STUDIO-TALK. through the co-operation of all the arts." It is

v r should be directed to open-air ceremonial m

Lee Hankey's colour-print An Easter tions. For the moment the League will con-

Egg was to have been included among centrate on music, but it is intended to be

' the illustrations to an article on this eventually an alliance of all the arts, with local

back, but had to be replaced at the last moment with the central body. The promoters of the

by another example of his work in colour. League, among whom figures the name of Sir

We are glad to be able to include it now, as the John Lavery, with those of Sir Edward Elgar,

little still-life study is one of the artist's most Sir Charles Villiers Stanford, Sir Henry Newbolt,

from metal plates. Sir J. Forbes-Robertson, and other eminent

------- representatives of the arts, appeal for subscrip-

We give below a reproduction of two figures tions and donations in aid of the movement,

modelled by Miss Nell Foy, an enterprising and which may be sent to Mr. H. Cart de Lafontaine

talented lady who shortly after the commence- at the League's office, 58 Berners Street,

ment of the war started a workshop in Chelsea London, W.i.
for the production of " character " dolls, some

the Whitechapel Art Gallery three years ago. exhibitions which have been held in various

These models quickly gained for her undertaking London galleries during the past few weeks,

was quite capable of competing with the Ger- School at Messrs. Agnew's galleries, where in

mans. But while we believe that they continue the years before the war similar exhibitions

Miss Foy's workshops, her talent has also been season. Choice examples of the art of such

appropriate even to those just named, is Sandby, Prout. VarJey, Bonington, J. R.
cer tainly inapplicable, con-
sisting as they do of clever
impersonations of leading
notabilities, among them
many associated with the
stage. Carried out in co-
lour as they usually arc,
these figures are eminently
attractive from a decora-
tive point of view.

We are asked to draw-
attention to a newly
formed League of the Arts
for National and Civic
Ceremony, the object of
which is to supply an or-
ganization, hitherto lack-
ing, "whereby our national
joys or aspirations can be
adequately expressed modelled figures by nell foy