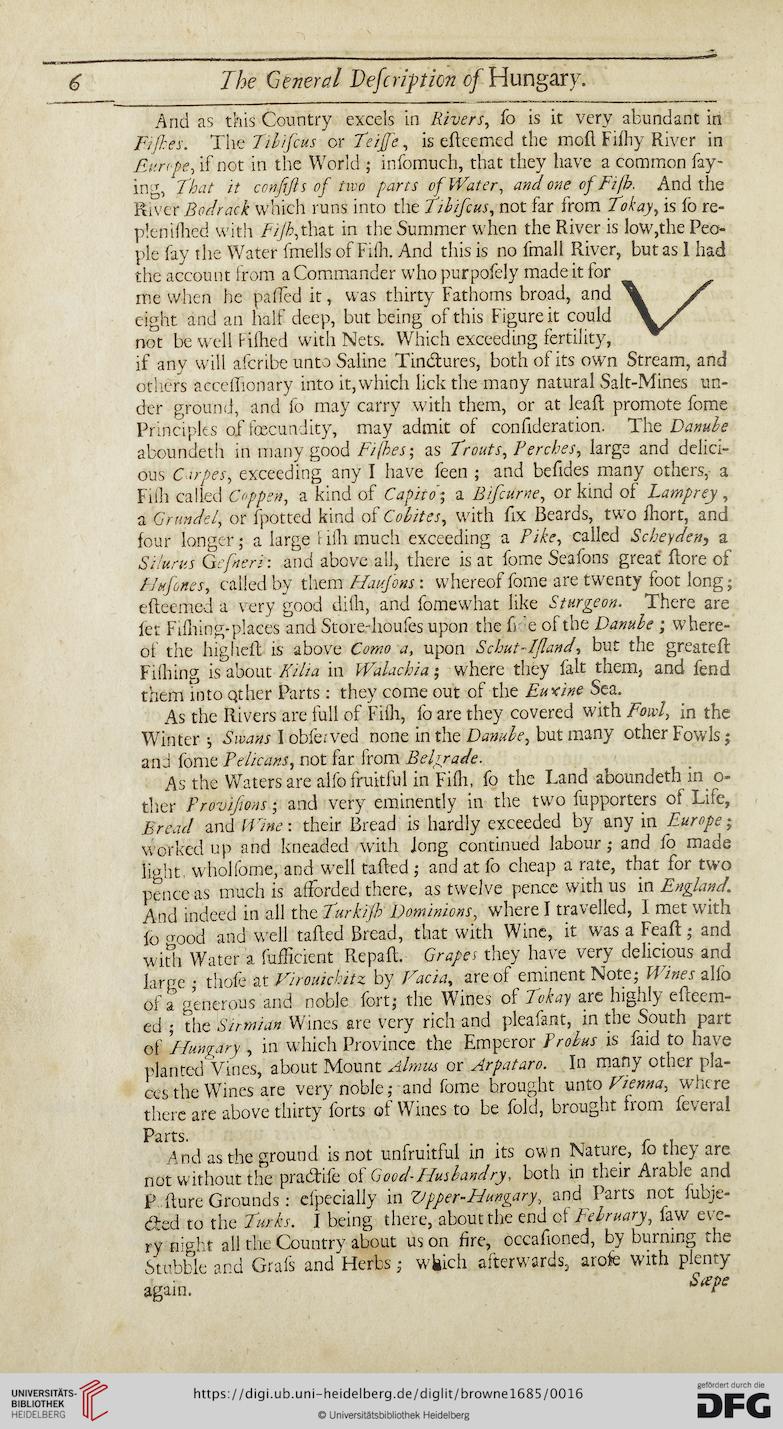 The General Defcription os Hungary.
And as this Country excels in Riverr, so is it very abundant in
Fijkes. The Tib ifcus or 7sz/^, is esleemed the mosl Fisty River in
Europe, if not in the World ; insomuch, that they have a common say-
ing, That it conjijls of two parts of Water, and one os Fifb. And the
River Bodrack which runs into the Tibifcus, not far from Tokay, is so re-
plenisted with Az/^that in the Summer when the River is low,the Peo-
ple say the Water smells of Fist. And this is no small River, but as 1 had
the account from a Commander who purposely made it for
me when he pasfed it, was thirty Fathoms broad, and
eight and an half deep, but being of this Figure it could
not be well lifted with Nets. Which exceeding fertility,
if any will ascribe unto Saline Tinctures, both of its own Stream, and
others accessionary into it, which lick the many natural Salt-Mines un-
der ground, and so may carry with them, or at leasl promote some
Principles of scecundity, may admit of consideration. The Danube
aboundeth in many good Fifbes*, as Trouts, Perches, large and delici-
ous Cdrpes, exceeding any I have seen ; and besides many others,- a
Fist called Coppen, a kind of Capito*, a Bifcurne, or kind of Lamprey,
a Grundel, or spotted kind of Cobites, with six Beards, two stort, and
four longer; a large list much exceeding a Pike, called Scheyden^ a
Silurus Ge fieri: and above all, there is at some Seasons great slore of
LJbtfones, called by them HauJ'ons: whereos some are twenty foot long;
esleemed a very good dist, and somewhat like Sturgeon. There are
set Fisting-places and Store-houses upon the si e os the Danube; where-
of the highest is above Como a, upon Schut-Efland, but the greatesl
Fisting is about Kilia in Walachia*, where they sait them, and send
them into Qther Parts : they come out of the Euxine Sea.
As the Rivers are full of Fift, so are they covered with Fowl, in the
Winter •, Swans I observed none in the Danube, but many other Fowls ;
an J some Pelicans, not far from Belgrade.
As the Waters are also fruitful in Fift, so the Land aboundeth in o-
ther Provijions; and very eminently in the two supporters of Life,
Eread and Wine: their Bread is hardly exceeded by any in Europe*,
worked up and kneaded with Jong continued labour; and so made
light, wholsome, and well tailed; and at so cheap a rate, that for two
pence as much is asforded there, as twelve pence with us in England.
And indeed in all the T.urkifo Dominions, where I travelled, I met with
so good and well tailed Bread, that with Wine, it was a Feail; and
with Water a sufFicient Re pail. Grapes they have very delicious and
large ; those at Firouichitz by Facia, are of eminent Note; Wines a\so
of a generous and noble sort; the Wines of Tokay are highly esleem-
ed ; the Sirmian Wines are very rich and pleasant, in the South part
of Hungary , in which Province the Emperor Probus is said to have
planted Vines, about Mount Almus or Arpataro. In many other pla-
ces the Wines are very noble; and some brought unto Vienna, where
there are above thirty sorts of Wines to be sold, brought from several
Parts.
And as the ground is not unfruitful in its own Nature, so they are
not without the pradtife of Good'Husbandry, both in their Arable and
P .ilure Grounds : specially in Zipper-Hungary, and Parts not subje-
fed to the Turks. I being there, about the end of February, saw eve-
ry night all the Country about us on sire, occasioned, by burning the
Stubble and Grass and Herbs; which afterwards, arofe with plenty
again. $aPe