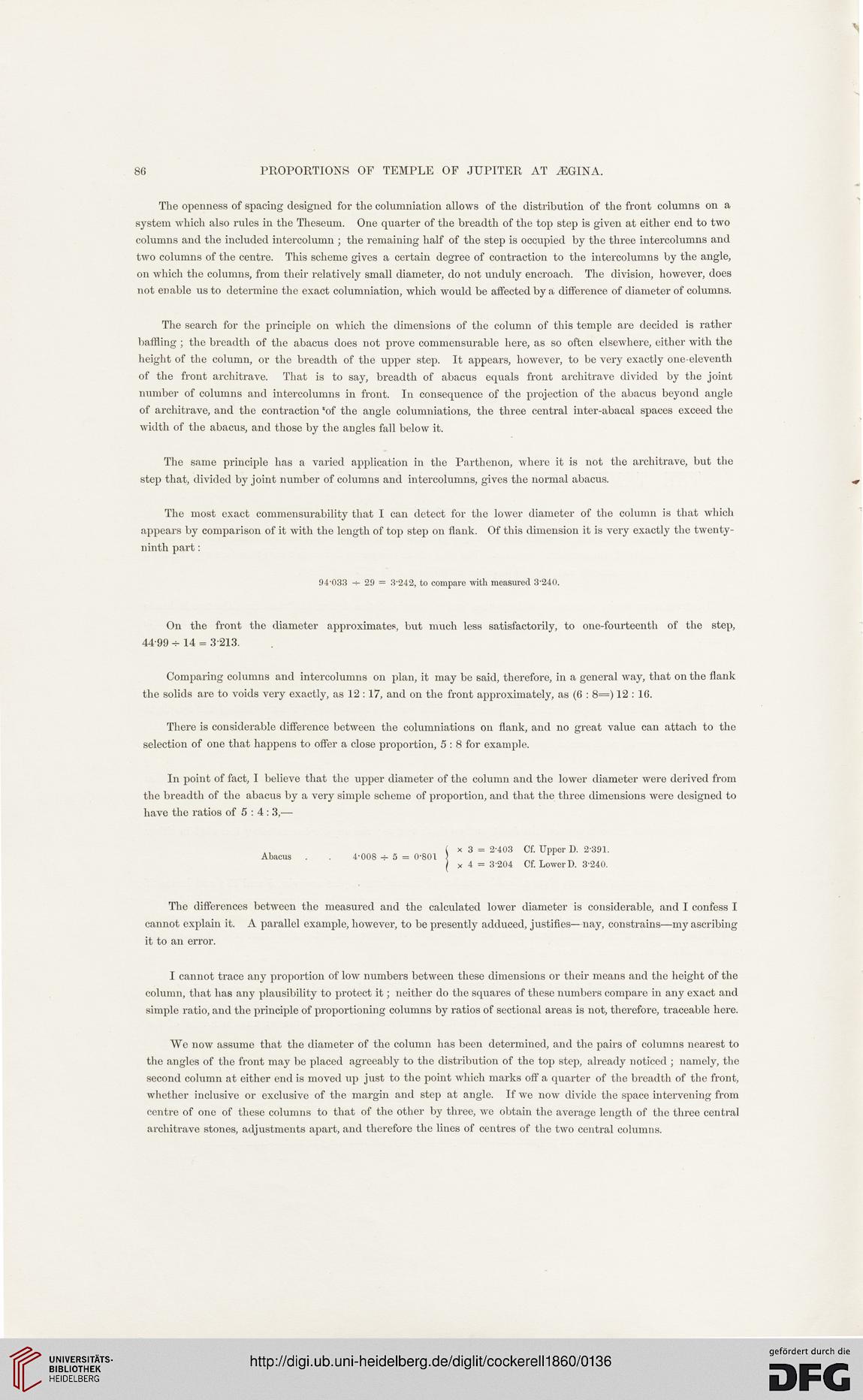 Information about OCR text
86 PROPORTIONS OF TEMPLE OF JUPITER AT iEGINA.

The openness of spacing designed for the columniation allows of the distribution of the front columns on a
system which also rules in the Theseum. One quarter of the breadth of the top step is given at either end to two
columns and the included intercolumn ; the remaining half of the step is occupied by the three intercolumns and
two columns of the centre. This scheme gives a certain degree of contraction to the intercolumns by the angle,
on which the columns, from their relatively small diameter, do not unduly encroach. The division, however, does
not enable us to determine the exact columniation, which would be affected by a difference of diameter of columns.

The search for the principle on which the dimensions of the column of this temple are decided is rather
baffling ; the breadth of the abacus does not prove commensurable here, as so often elsewhere, either with the
height of the column, or the breadth of the upper step. It appears, however, to be very exactly one-eleventh
of the front architrave. That is to say, breadth of abacus equals front architrave divided by the joint
number of columns and intercolumns in front. In consequence of the projection of the abacus beyond angle
of architrave, and the contraction 'of the angle columniations, the three central inter-abacal spaces exceed the
width of the abacus, and those by the angles fall below it.

The same principle has a varied application in the Parthenon, where it is not the architrave, but the
step that, divided by joint number of columns and intercolumns, gives the normal abacus.

The most exact commensurability that I can detect for the lower diameter of the column is that which
appears by comparison of it with the length of top step on flank. Of this dimension it is very exactly the twenty-
ninth part:

There is considerable difference between the columniations on flank, and no great value can attach to the
selection of one that happens to offer a close proportion, 5 : 8 for example.

In point of fact, I believe that the upper diameter of the column and the lower diameter were derived from
the breadth of the abacus by a very simple scheme of proportion, and that the three dimensions were designed to
have the ratios of 5 : 4 : 3,—

The differences between the measured and the calculated lower diameter is considerable, and I confess I
cannot explain it. A parallel example, however, to be presently adduced, justifies—nay, constrains—my ascribing
it to an error.

I cannot trace any proportion of low numbers between these dimensions or their means and the height of the
column, that has any plausibility to protect it; neither do the squares of these numbers compare in any exact and
simple ratio, and the principle of proportioning columns by ratios of sectional areas is not, therefore, traceable here.

We now assume that the diameter of the column has been determined, and the pairs of columns nearest to
the angles of the front may be placed agreeably to the distribution of the top step, already noticed ; namely, the
second column at either end is moved up just to the point which marks off a quarter of the breadth of the front,
whether inclusive or exclusive of the margin and step at angle. If we now divide the space intervening from
centre of one of these columns to that of the other by three, we obtain the average length of the three central
architrave stones, adjustments apart, and therefore the lines of centres of the two central columns.