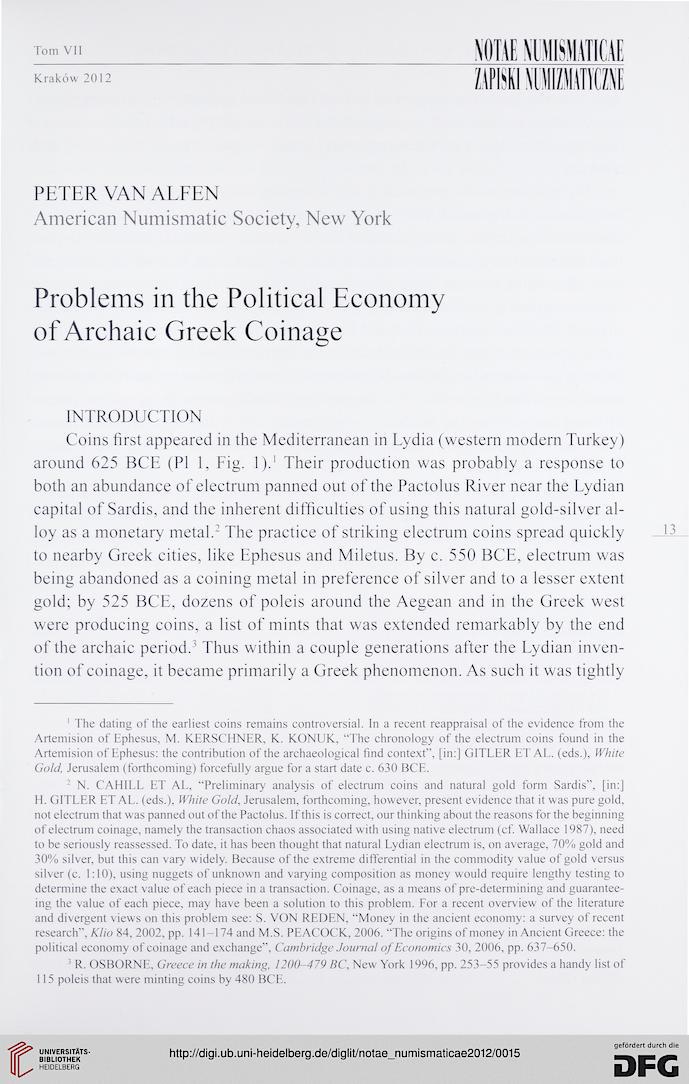 Problems in the Political Economy
of Archaic Greek Coinage

INTRODUCTION
Coins first appeared in the Mediterranean in Lydia (western modern Turkey)
around 625 BCE (PI 1, Fig. I).1 Their production was probably a response to
both an abundance of electrum panned out of the Pactolus River near the Lydian
Capital of Sardis, and the inherent difficulties of using this natural gold-silver al-
loy as a monetary metal.2 The practice of striking electrum coins spread ąuickly
to nearby Greek cities, like Ephesus and Miletus. By c. 550 BCE, electrum was
being abandoned as a coining metal in preference of silver and to a lesser extent
gold; by 525 BCE, dozens of poleis around the Aegean and in the Greek west
were producing coins, a list of mints that was extended remarkably by the end
of the archaic period.3 Thus within a couple generations after the Lydian inven-
tion of coinage, it became primarily a Greek phenomenon. As such it was tightly

1 The dating of the earliest coins remains controversial. In a recent reappraisal of the evidence from the
Artemision of Ephesus, M. KERSCHNER, K. KONUK, “The chronology of the electrum coins found in the
Artemision of Ephesus: the contribution of the archaeological find context”, [in:] GITLER ET AL. (eds.), White
Gold, Jerusalem (forthcoming) forcefully argue for a start datę c. 630 BCE.
; N. CAHILL ET AL, “Preliminary analysis of electrum coins and natural gold form Sardis”, [in:]
H. GITLER ET AL. (eds.), White Gold, Jerusalem, forthcoming, however, present evidence that it was pure gold,
not electrum that was panned out of the Pactolus. If this is correct, our thinking about the reasons for the beginning
of electrum coinage, namely the transaction chaos associated with using native electrum (cf. Wallace 1987), need
to be seriously reassessed. To datę, it has been thought that natural Lydian electrum is, on average, 70% gold and
30% silver, but this can vary widely. Because of the extreme differential in the commodity value of gold versus
silver (c. 1:10), using nuggets of unknown and varying composition as money would reąuire lengthy testing to
determine the exact value of each piece in a transaction. Coinage, as a means of pre-determining and guarantee-
ing the value of each piece, may have been a solution to this problem. For a recent overview of the literaturę
and divergent views on this problem see: S. VON REDEN, “Money in the ancient economy: a survey of recent
research”, Klio 84, 2002, pp. 141-174 and M.S. PEACOCK, 2006. “The origins of money in Ancient Greece: the
political economy of coinage and exchange”, Cambridge Journal of Economics 30, 2006, pp. 637-650.
3 R. OSBORNE, Greece in the making, 1200-479 BC, New York 1996, pp. 253-55 provides a handy list of
115 poleis that were minting coins by 480 BCE.