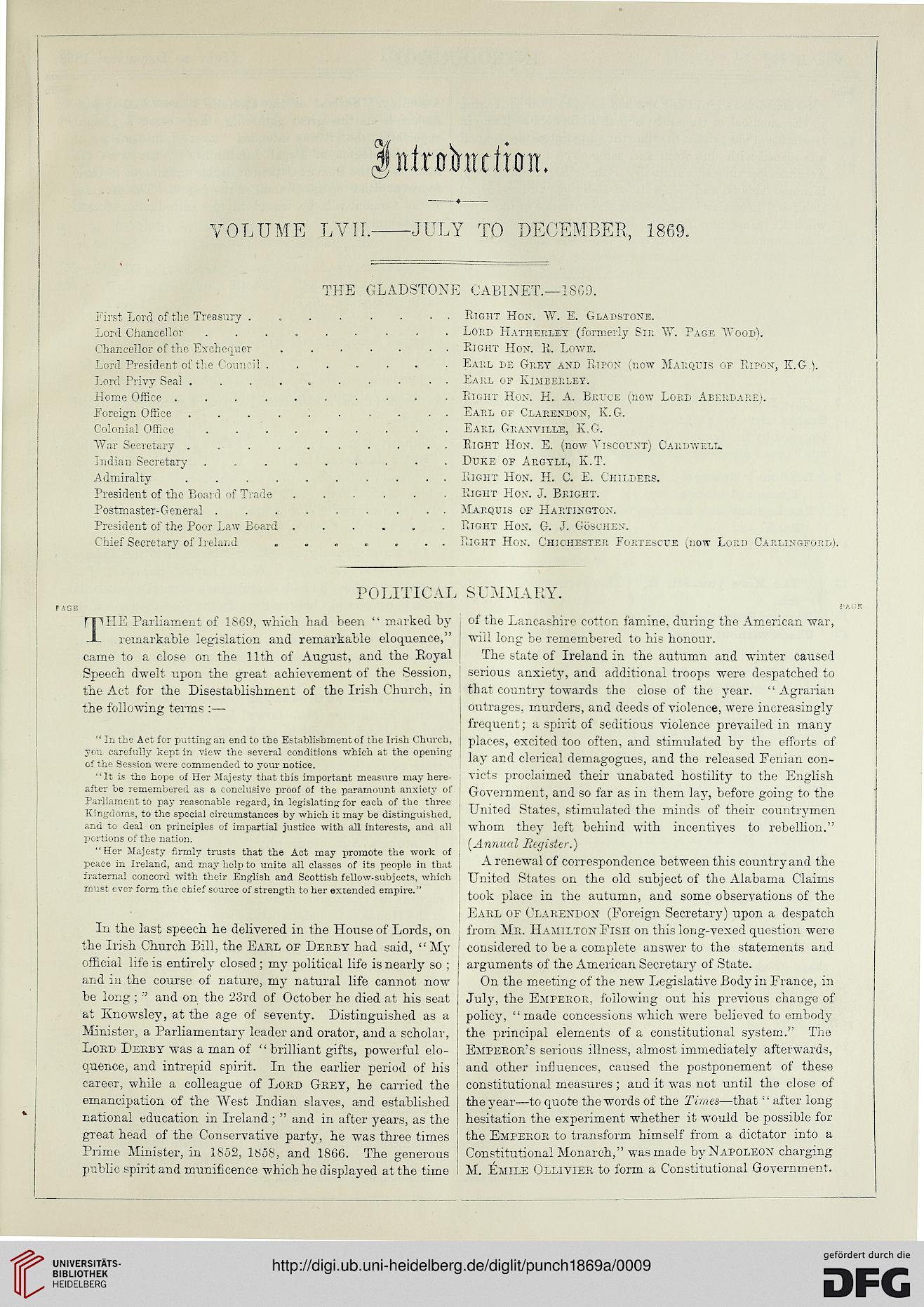 THE Parliament of 1869, which had been " marked by
remarkable legislation and remarkable eloquence,"
came to a close on the 11th of August, and the Royal
Speech dwelt upon the great achievement of the Session,
the Act for the Disestablishment of the Irish Church, in
the following terms :—

" In the Act for putting an end to the Establishment of the Irish Church,
you carefully kept in view the several conditions which at the opening
of the Session were commended to your notice.

"It is the hope of Her Majesty that this important measure may here-
after be remembered as a conclusive proof of the paramount anxiety of
Parliament to pay reasonable regard, in legislating for each of the three
Kingdoms, to the special circumstances by which it may be distinguished,
and to deal on principles of impartial justice with all interests, and all
portions of the nation.

"Her Majesty firmly trusts that the Act may promote the woi-k of
peace in Ireland, and may help to unite all classes of its people in that
fraternal concord with their English and Scottish fellow-subjects, which
must ever form the chief source of strength to her extended empire."

In the last speech he delivered in the House of Lords, on
the Irish Church Bill, the Earl of Derby had said, " My
official life is entirely closed ; my political life is nearly so ;
and in the course of nature, my natural life cannot now
be long ; " and on the 23rd of October he died at his seat
at Knowsley, at the age of seventy. Distinguished as a
Minister, a Parliamentary leader and orator, and a scholar,
Lord Derby was a man of " brilliant gifts, powerful elo-
quence, and intrepid spirit. In the earlier period of his
career, while a colleague of Lord Grey, he carried the
emancipation of the West Indian slaves, and established
national education in Ireland ; " and in after years, as the
great head of the Conservative party, he was three times
Prime Minister, in 1852, 1858, and 1866. The generous
public spirit and munificence which he displayed at the time

of the Lancashire cotton famine, during the American war,
will long be remembered to his honour.

The state of Ireland in the autumn and winter caused
serious anxiety, and additional troops were despatched to
that country towards the close of the year. "Agrarian
outrages, murders, and deeds of violence, were increasingly
frequent; a spirit of seditious violence prevailed in many
places, excited too often, and stimulated by the efforts of
lay and clerical demagogues, and the released Fenian con-
victs proclaimed their unabated hostility to the English
Government, and so far as in them lay, before going to the
United States, stimulated the minds of their countrymen
whom they left behind with incentives to rebellion."
[Annual Register.)

A renewal of correspondence between this country and the
United States on the old subject of the Alabama Claims
took place in the autumn, and some observations of the
Earl of Clarendon (Foreign Secretary) upon a despatch
from Mr. HAMILTON Fisn on this long-vexed question were
considered to be a complete answer to the statements and
arguments of the American Secretary of State.

On the meeting of the new Legislative Body in France, in
July, the Emperor, following out his previous change of
policy, "made concessions which were believed to embody
the principal elements of a constitutional system." The
Emperor's serious illness, almost immediately afterwards,
and other influences, caused the postponement of these
constitutional measures; and it was not until the close of
the year—to quote the words of the Times—that '' after long
hesitation the experiment whether it would be possible for
the Emperor to transform himself from a dictator into a
Constitutional Monarch," was made by Napoleon charging
M. Emile Ollivier to form a Constitutional Government.