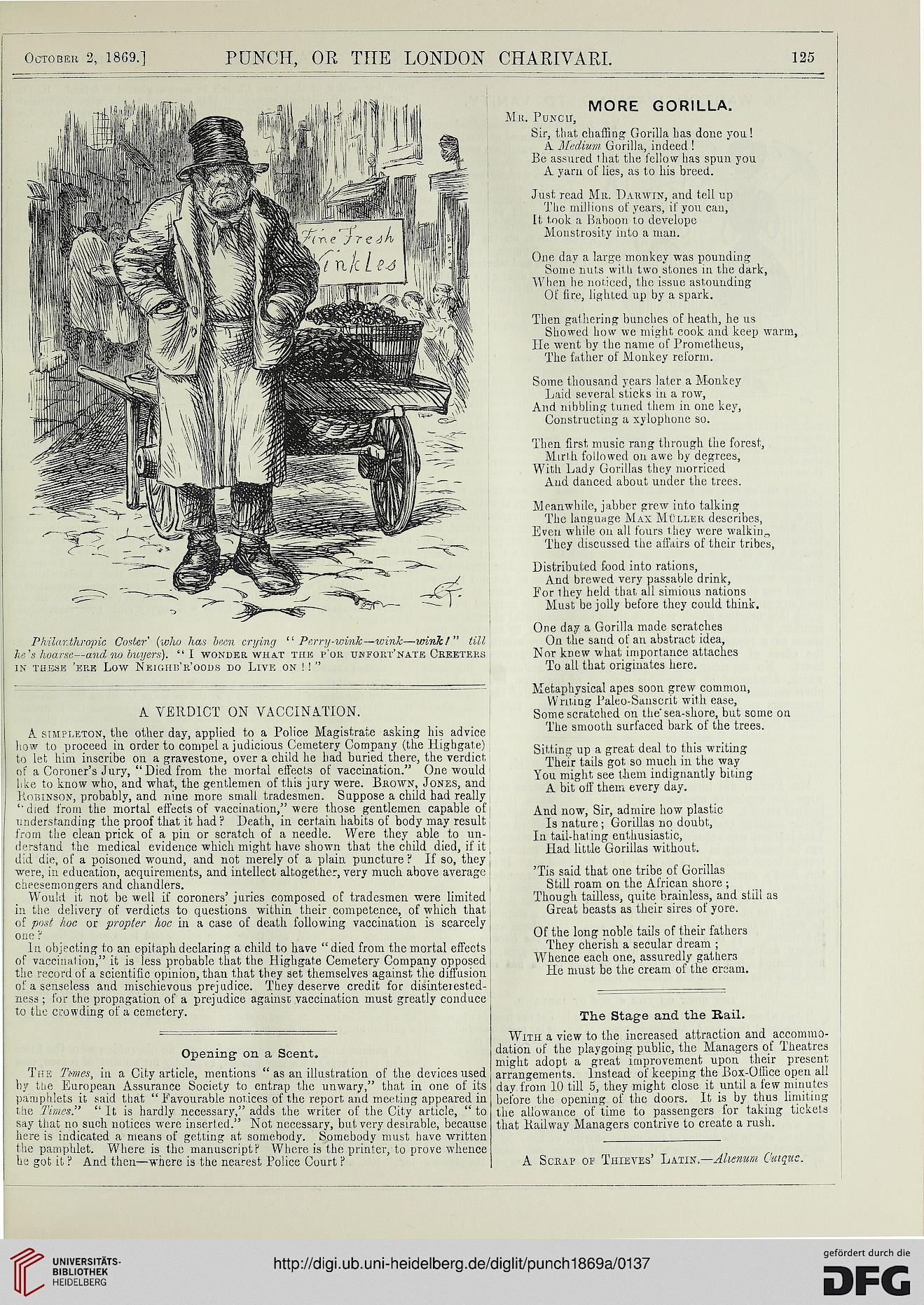 Sir, that chaffing Gorilla has done you!

A Medium Gorilla, indeed !
Be assured that the fellow has spun you

A yarn of lies, as to his breed.

Just read Mr. Darwin, and tell up
The millions of years, if you can,

It took a Baboon to develope
Monstrosity into a man.

One day a large monkey was pounding
Some nuts with two stones in the dark,

When he noticed, the issue astounding
Of fire, lighted up by a spark.

Then galhering bunches of heath, he us

He went by the name of Prometheus,
The father of Monkey reform.

Some thousand years later a Monkey

Laid several sticks in a row,
And nibbling tuned them in one key,

Constructing a xylophone so.

Then first music rang through the forest,
Mirth followed on awe by degrees,

With Lady Gorillas they morriced
And danced about under the trees.

Even while on ad fours they were walkin0
They discussed the affairs of their tribes,

For they held that, all simious nations
Must be jolly before they could think.

One day a Gorilla made scratches
Philanthropic Coster {who has been crying " Perry-wink—wink—wirikl" till On the sand of an abstract idea,

in these 'ere Low Neigiib'r'oods do Live on ! ! " To all that originates here.

Writing Paleo-Sauscrit with ease,
A VERDICT ON VACCINATION. Some scratched on the sea-shore, but some on

A simpleton, the other day, applied to a Police Magistrate asking his advice The smoottl surfaced bark of the trees-

to let him inscribe on a gravestone, over a child he had buried there, the verdict, Their tails "ot so much in the way°

of a Coroner's Jury, "Died from the mortal effects of vaccination." One would you might see them indignantly bitin^

like to know who, and what, the gentlemen of this jury were. Brown, Jones, and ^ bit°off them every day °

''died from the mortal effects of vaccination," were those gentlemen capable ofj And now, Sir, admire how plastic

understanding the proof that it had ? Death, in certain habits of body may result j ts nature ; Gorillas no doubt,

from the clean prick of a pin or scratch of a needle. Were they able to un- In tail-hating enthusiastic,

derstand the medical evidence which might have shown that the child died, if it J£ad little Gorillas without,

did die, of a poisoned wound, and not merely of a plain puncture? If so, they j

were, in education, acquirements, and intellect altogether, very much above average \ 'Tis said that one tribe of Gorillas

cheesemongers and chandlers. Still roam on the African shore ;

Would it not be well if coroners' juries composed of tradesmen were limited Though tailless, quite brainless, and still as

in the delivery of verdicts to questions within their competence, of which that
of post hoc or propter hoc in a case of death following vaccination is scarcely
one ?

In objecting to an epitaph declaring a child to have " died from the mortal effects
of vaccination," it is less probable that the Highgate Cemetery Company opposed
the record of a scientific opinion, than that they set themselves against the diffusion
of a senseless and mischievous prejudice. They deserve credit for disinteiested-.
ness ; for the propagation of a prejudice against; vaccination must greatly conduce
to the crowding of a cemetery.

Great beasts as their sires of yore.

Of the long noble tails of their fathers
They cherish a secular dream ;

Whence each one, assuredly gathers
He must be the cream of the cream.

Opening on a Scent.

The Ttmes, in a City article, mentions " as an illustration of the devices used
by the European Assurance Society to entrap the unwary," that in one of its
pamphlets it said that " Eavourable notices of the report and meeting appeared in
the Times." " It is hardly necessary," adds the writer of the City article, " to
say that no such notices were inserted." Not necessary, but very desirable, because
here is indicated a means of getting at somebody. Somebody must have written
the pamphlet. Where is the manuscript P Where is the printer, to prove whence
he got it ? And then—where is the nearest Police Court ?

The Stage and the Rail.

With a view to the increased attraction and accommo-
dation of the playgoing public, the Managers of Theatres
might adopt a great improvement upon their present
arrangements. Instead of keeping the Box-Ollice open all
day from 10 till 5, they might close it until a few minutes
before the opening of the doors. It is by thus limiting
the allowance of time to passengers for taking tickets
that Kailway Managers contrive to create a rush.