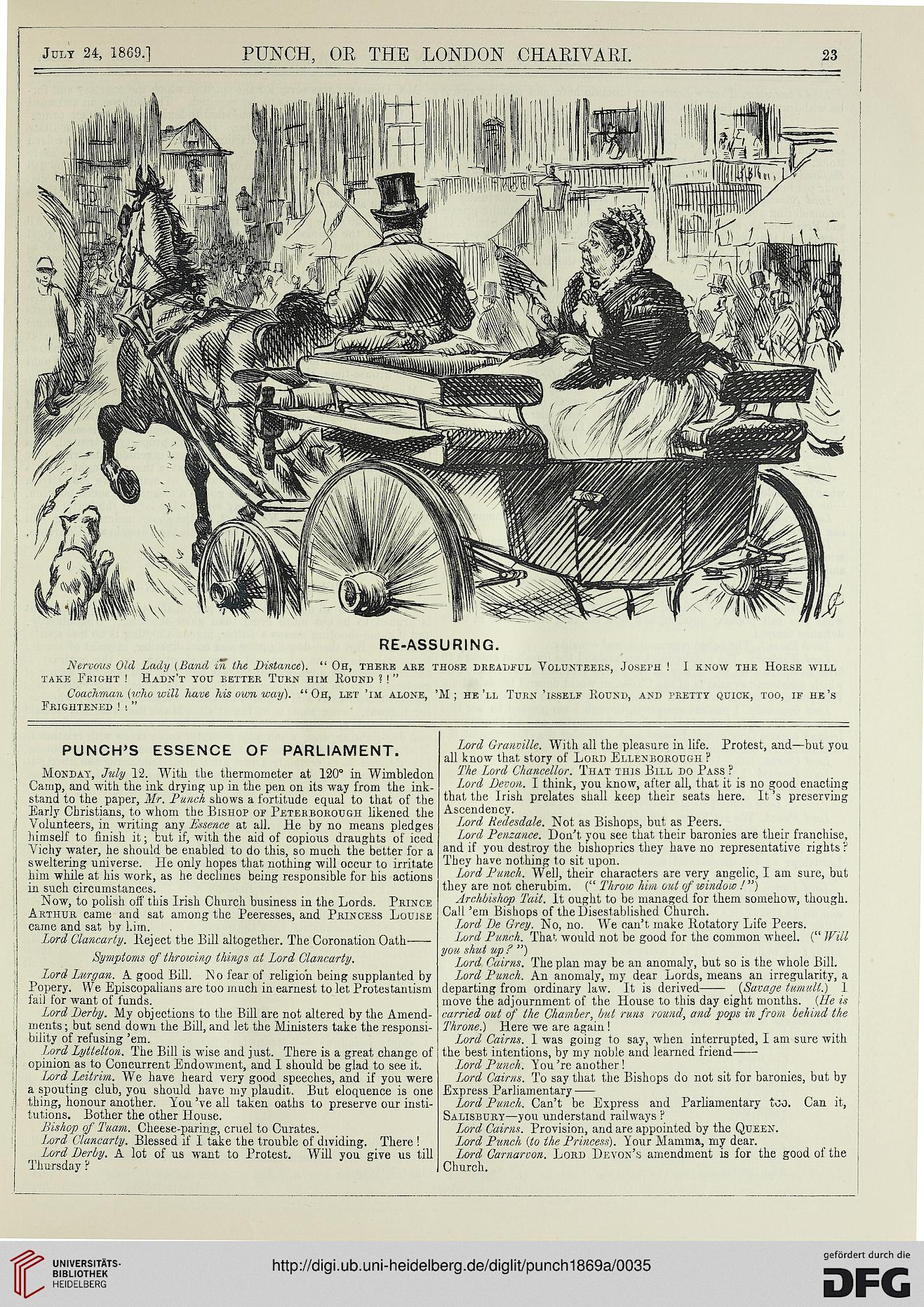 Nervous Old Lady (Band in the Distance). " Oh, there ake those dreadful Volunteers, Joseph ! I know the Horse will
take Fright ! Hadn't you better Turn him Round ? ! "

Monday, July 12. With the thermometer at 120° in Wimbledon
Camp, and with the ink drying up in the pen on its way from the ink-
stand to the paper, Mr. Punch shows a fortitude equal to that of the
Early Christians, to whom the Bishop of Peterborough likened the
Volunteers, in writing any Essence at all. He by no means pledges
himself to finish it; but if, with the aid of copious draughts of iced
Vichy water, he should be enabled to do this, so much the better for a
sweltering universe. He only hopes that nothing will occur to irritate
him while at his work, as he declines being responsible for his actions
in such circumstances.

Now, to polish oh' this Irish Church business in the Lords. Prince
Arthur, came and sat among the Peeresses, and Princess Louise
came and sat by Lim.

Lord Lurgan. A good Bill. IM o fear of religion being supplanted by
Popery. We Episcopalians are too much in earnest to let Protestantism
fail for want of funds.

Lord Derby. My objections to the Bill are not altered by the Amend-
ments ; but send down the Bill, and let the Ministers take the responsi-
bility of refusing 'em.

Lord Lyitelton. The Bill is wise and just. There is a great change of
opinion as to Concurrent Endowment, and I should be glad to see it.

Lord Leitrim. We have heard very good speeches, and if you were
a spouting club, you should have my plaudit. But eloquence is one
thing, honour another. You've all taken oaths to preserve our insti-
tutions. Bother the other House.

Lord Clancarty. Blessed if I take the trouble of dividing. There !

Lord Derby. A lot of us want to Protest. Will you give us till
Thursday ?

Lord Granville. With all the pleasure in life. Protest, and—but you
all know that story of Lord Ellenborough ?

The Lord Chancellor. That this Bill do Pass ?

Lord Devon. I think, you know, after all, that it is no good enacting
that the Irish prelates shall keep their seats here. It's preserving
Ascendency.

Lord Redesdale. Not as Bishops, but as Peers.

Lord Penzance. Don't you see that their baronies are their franchise,
and if you destroy the bishoprics they have no representative rights ?
They have nothing to sit upon.

Lord Punch. Well, their characters are very angelic, I am sure, but
they are not cherubim. (" Throw him out of window ! )

Archbishop Tait. It ought to be managed for them somehow, though.
Call 'em Bishops of the Disestablished Church.

Lord Punch. That would not be good for the common wheel. (" Will
you shut up ? ")

Lord Cairns. The plan may be an anomaly, but so is the whole Bill.

Lord Punch. An anomaly, my dear Lords, means an irregularity, a

departing from ordinary law. It is derived- (Savage tumult.) 1

move the adjournment of the House to this day eight months. (He is
carried out of the Chamber, but runs round, and pops in from behind the
Throne) Here we are again !

Lord Cairns. 1 was goiug to say, when interrupted, I am sure with
the best intentions, by my noble and learned friend-

Lord Punch. You're another !

Luord Cairns. To say that the Bishops do not sit for baronies, but by
Express Parliamentary-

Lord Punch. Can't be Express and Parliamentary too. Can it,
Salisbury—you understand railways ?

Lord Cairns. Provision, and are appointed by the Queen.

Lord Punch (to the Princess). Your Mamma, my dear.

Lord Carnarvon. Lord Devon's amendment is for the good of the
Church.