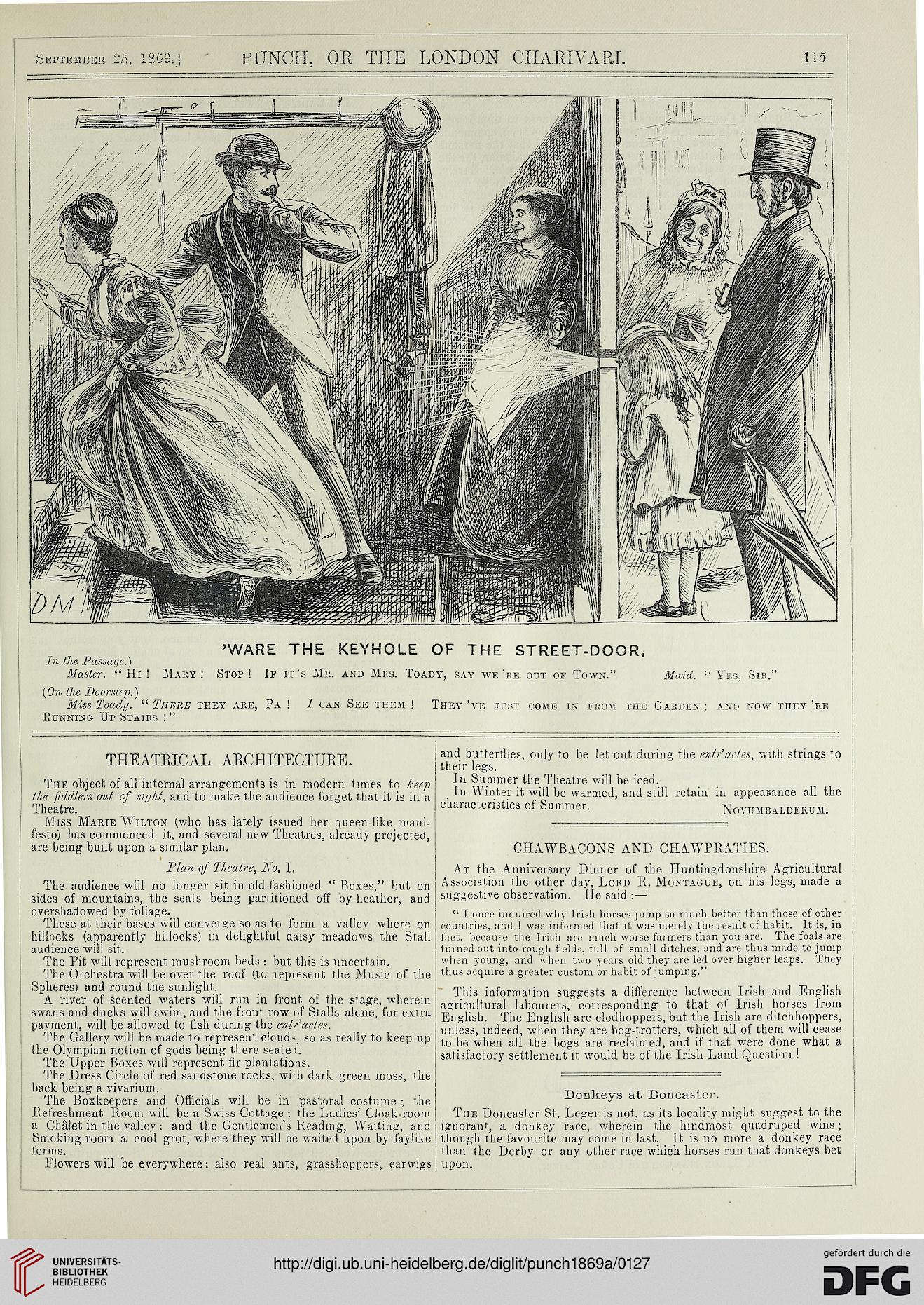 FlTNOH, OR THE LONDON CHARIVARI.

'ware the keyhole of the street-door.

Miss Toady. "There they are, Pa ! / can See them ! They've just come in from the Garden; and now they're
Running Up-Staies !"

The object of all internal arrangement's is in modern times tn keep
the fiddlers out of sight, and to make the audience forget that it is in a
Theatre.

Miss Marie Wilton (who has lately issued her queen-like mani-
festo) has commenced it, and several new Theatres, already projected,
are being built upon a similar plan.

The audience "will no longer sit in old-fashioned " Boxes," but on
sides of mountains, the seats being partitioned off by heather, and
overshadowed by foliage.

and butterflies, only to be let out during the entr'actes, with strings to
their legs,
lu Summer the Theatre will be iced.

In Winter it will be warmed, and still retain in appea&ance all the
characteristics of Summer. Novumbalderum.

At the Anniversary Dinner of the Huntingdonshire Agricultural
Association the other day, Lord R. Montague, on his legs, made a
suggestive observation. He said : —

" I once inquired why Iri?h horses jump so much better than those of other

These at their bases will converge so as to form a valley where on countries, and L was informed that it was merely the result of habit. It is, in

The Pit will represent mushroom beds : but this is uncertain.

The Orchestra will be over the roof (to represent the Music of the
Spheres) and round the sunlight.

A river of scented waters will run in front of the stage, wherein
swans and ducks will swim, and the front row of Stalls akne, for exira
payment, will be allowed to fish during the entr'actes.

The Gallery will be made to represent cloud*, so as really to keep up

the Olympian notion of gods being there sestet. satisfactory settlementTt would beoftKe^Irish Land Question^!
the Upper Boxes will represent tir plantations.

The Dress Circle of red sandstone rocks, with dark green moss, the ~~

The Boxkeepers and Officials will be in pastoral costume; the Donkeys at Doncatter.

Refreshment Room will be a Swiss Cottage : the Ladies' Cloak-room The Doncaster St. Leger is not, as its locality might suggest to the

fact, because the Irish are much worse farmers than you are. The foals are
turned out into rough fields, full of small ditches, and are thus made to jump
when young, and when two years old they are led over higher leaps. They
thus acquire a greater custom or habit of jumping."

This information suggests a difference between Irish and English
agricultural labourers, corresponding to that of Irish horses from
English. The English are clodhoppers, but the Irish are ditchhoppers,
unless, indeed, when they are bog-trotters, which all of them will cease
to be when all the bogs are reclaimed, and if that were done what a

a Chalet in the valley: and the Gentlemen's Reading, Waiting, and
Smoking-room a cool grot, where they will be waited upon by faylike
forms.

ignorant, a donkey race, wherein the hindmost quadruped wins;
though the favourite may come in last. It is no more a donkey race
than the Derby or any other race which horses run that donkeys bet
upon.