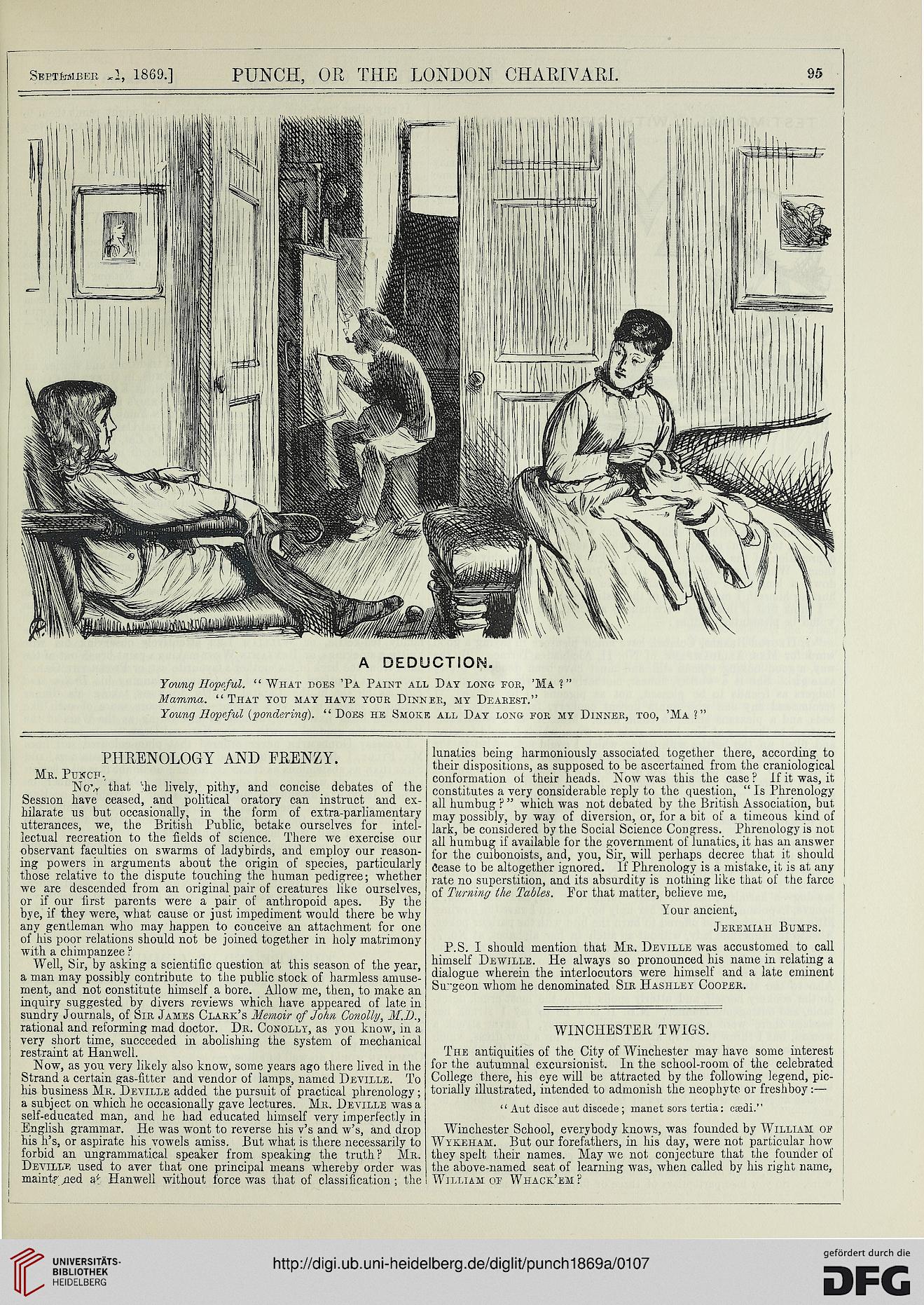 Young Hopeful. " What does 'Pa Paint all Day long for, 'Ma 1"
Mamma. "That you may have your Dinner, my Dearest."

Young Hopeful (pondering). " Does he Smoke all Day long for my Dinner, too, 'Ma ?"

Nov that ''he lively, pithy, and concise debates of the
Session have ceased, and political oratory can instruct and ex-
hilarate us but occasionally, in the form of extra-parliamentary
utterances, we, the British Public, betake ourselves for intel-
lectual recreation to the fields of science. There we exercise our
observant faculties on swarms of ladybirds, and employ our reason-
ing powers in arguments about the origin of species, particularly
those relative to the dispute touching the human pedigree; whether
we are descended from an original pair of creatures like ourselves,
or if our first parents were a pair of anthropoid apes. By the
bye, if they were, what cause or just impediment would there be why
any gentleman who may happen to conceive an attachment for one
of his poor relations should not be joined together in holy matrimony
with a chimpanzee ?

Well, Sir, by asking a scientific question at this season of the year,
a man may possibly contribute to the public stock of harmless amuse-
ment, and not constitute himself a bore. Allow me, then, to make an
inquiry suggested by divers reviews which have appeared of late in
sundry Journals, of Sir. James Clark's Memoir of John Conolly, M.I).,
rational and reforming mad doctor. Dr. Conolly, as you know, in a
very short time, succeeded in abolishing the system of mechanical
restraint at Hanwell.

Now, as you very likely also know, some years ago there lived in the
Strand a certain gas-fitter and vendor of lamps, named Deville. To
his business Mr.. Deville added the pursuit of practical phrenology;
a subject on which he occasionally gave lectures. Mr. Deville was a
self-educated man, and he had educated himself very imperfectly in
English grammar. He was wont to reverse his v's and w's, and drop
his h's, or aspirate his vowels amiss. But what is there necessarily to
forbid an ungrammatical speaker from speaking the truth? Mr.
Deville used to aver that one principal means whereby order was
maixttr ned a': Hanwell without force was that of classification ; the

lunatics being harmoniously associated together there, according to
their dispositions, as supposed to be ascertained from the craniological
conformation ol their heads. Now was this the case? If it was, it
constitutes a very considerable reply to the question, " Is Phrenology
all humbug ? " which was not debated by the British Association, but
may possibly, by way of diversion, or, for a bit of a timeous kind of
lark, be considered by the Social Science Congress. Phrenology is not
all humbug if available for the government of lunatics, it has an answer
for the cuibonoists, and, you, Sir, will perhaps decree that it should
Cease to be altogether ignored. If Phrenology is a mistake, it is at any
rate no superstition, and its absurdity is nothing like that of the farce
of Turning the Tables. Por that matter, believe me,

P.S. I should mention that Mr. Deville was accustomed to call
himself Dewille. He always so pronounced his name in relating a
dialogue wherein the interlocutors were himself and a late eminent
Surgeon whom he denominated Sir Hashley Cooper.

The antiquities of the City of Winchester may have some interest
for the autumnal excursionist. In the school-room of the celebrated
College there, his eye will be attracted by the following legend, pic-
torially illustrated, intended to admonish the neophyte or freshboy:—

Winchester School, everybody knows, was founded by William of
Wykeham. But our forefathers, in his day, were not particular how
they spelt their names. May we not conjecture that the founder of
the above-named seat of learning was, when called by his right name,
William of Whack'em ?