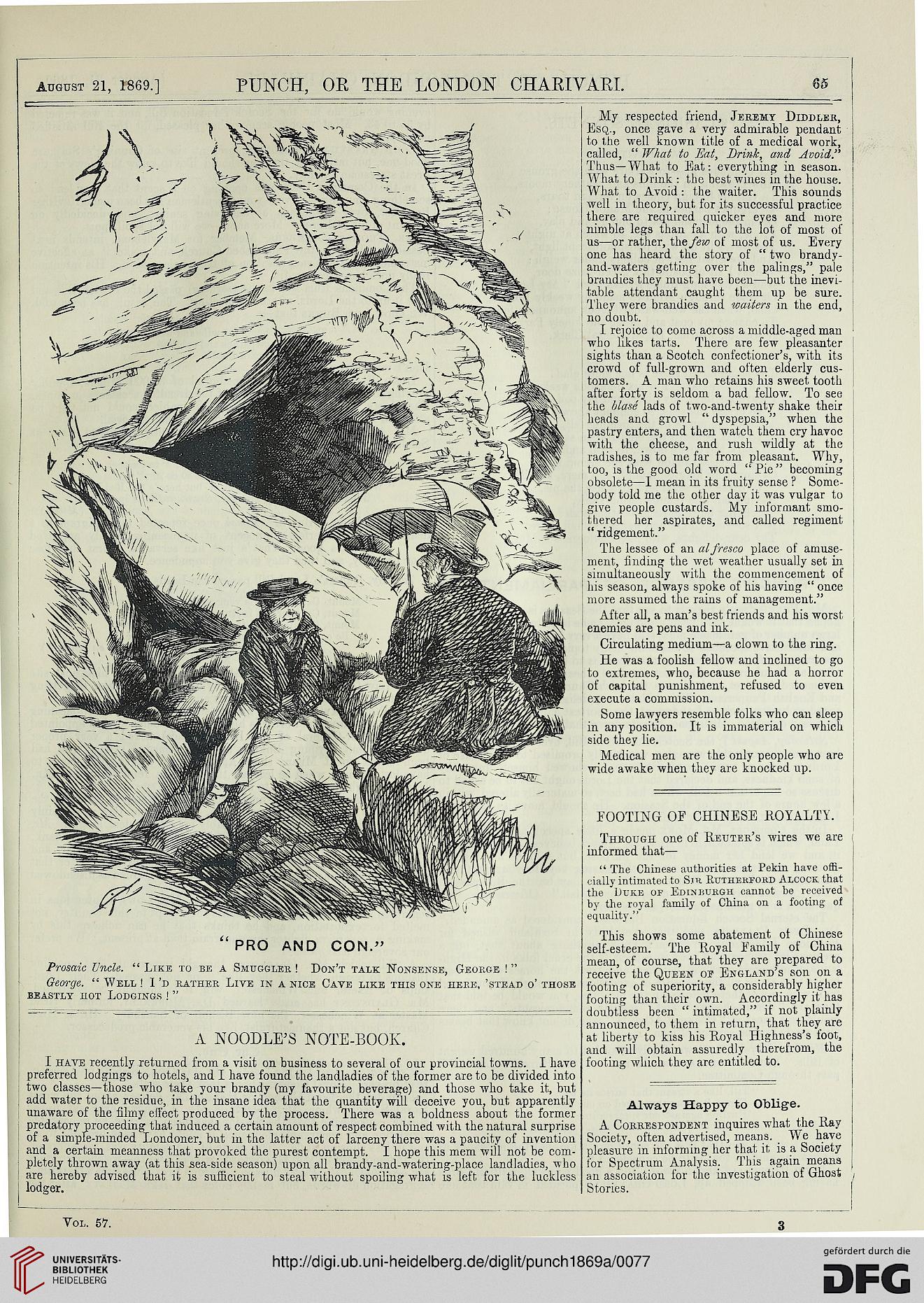 Prosaic Uncle. " Like to be a Smuggler ! Don't talk Nonsense, George ! "

George. " Well ! I'd rather Live in a nice Cave like this one here, 'stead o' those

I have recently returned from a visit on business to several of our provincial towns. I have
preferred lodgings to hotels, and I have found the landladies of the former are to be divided into
two classes—those who take your brandy (my favourite beverage) and those who take it, but
add water to the residue, in the insane idea that the quantity will deceive you, but apparently
unaware of the filmy effect produced by the process. There was a boldness about the former
predatory proceeding that induced a certain amount of respect combined with the natural surprise
of a simple-minded Londoner, but in the latter act of larceny there was a paucity of invention
and a certain meanness that provoked the purest contempt. I hope this mem will not be com-
pletely thrown away (at this sea-side season) upon all brandy-and-watering-place landladies, who
are hereby advised that it is sufficient to steal without spoiling what is left for the luckless
lodger.

My respected friend, Jeremy Diddler,
Esq., once gave a very admirable pendant
to the well known title of a medical work,
called, " What to Hat, Drink, and Avoid"
Thus—What to Eat: everything in season.
What to Drink : the best wines in the house.
What to Avoid : the waiter. This sounds
well in theory, but for its successful practice
there are required quicker eves and more
nimble legs than fall to the lot of most of
us—or rather, the few of most of us. Every
one has heard the story of " two brandy-
and-waters getting over the palings," pale
brandies they must have been—but the inevi-
table attendant caught them up be sure.
They were brandies and waiters in the end,
no doubt.

I rejoice to come across a middle-aged man
who likes tarts. There are few pleasanter
sights than a Scotch confectioner's, with its
crowd of full-grown and often elderly cus-
tomers. A man who retains his sweet tooth
after forty is seldom a bad fellow. To see
the blase lads of two-and-twenty shake their
heads and growl " dyspepsia," when the
pastry enters, and then watch them cry havoc
with the cheese, and rush wildly at the
radishes, is to me far from pleasant. Why,
I too, is the good old word " Pie" becoming
obsolete—1 mean in its fruity sense ? Some-
; body told me the other day it was vulgar to
j give people custards. My informant smo-
| thered her aspirates, and called regiment
" ridgement."

The lessee of an al fresco place of amuse-
; ment, finding the wet weather usually set in
j simultaneously with the commencement of
his season, always spoke of his having " once
j more assumed the rains of management."

After all, a man's best friends and his worst
enemies are pens and ink.

Circulating medium—a clown to the ring.

He was a foolish fellow and inclined to go
to extremes, who, because he had a horror
of capital punishment, refused to even
execute a commission.

Some lawyers resemble folks who can sleep
in any position. It is immaterial on which
side they lie.

Medical men are the only people who are
wide awake when they are knocked up.

A Correspondent inquires what the Ray
Society, often advertised, means. We have
pleasure in informing her that it is a Society
for Spectrum Analysis. This again means
an association for the investigation of Ghost
Stories.

Through one of Retjter's wires we are (
informed that—

" The Chinese authorities at Pekin have offi-
cially intimated to Sm Kutherford Alcock that
the DrKE of Edinburgh cannot he received
by the royal family of China on a footing of
equality."

This shows some abatement ot Chinese
self-esteem. The Royal Family of China
mean, of course, that they are prepared to
receive the Queen op England's son on a
footing of superiority, a considerably higher
footing than their own. Accordingly it has
doubtless been " intimated," if not plainly
announced, to them in return, that they are
at liberty to kiss his Royal Highness's foot,
and will obtain assuredly therefrom, the
footing which they are entitled to.