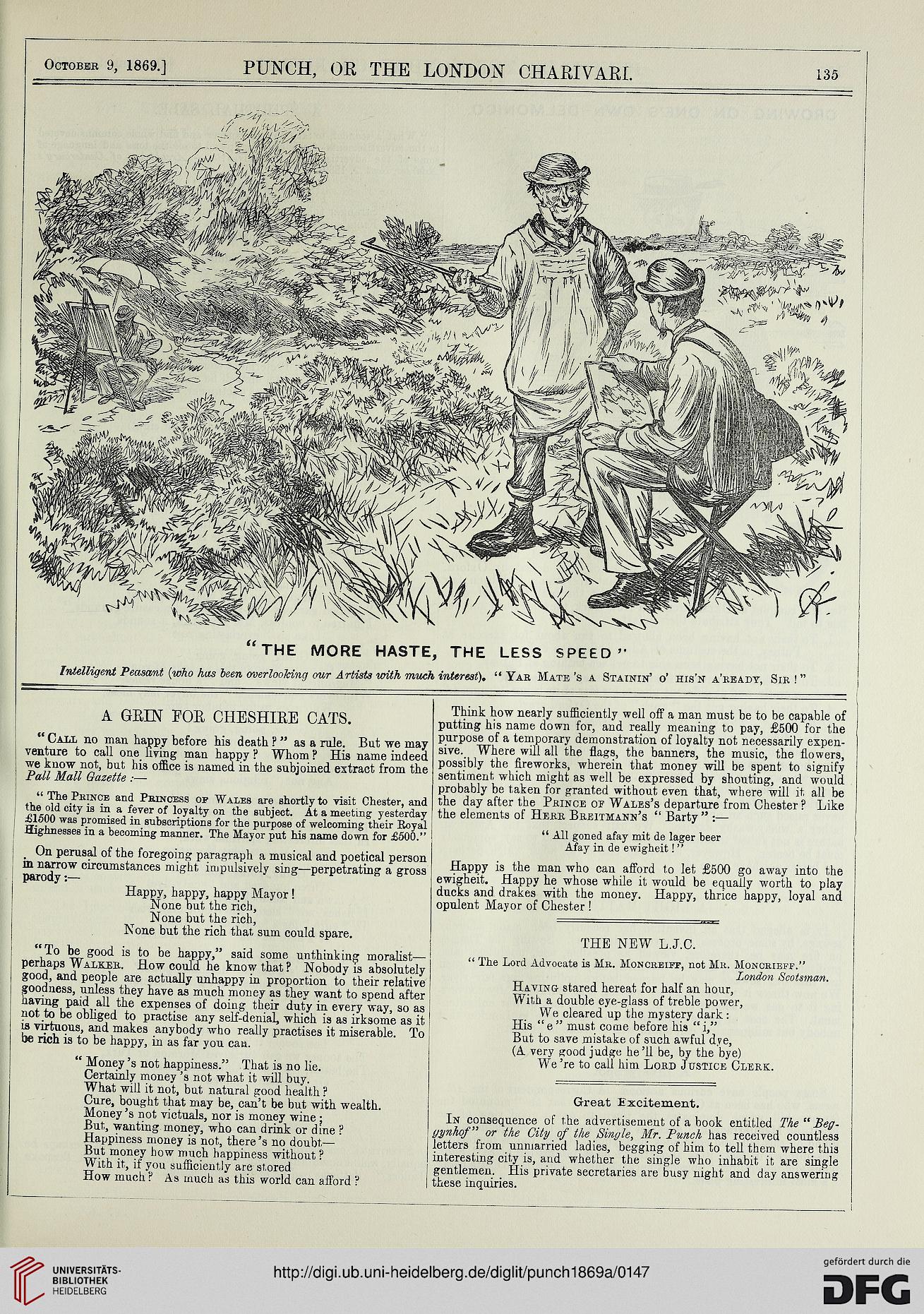 THE MORE HASTE, THE LESS SPEED "

Intelligent Peasant (who has been overlooking our Artists with much interest), "Yak Mate's a Stainin' o' his'n a'ready, Sir!"

A GRIN FOR CHESHIRE CATS.

" Call no man happy before his death ? " as a rule. But we may
venture to call one living man happy ? Whom P His name indeed
we know not, but his office is named in the subjoined extract from the
Pall Mall Gazette :—

" The Prince and Princess op Wales are shortly to visit Chester, and
the old city is in a fever of loyalty on the subject. At a meeting yesterday
£1500 was promised in subscriptions for the purpose of welcoming their Royal
Highnesses in a becoming manner. The Mayor put his name down for £500."

On perusal of the foregoing paragraph a musical and poetical person
in narrow circumstances might impulsively sing—perpetrating a gross
parody:—

None but the rich,

"To be good is to be happy," said some unthinking moralist—
perhaps Walker, flow could he know that ? Nobody is absolutely
good, and people are actually unhappy in proportion to their relative
goodness, unless they have as much money as they want to spend after
having paid all the expenses of doing their duty in every way, so as
not to be obliged to practise any self-deniaL which is as irksome as it
is virtuous, and makes anybody who really practises it miserable. To
be rich is to be happy, in as far you can.

" Money's not happiness." That is no lie.
Certainly money's not what it will buy.
What will it not, but natural good health ?
Cure, bought that may be, can't be but with wealth.
Money's not victuals, nor is money wine j
But, wanting money, who can drink or dine ?
Happiness money is not, there's no doubt—
But money how much happiness without ?
With it, if y^ou sufficiently are stored
How much ? As much as this world can afford ?

Think how nearly sufficiently well off a man must be to be capable of
putting his name down for, and really meaning to pay, £500 for the
purpose of a temporary demonstration of loyalty not necessarily expen-
sive. Where will all the flags, the banners, the music, the flowers,
possibly the fireworks, wherein that money will be spent to signify
sentiment which might as well be expressed by shouting, and would
probably be taken for granted without even that, where will it all be
the day after the Prince oe Wales's departure from Chester ? Like
the elements of Herr Breitmann's " Barty " :—

Happy is the man who can afford to let £500 go away into the
ewigheit. Happy he whose while it would be equally worth to play
ducks and drakes with the money. Happy, thrice happy, loyal and
opulent Mayor of Chester !

; The Lord Advocate is Mr. Moncreiit, not Mr. Moncrieff."

Having stared hereat for half an hour,
With a double eye-glass of treble power,

We cleared up the mystery dark :
His "e" must come before his "i,"
But to save mistake of such awful d.ve,
(A very good judge he'll be, by the bye)

We 're to call him Lord Justice Clerk.

In consequence of the advertisement of a book entitled The " Beg-
yynhof" or the City of the Single, Mr. Punch has received countless
letters from unmarried ladies, begging of him to tell them where this
interesting city is, and whether the single who inhabit it are single
gentlemen. His private secretaries are busy night and day answering
these inquiries.