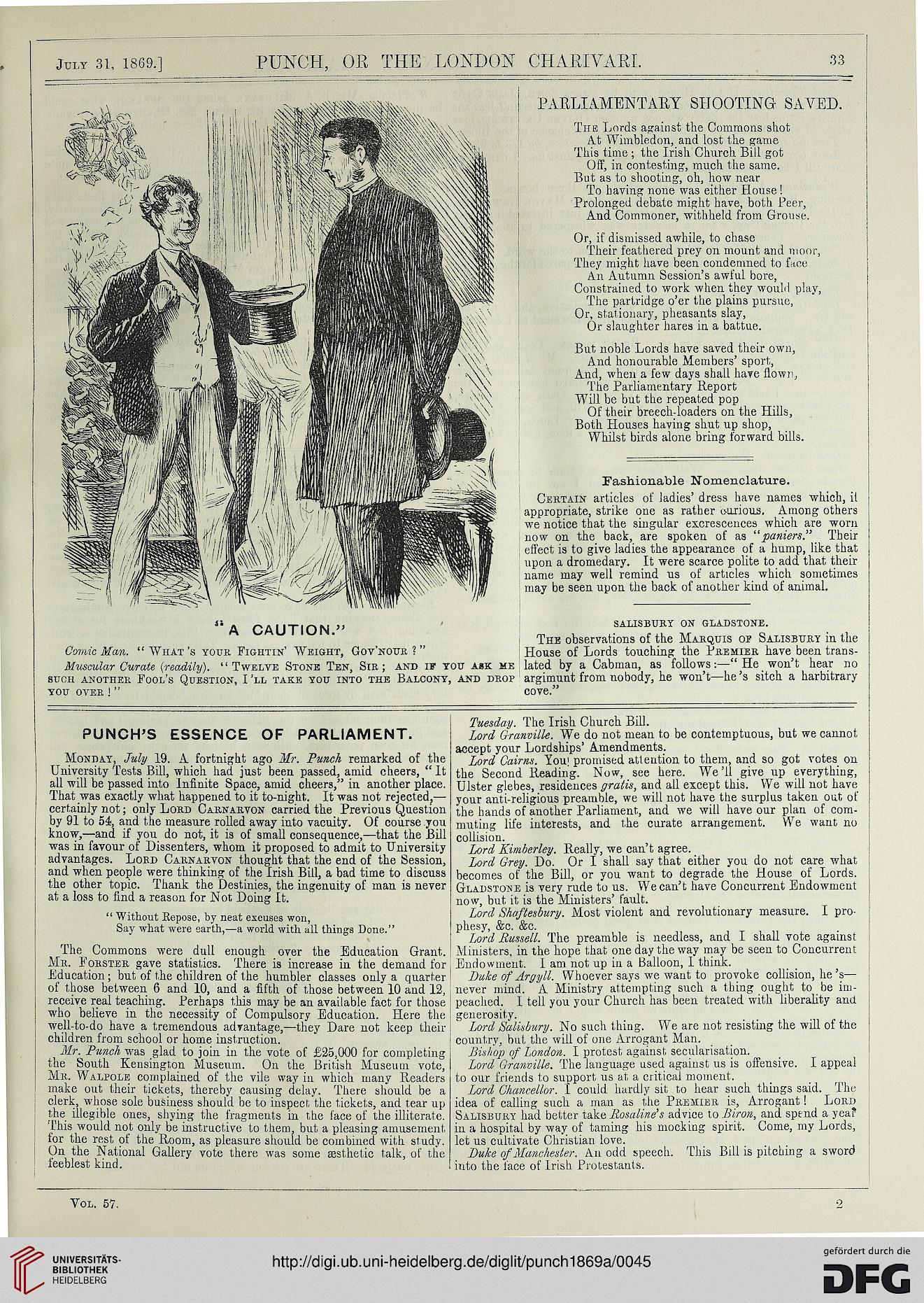 The Lords against the Commons shot

At Wimbledon, and lost the game
This time ; the Irish Church Bill got

OIF, in contesting, much the same.
But as to shooting, oh, how near

To having none was either House!
Prolonged debate might have, both Peer,

And Commoner, withheld from Grouse.

Or, if dismissed awhile, to chase

Their feathered prey on mount and moor,
They might have been condemned to face

An Autumn Session's awful bore,
Constrained to work when they woul<l play,

The partridge o'er the plains pursue,
Or, stationary, pheasants slay,

Or slaughter hares in a battue.

But noble Lords have saved their own,

And honourable Members' sport,
And, when a few days shall have flown,

The Parliamentary Report
Will be but the repeated pop

Of their breech-loaders on the Hills,
Both Houses having shut up shop,

Certain articles of ladies' dress have names which, il
appropriate, strike one as rather curious. Among others
we notice that the singular excrescences which are worn
now on the back, are spoken of as "paniers." Their
effect is to give ladies the appearance of a hump, like that
upon a dromedary. It were scarce polite to add that their
name may well remind us of articles which sometimes
may be seen upon the back of another kind of animal.

The observations of the Marquis op Salisbury in the
Comic Man. "What's your Fightin' Weight, Gov'nour ?" House of Lords touching the Premier have been trans-

Muscular Curate (readily). "Twelve Stone Ten, Sir; and if you a»k me lated by a Cabman, as follows:—" He won't hear no
such another Fool's Question, I'll take you into the Balcony, and drop argimunt from nobody, he won't—he's sitch a harbitrary
you over ! " cove."

Monday, July 19. A fortnight ago Mr. Punch remarked of the
University Tests Bill, which had just been passed, amid cheers, " It
all will be passed into Infinite Space, amid cheers," in another place.
That was exactly what happened to it to-night. It was not rejected,—■
certainly not; only Lord Carnarvon carried the Previous Question
by 91 to 54, and the measure rolled away into vacuity. Of course you
know,—and if you do not, it is of small consequence,—that the Bill
was in favour of Dissenters, whom it proposed to admit to University
advantages. Lord Carnarvon thought that the end of the Session,
and when people were thinking of the Irish Bill, a bad time to discuss
the other topic. Thank the Destinies, the ingenuity of man is never
at a loss to find a reason for Not Doing It.

" Without Kepose, by neat excuses won,
Say what were earth,—a world with all things Done."

The Commons were dull enough over the Education Grant.

Lord Granville. We do not mean to be contemptuous, but we cannot
accept your Lordships' Amendments.

Lord Cairns. You| promised attention to them, and so got votes on
the Second Reading. Now, see here. We'll give up everything,
Ulster glebes, residences gratis, and all except this. We will not have
your anti-religious preamble, we will not have the surplus taken out of
the hands of another Parliament, and we will have our plan of com-
muting life interests, and the curate arrangement. We want, no
collision.

Lord Grey. Do. Or I shall say that either you do not care what
becomes of the Bill, or you want to degrade the House of Lords.
Gladstone is very rude to us. We can't have Concurrent Endowment
now, but it is the Ministers' fault.

Lord Russell. The preamble is needless, and I shall vote against
Ministers, in the hope that one day the way may be seen to Concurrent

Mr. Porster gave statistics. There is increase in the demand for, Endowment. 1 am not up in a Balloon, I think.
Education ; but of the children of the humbler classes only a quarter ' Duke of Argyll. Whoever says we want to provoke collision, he's—
of those between 6 and 10, and a fifth of those between 10 and 12, j never mind. A Ministry attempting such a thing ought to be im-
receive real teaching. Perhaps this may be an available fact for those I peached. I tell you your Church has been treated with liberality and
who believe in the necessity of Compulsory Education. Here the ! generosity.

well-to-do have a tremendous advantage,—they Dare not keep their i Lord Salisbury. No such thing. We are not resisting the will of the
children from school or home instruction. country, but the will of one xlrrogant Man.

Mr. Punch was glad to join in the vote of £25,000 for completing Bishop of London. I protest against secularisation,
the South Kensington Museum. On the British Museum vote,
Mr. Walpole complained of the vile way in which many Readers
make out their tickets, thereby causing delay. There should be a
clerk, whose sole business should be to inspect the tickets, and tear up
the illegible ones, shying the fragments in the face of the illiterate.
Ihis would not only be instructive to them, but a pleasing amusement
for the rest of the Room, as pleasure should be combined with stud v.
On the National Gallery vote there was some aesthetic talk, of the
ieeblest kind.

Lord Granville. The language used against us is offensive. I appeal
to our friends to support us at a critical moment.

Lord Chancellor. I could hardly sit to hear such things said. The
idea of calling such a man as the Premier is, Arrogant! Lord
Salisbury had better take Rosaline's advice to Biron, and spend a yea?
in a hospital by way of taming his mocking spirit. Come, my Lords,
let us cultivate Christian love.

Duke of Manchester. An odd speech. This Bill is pitching a sword
into the face of Irish Protestants.