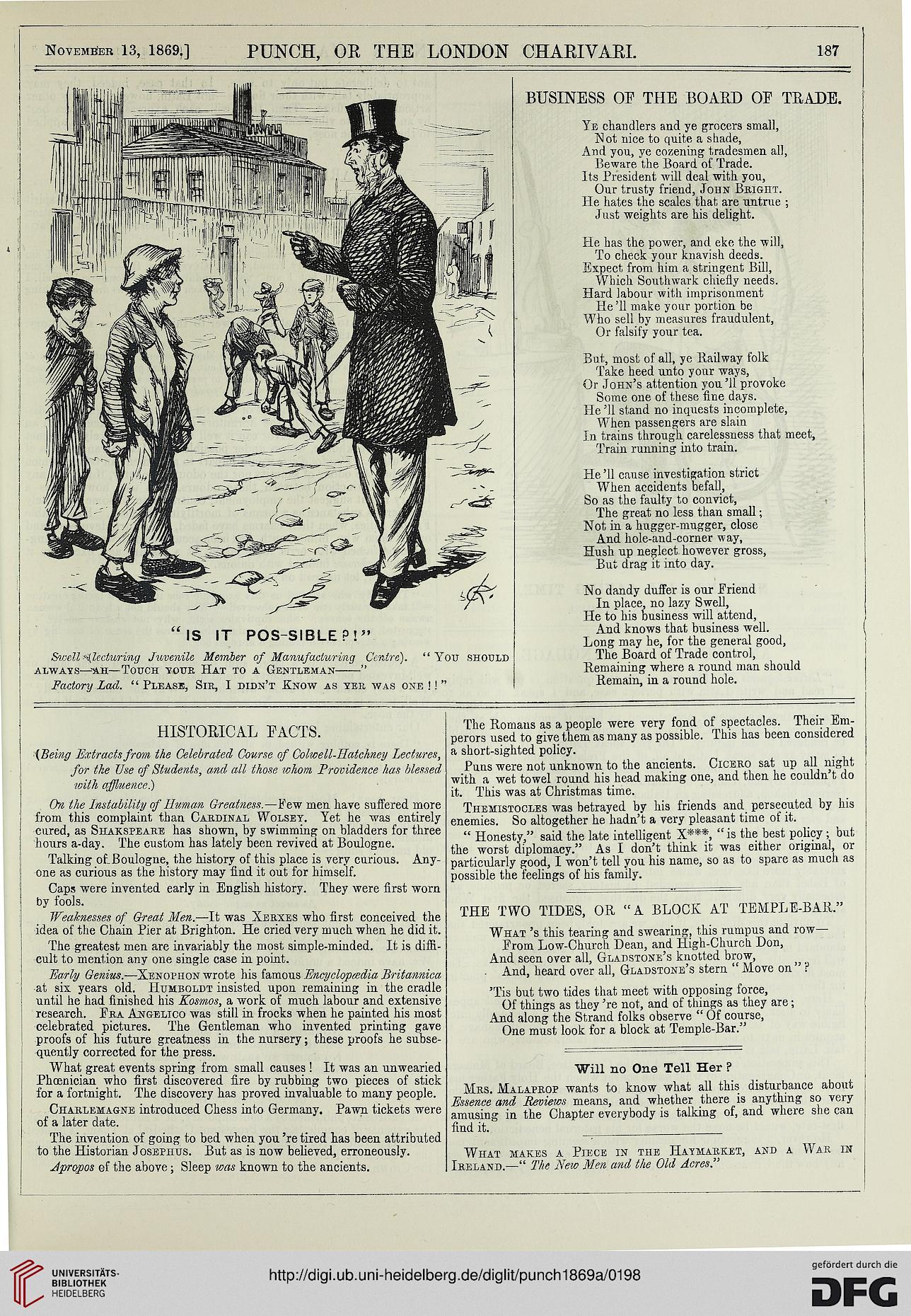 Swell ^lecturing Juvenile Member of Manufacturing Centre). "You should

BUSINESS OF THE BOARD OF TRADE.

Not nice to quite a shade,
And you, ye cozening tradesmen all,

Beware the Board of Trade.
Its President will deal with you,

Our trusty friend, John Bright.
He hates the scales that are untrue ;

Just weights are his delight.

He has the power, and eke the will,

To check your knavish deeds.
Expect from him a stringent Bill,

He '11 make your portion be
Who sell by measures fraudulent,

Or falsify your tea.

But, most of all, ye Railway folk

Take heed unto your ways,
Or John's attention you '11 provoke

Some one of these fine days.
He '11 stand no inquests incomplete,

When passengers are slain
In trains through carelessness that meet,

He '11 cause investigation strict

When accidents befall,
So as the faulty to convict,

The great no less than small;
Not in a hugger-mugger, close

And hole-and-corner way,
Hush up neglect however gross,

But drag it into day.

No dandy duffer is our Eriend

In place, no lazy Swell,
He to his business will attend,

And knows that business well.
Long may he, for the general good,

The Board of Trade control,
Remaining where a round man should

Remain, in a round hole.

{Being Extracts from the Celebrated Course of Colwell-Hatchney Lectures,
for the Use of Students, and all those whom Providence has blessed
toith affluence.)

On the Instability of Human Greatness.—Few men have suffered more
from this complaint than Cardinal Wolsey. Yet he was entirely
cured, as Shakspeare has shown, by swimming on bladders for three
hours a-day. The custom has lately been revived at Boulogne.

Talking otBoulogne, the history of this place is very curious. Any-
one as curious as the history may find it out for himself.

Caps were invented early in English history. They were first worn
by fools.

Weaknesses of Great Men.—It was Xerxes who first conceived the
idea of the Chain Pier at Brighton. He cried very much when he did it.

The greatest men are invariably the most simple-minded. It is diffi-
cult to mention any one single case in point.

Early Genius.—Xenophon wrote his famous Encyclopaedia Britannica
at six years old. Humboldt insisted upon remaining in the cradle
until he had finished, his Kosmos, a work of much labour and extensive
research. Era Angelico was still in frocks when he painted his most
celebrated pictures. The Gentleman who invented printing gave
proofs of his future greatness in the nursery; these proofs he subse-
quently corrected for the press.

What great events spring from small causes ! It was an unwearied
Phoenician who first discovered fire by rubbing two pieces of stick
for a fortnight. The discovery has proved invaluable to many people.

Charlemagne introduced Chess into Germany. Pawn tickets were
of a later date.

The invention of going to bed when you 're tired has been attributed
to the Historian Josephus. But as is now believed, erroneously.
Jprqpos of the above; Sleep teas known to the ancients.

The Romans as a people were very fond of spectacles. Their Em-
perors used to give them as many as possible. This has been considered
a short-sighted policy.

Puns were not unknown to the ancients. Cicero sat up all night
with a wet towel round his head making one, and then he couldn't do
it. This was at Christmas time.

Themistocles was betrayed by his friends and persecuted by his
enemies. So altogether he hadn't a very pleasant time of it.

" Honesty," said the late intelligent X*** " is the best policy ; but
the worst diplomacy." As I don't think it was either original, or
particularly good, I won't tell you his name, so as to spare as much as
possible the feelings of his family.

THE TWO TIDES, OR "A BLOCK AT TEMPLE-BAR.'

What's this tearing and swearing, this rumpus and row—
From Low-Church Dean, and High-Church Don,

And along the Strand folks observe " Of course,
One must look for a block at Temple-Bar."

Will no One Tell Her ?

Mrs. Malaprop wants to know what all this disturbance about
Essence and Reviews means, and whether there is anything so very
amusing in the Chapter everybody is talking of, and where she can
find it. _

What makes a Piece in the Haymarket, and a War in
Ireland.—" The New Men and the Old Acres"