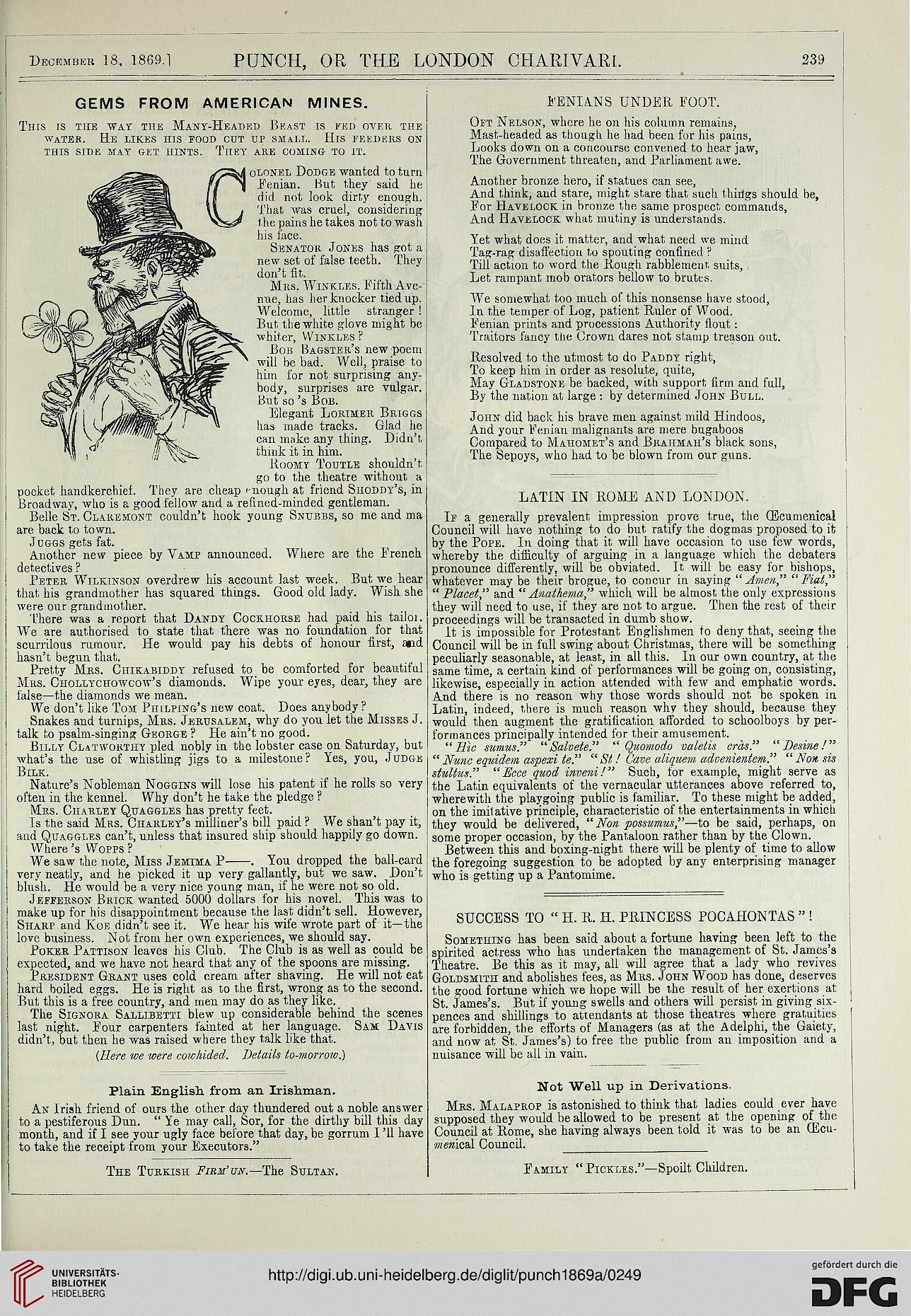 This is the way the Many-Headed Beast is fed over the
water. He likes his food cut dp small. His feeders on
this side may get hints. They are coming to it.

olonel Dodge wanted to turn
.Fenian. But they said he

Oft Nelson, where he on his column remains,
Mast-headed as though, he had been for his pains,
Looks down on a concourse convened to hear jaw,
The Government threaten, and Parliament awe.

the pains he takes not to wash
his face.

Senator^ Jones has pot a
new set of false teeth. They
don't fit.

Mrs. Winkles. Fifth Ave-
nue, has her knocker tied up.
Welcome, little stranger !
But the white glove might be
whiter, Winkles ?

Bob Bagster's new poem
will be bad. Well, praise to
him for not surprising any-
body, surprises are vulgar.
But so's Bob.

Elegant Lorimer Bbiggs
has made tracks. Glad he
can make any thing. Didn't
think it in him.
VNU Roomy Toutle shouldn't

go to the theatre without a
pocket handkerchief. They are cheap enough at friend Shoddy's, in
Broadway, who is a good fellow and a refined-minded gentleman.

Belle St. Claremont couldn't hook young Snubbs, so me and ma
are back to town.
Jcggs gets fat.

Another new piece by Vamp announced. Where are the French
detectives ?

Peter Wilkinson overdrew his account last week. But we hear
that his grandmother has squared things. Good old lady. Wish she
were our grandmother.

There was a report that Dandy Cockhorse had paid his tailoi.
We are authorised to state that there was no foundation for that
scurrilous rumour. He would pay his debts of honour first, add
hasn't begun that.

Pretty Mrs. Chikabiddy refused to be comforted for beautiful
Mrs. Chollychowcow's diamonds. Wipe your eyes, dear, they are
false—the diamonds we mean.

We don't like Tom Phllping's new coat. Does anybody ?

Snakes and turnips, Mrs. Jerusalem, why do you let the Misses J.
talk to psalm-singing George ? He ain't no good.

Billy Clatworthy pled nobly in the lobster case on Saturday, but
what's the use of whistling jigs to a milestone? Yes, you, Judge
Bilk.

Nature's Nobleman Noggins will lose his patent if he rolls so very
often in the kennel. Why don't he take the pledge ?
Mrs. Charley Quaggles has pretty feet

Another bronze hero, if statues can see,
did "not look dirty enough" i Anci think, and stare, might stare that such things should be,

That was cruel, considering ' For Havelock in bronze the same prospect commands,

And Havelock what mutiny is understands.

Yet what does it matter, and what need we mind
Tag-rag disaffection to spouting confined ?
Till action to word the Rough rabblemenr, suits,
Let rampant mob orators bellow to brutes.

We somewhat too much of this nonsense have stood,
In the temper of Log, patient Ruler of Wood.
Fenian prints and processions Authority flout:
Traitors fancy the Crown dares not stamp treason out.

Resolved to the utmost to do Paddy right,

To keep him in order as resolute, quite,

May Gladstone be backed, with support firm and full,

By the nation at large : by determined John Bull.

John did back his brave men against mild Hindoos,
And your Fenian malignants are mere bugaboos
Compared to Mahomet's and Brahmah's black sons,
The Sepoys, who had to be blown from our guns.

LATIN IN ROME AND LONDON.

If a generally prevalent impression prove true, the (Ecumenical
Council will have nothing to do but ratify the dogmas proposed to it
by the Pope. In doing that it will have occasion to use few words,
whereby the difficulty of arguing in a language which the debaters
pronounce differently, will be obviated. It will be easy for bishops,
whatever may be their brogue, to concur in saying "Amen" "Fiat"
" Placet," and "Anathema" which will be almost the only expressions
they will need to use, if they are not to argue. Then the rest of their
proceedings will be transacted in dumb show.

It is impossible for Protestant Englishmen to deny that, seeing the
Council will be in full swing about Christmas, there will be something
peculiarly seasonable, at least, in all this. In our own country, at the
same time, a certain kind of performances will be going on, consisting,
likewise, especially in action attended with few and emphatic words.
And there is no reason why those words should not be spoken in
Latin, indeed, there is much reason whv they should, because they
would then augment the gratification afforded to schoolboys by per-
formances principally intended for their amusement.

" Hie sumus." " Salvete." " Quomodo valetis eras." "Desinef"
" Nunc equidem aspexi te," " St! Cave aliquem advenientem" " Non, sis
stultus." " Ecce quod inveni!" Such, for example, might serve as
the Latin equivalents of the vernacular utterances above referred to,
wherewith the playgoing public is familiar. To these might be added,
on the imitative principle, characteristic of the entertainments in which
Is the said Mrs. Charley's milliner's bill paid? We shan't pay it, they would be delivered, "Non possumus,"—-to be said, perhaps, on

and Quaggles can't, unless that insured ship should happily go down. ! some pr0per occasion, by the Pantaloon rather than by the Clown.
Where's Wopps ? Between this and boxing-night there will be plenty of time to allow

We saw the note, Miss Jemima P-. You dropped the ball-card

very neatly, and he picked it up very gallantly, but we saw. Don't
blush. He would be a very nice young man, if he were not so old.

Jefferson Brick wanted 5000 dollars for his novel. This was to
make up for his disappointment because the last didn't sell. However,
Sharp and Koe didn't see it. We hear his wife wrote part of it—the
love business. Not from her own experiences, we should say.

Poker Pattison leaves his Club. The Club is as well as could be
expected, and we have not heard that any of the spoons are missing.

President Grant uses cold cream after shaving. He will not eat
hard boiled eggs. He is right as to the first, wrong as to the second.
But this is a free country, and men may do as they like.

The Signora Salllbetti blew up considerable behind the scenes
last night. Four carpenters fainted at her language. Sam Davis
didn't, but then he was raised where they talk like that.

{Here we were cowhided. Details to-morrow.)

Plain English, from an Irishman.

An Irish friend of ours the other day thundered out a noble answer
to a pestiferous Dun. " Ye may call, Sor, for the dirthy bill this day
month, and if I see your ugly face before that day, be gorrum I '11 have
to take the receipt from your Executors."

The Turkish Firm'tjn— The Sultan.

the foregoing suggestion to be adopted by any enterprising manager
who is getting up a Pantomime.

Something has been said about a fortune having been left to the
spirited actress who has undertaken the management of St. James's
Theatre. Be this as it may, all will agree that a lady who revives
Goldsmith and abolishes fees, as Mrs. John Wood has done, deserves
the good fortune which we hope will be the result of her exertions at
St. James's. But if young swells and others will persist in giving six-
pences and shillings to attendants at those theatres where gratuities
are forbidden, the efforts of Managers (as at the Adelphi, the Gaiety,
and now at St. James's) to free the public from an imposition and a
nuisance will be all in vain.

Not Well up in Derivations.

Mrs. Maeabrop is astonished to think that ladies could ever have
supposed they would be allowed to be present at the opening of the
Council at Rome, she having always been told it was to be an (Ecu-
menical Council. _