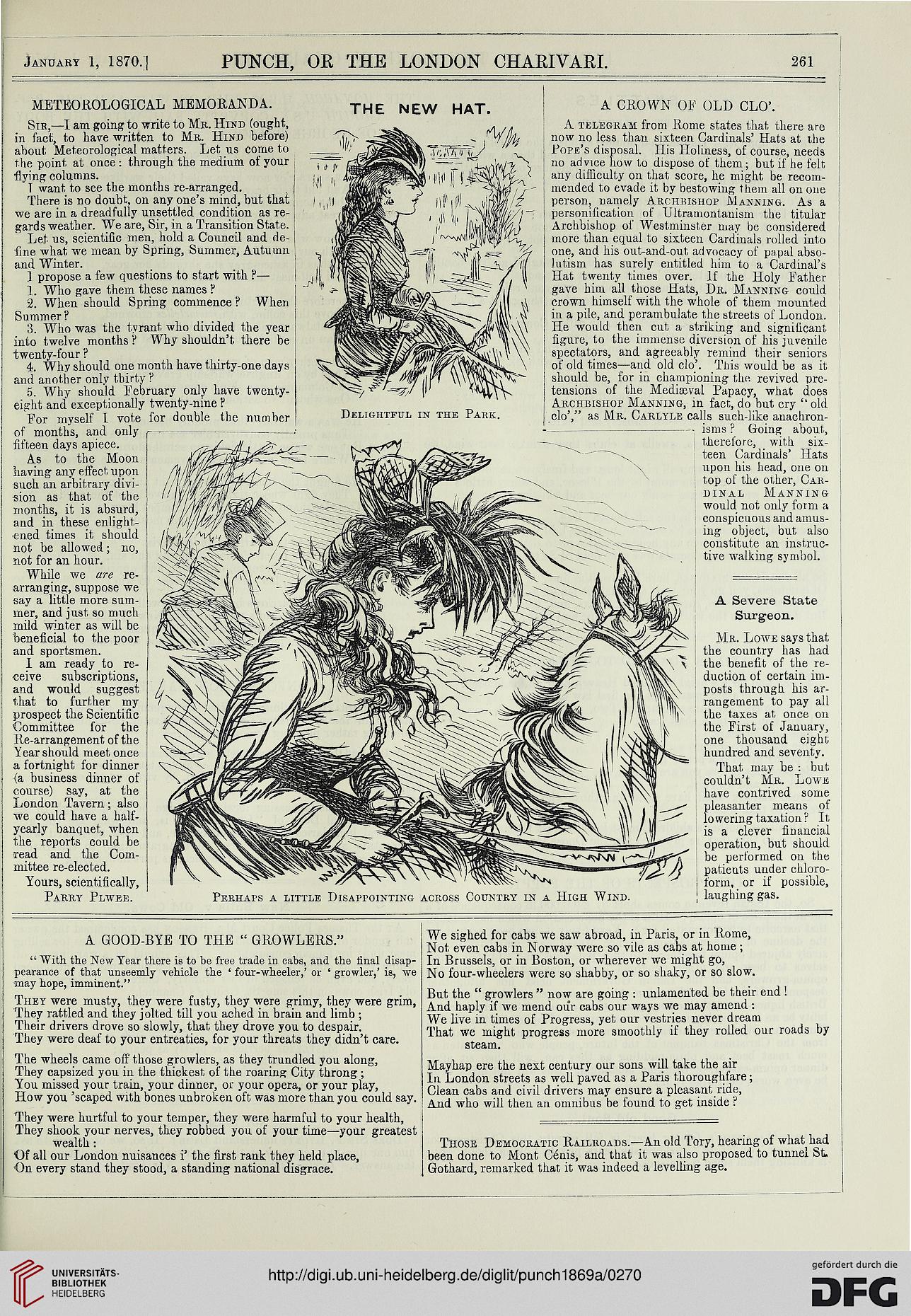 METEOROLOGICAL MEMORANDA.
Sib,—I am going to write to Mr. Hind (ought,

about Meteorological matters. Let us come to
the point at once : through the medium of your
flying columns.

T want to see the months re-arranged.
There is no doubt, on any one's mind, but that
we are in a dreadfully unsettled condition as re-
gards weather. We are, Sir, in a Transition State. \jij||l§p§jM ' ()" "'' |(\yWf% ( Archbishop of Westminster may be considered

A CROWN OF OLD CLO'.

A telegram from Rome states that there are
now no less than sixteen Cardinals' Hats at the
Pope's disposal. His Holiness, of course, needs
no advice how to dispose of them; but if he felt
any difficulty on that score, he might be recom-
mended to evade it by bestowing them all on one
person, namely Archbishop Manning. As a
personification of Ultramontanism the titular

Let us, scientific men, hold a Council and de-
fine what we mean by Spring, Summer, Autumn
and Winter.
1 propose a few questions to start with ?—

1. Who gave them these names ?

2. When should Spring commence ? When
Summer?

3. Who was the tyrant who divided the year
into twelve months ? Why shouldn't there be
twenty-four ?

4. Why should one month have thirty-one days
and another only thirty ?

5. Why should February only have twenty-
eiffht and exceptionally twenty-nine ?

Eor myself I vote for double the number Delightful in the Park.

of months, and only
fifteen days apiece.

As to the Moon
having any effect upon
such an arbitrary divi-
sion as that of the
months, it is absurd,
and in these enlight-
ened times it should
not be allowed; no,
not for an hour.

While we are re-
arranging, suppose we
say a little more sum-
mer, and just so much
mild winter as will be
beneficial to the poor
and sportsmen.

1 am ready to re-
ceive subscriptions,
and would suggest
that to further my
prospect the Scientific
Committee for the
Re-arrangement of the
Year should meet once
a fortnight for dinner
(a business dinner of
course) say, at the
London Tavern; also
we could have a half-
yearly banquet, when
the reports could be
read and the Com-
mittee re-elected.

more than equal to sixteen Cardinals rolled into
one, and his out-and-out advocacy of papal abso-
lutism has surely entitled him to a Cardinal's
Hat twenty times over, if the Holy Father
gave him all those Hats, Dr. Manning could
crown himself with the whole of them mounted
in a pile, and perambulate the streets of London.
He would then cut a striking and significant
figure, to the immense diversion of his juvenile
spectators, and agreeably remind their seniors
of old times—and old clo'. This would be as it
should be, for in championing the revived pre-
tensions of the Mediaeval Papacy, what does
Archbishop Manning, in fact, do but cry " old
clo'," as Mr. Carlyle calls such-like anachron-

therefore, with six-
teen Cardinals' Hats
upon his head, one on
top of the other, Car-
dinal Manning
would not only form a
conspicuous and amus-
ing object, but also
constitute an instruc-
tive walking symbol.

Mr. Lowe says that
the country has had
the benefit of the re-
duction of certain im-
posts through his ar-
rangement to pay all
the taxes at once on
the First of January,
one thousand eight
hundred and seventy.

That may be : but
couldn't Mr. Lowe
have contrived some
pleasanter means of
lo werin g taxation ? It
is a clever financial
operation, but should
be performed on the
patieuts under chloro-
form, or if possible,

Perhaps a little Disappointing across Country in a High Wind. laughing gas.

A GOOD-BYE TO THE " GROWLERS."

" With the New Year there is to be free trade in. cabs, and the final disap-
pearance of that unseemly vehicle the ' four-wheeler,' or ' growler,' is, we
may hope, imminent."

The wheels came off those growlers, as they trundled you along,
They capsized you in the thickest of the roaring City throng ;
You missed your train, your dinner, or your opera, or your play,
How you 'scaped with bones unbroken oft was more than you could say.

They were hurtful to your temper, they were harmful to your health,
They shook your nerves, they robbed you of your time—your greatest
wealth:

Of all our London nuisances i' the first rank they held place,
On every stand they stood, a standing national disgrace.

We sighed for cabs we saw abroad, in Paris, or in Rome,
Not even cabs in Norway were so vile as cabs at home ;
In Brussels, or in Boston, or wherever we might go,
No four-wheelers were so shabby, or so shaky, or so slow.

But the " growlers " now are going : unlamented be their end !
And haply if we mend our cabs our ways we may amend :
We live in times of Progress, yet our vestries never dream
That we might progress more smoothly if they rolled our roads by
steam.

Mayhap ere the next century our sons will take the air
In London streets as well paved as a Paris thoroughfare;
Clean cabs and civil drivers may ensure a pleasant ride,
And who will then an omnibus be found to get inside ?

Those Democratic Railroads.—An old Tory, hearing of what had
been done to Mont Cenis, and that it was also proposed to tunnel St
Gothard, remarked that it was indeed a levelling age.

Objektbeschreibung
Bildunterschrift: Delightful in the park. Perhaps a little disappointing across country in a high wind.