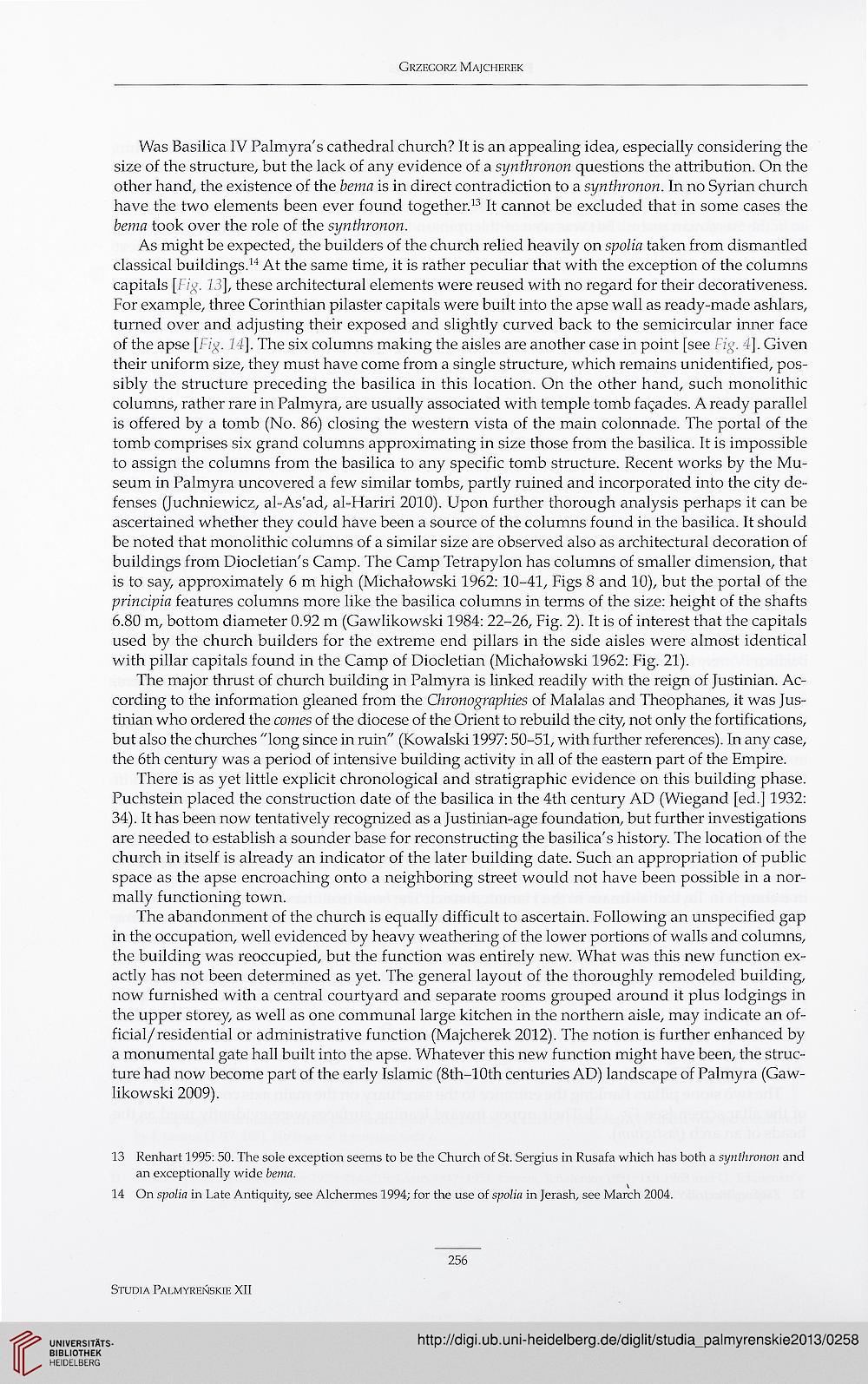 Was Basilica IV Palmyra's cathedral church? It is an appealing idea, especially considering the
size of the structure, but the lack of any evidence of a synthronon ąuestions the attribution. On the
other hand, the existence of the bema is in direct contradiction to a synthronon. In no Syrian church
have the two elements been ever found together.13 It cannot be excluded that in some cases the
bema took over the role of the synthronon.

As might be expected, the builders of the church relied heavily on spolia taken from dismantled
classical buildings.14 At the same time, it is rather peculiar that with the exception of the columns
capitals [Fig. 13], these architectural elements were reused with no regard for their decorativeness.
For example, three Corinthian pilaster capitals were built into the apse wali as ready-made ashlars,
turned over and adjusting their exposed and slightly curved back to the semicircular inner face
of the apse [Fig. 14], The six columns making the aisles are another case in point [see Fig. 4], Given
their uniform size, they must have come from a single structure, which remains unidentified, pos-
sibly the structure preceding the basilica in this location. On the other hand, such monolithic
columns, rather rare in Palmyra, are usually associated with tempie tomb faęades. Aready parallel
is offered by a tomb (No. 86) closing the western vista of the main colonnade. The portal of the
tomb comprises six grand columns approximating in size those from the basilica. It is impossible
to assign the columns from the basilica to any specific tomb structure. Recent works by the Mu-
seum in Palmyra uncovered a few similar tombs, partly ruined and incorporated into the city de-
fenses (Juchniewicz, al-As'ad, al-Hariri 2010). TJpon further thorough analysis perhaps it can be
ascertained whether they could have been a source of the columns found in the basilica. It should
be noted that monolithic columns of a similar size are observed also as architectural decoration of
buildings from Diocletian's Camp. The Camp Tetrapylon has columns of smaller dimension, that
is to say, approximately 6 m high (Michałowski 1962: 10-41, Figs 8 and 10), but the portal of the
principia features columns morę like the basilica columns in terms of the size: height of the shafts
6.80 m, bottom diameter 0.92 m (Gawlikowski 1984: 22-26, Fig. 2). It is of interest that the capitals
used by the church builders for the extreme end pillars in the side aisles were almost identical
with pillar capitals found in the Camp of Diocletian (Michałowski 1962: Fig. 21).

The major thrust of church building in Palmyra is linked readily with the reign of Justinian. Ac-
cording to the information gleaned from the Chronographies of Malałaś and Theophanes, it was Jus-
tinian who ordered the comes of the diocese of the Orient to rebuild the city, not only the fortifications,
but also the churches Gong sińce in ruin" (Kowalski 1997:50-51, with further references). In any case,
the 6th century was a period of intensive building activity in all of the eastern part of the Empire.

There is as yet little explicit chronological and stratigraphic evidence on this building phase.
Puchstein placed the construction datę of the basilica in the 4th century AD (Wiegand [ed.] 1932:
34). It has been now tentatively recognized as a Justinian-age foundation, but further investigations
are needed to establish a sounder base for reconstructing the basilica7s history. The location of the
church in itself is already an indicator of the later building datę. Such an appropriation of public
space as the apse encroaching onto a neighboring Street would not have been possible in a nor-
mally functioning town.

The abandonment of the church is eąually difficult to ascertain. Following an unspecified gap
in the occupation, well evidenced by heavy weathering of the lower portions of walls and columns,
the building was reoccupied, but the function was entirely new. What was this new function ex~
actly has not been determined as yet. The generał layout of the thoroughly remodeled building,
now furnished with a central courtyard and separate rooms grouped around it plus lodgings in
the upper storey, as well as one communal large kitchen in the northern aisle, may indicate an of-
ficial/ residential or administrative function (Majcherek 2012). The notion is further enhanced by
a monumental gate hall built into the apse. Whatever this new function might have been, the struc-
ture had now become part of the early Islamie (8th-10th centuries AD) landscape of Palmyra (Gaw-
likowski 2009).

13 Renhart 1995: 50. The sole exception seems to be the Church of St. Sergius in Rusafa which has both a synthronon and
an exceptionally wide bema.