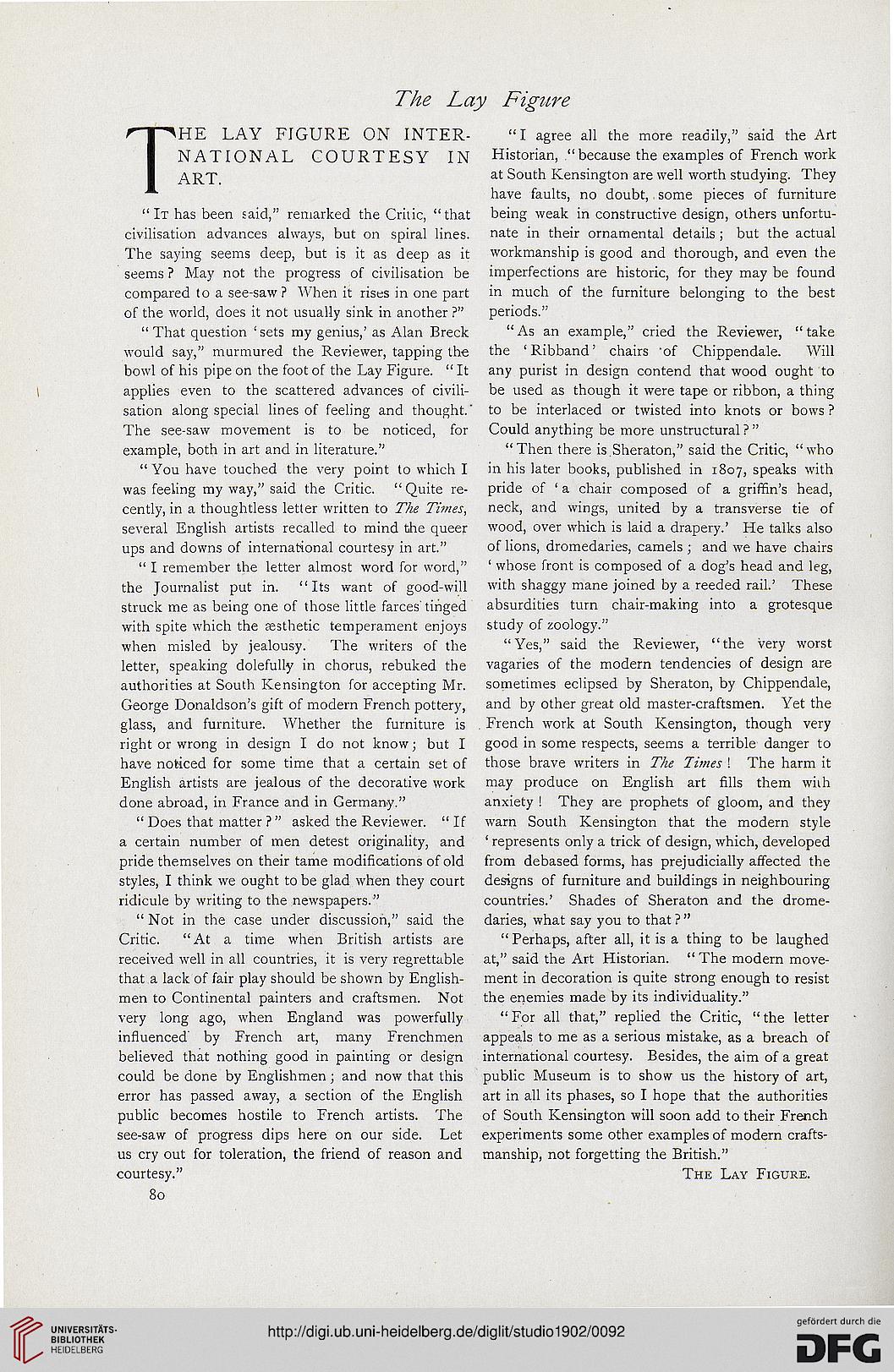 HE LAY FIGURE ON INTER-
NATIONAL COURTESY IN
ART.

"It has been said," remarked the Critic, "that
civilisation advances always, but on spiral lines.
The saying seems deep, but is it as deep as it
seems ? May not the progress of civilisation be
compared to a see-saw? When it rises in one part
of the world, does it not usually sink in another ?"

" That question ' sets my genius,' as Alan Breck
would say," murmured the Reviewer, tapping the
bowl of his pipe on the foot of the Lay Figure. " It
applies even to the scattered advances of civili-
sation along special lines of feeling and thought.'
The see-saw movement is to be noticed, for
example, both in art and in literature."

" You have touched the very point to which I
was feeling my way," said the Critic. "Quite re-
cently, in a thoughtless letter written to The Times,
several English artists recalled to mind the queer
ups and downs of international courtesy in art."

" I remember the letter almost word for word,"
the Journalist put in. "Its want of good-will
struck me as being one of those little farces' tinged
with spite which the aesthetic temperament enjoys
when misled by jealousy. The writers of the
letter, speaking dolefully in chorus, rebuked the
authorities at South Kensington for accepting Mr.
George Donaldson's gift of modern French pottery,
glass, and furniture. Whether the furniture is
right or wrong in design I do not know; but I
have noticed for some time that a certain set of
English artists are jealous of the decorative work
done abroad, in France and in Germany."

" Does that matter ? " asked the Reviewer. " If
a certain number of men detest originality, and
pride themselves on their tame modifications of old
styles, I think we ought to be glad when they court
ridicule by writing to the newspapers."

" Not in the case under discussion," said the
Critic. "At a time when British artists are
received well in all countries, it is very regrettable
that a lack of fair play should be shown by English-
men to Continental painters and craftsmen. Not
very long ago, when England was powerfully
influenced by French art, many Frenchmen
believed that nothing good in painting or design
could be done by Englishmen ; and now that this
error has passed away, a section of the English
public becomes hostile to French artists. The
see-saw of progress dips here on our side. Let
us cry out for toleration, the friend of reason and
courtesy."
80

" I agree all the more readily," said the Art
Historian, "because the examples of French work
at South Kensington are well worth studying. They
have faults, no doubt, some pieces of furniture
being weak in constructive design, others unfortu-
nate in their ornamental details ; but the actual
workmanship is good and thorough, and even the
imperfections are historic, for they may be found
in much of the furniture belonging to the best
periods."

"As an example," cried the Reviewer, "take
the ' Ribband' chairs of Chippendale. Will
any purist in design contend that wood ought to
be used as though it were tape or ribbon, a thing
to be interlaced or twisted into knots or bows ?
Could anything be more unstructural ? "

"Then there is Sheraton," said the Critic, "who
in his later books, published in 1807, speaks with
pride of ' a chair composed of a griffin's head,
neck, and wings, united by a transverse tie of
wood, over which is laid a drapery.' He talks also
of lions, dromedaries, camels ; and we have chairs
' whose front is composed of a dog's head and leg,
with shaggy mane joined by a reeded rail.' These
absurdities turn chair-making into a grotesque
study of zoology."

"Yes," said the Reviewer, "the very worst
vagaries of the modern tendencies of design are
sometimes eclipsed by Sheraton, by Chippendale,
and by other great old master-craftsmen. Yet the
French work at South Kensington, though very
good in some respects, seems a terrible danger to
those brave writers in The Times ! The harm it
may produce on English art fills them with
anxiety ! They are prophets of gloom, and they
warn South Kensington that the modern style
' represents only a trick of design, which, developed
from debased forms, has prejudicially affected the
designs of furniture and buildings in neighbouring
countries.' Shades of Sheraton and the drome-
daries, what say you to that ? "

" Ferhaps, after all, it is a thing to be laughed
at," said the Art Historian. "The modern move-
ment in decoration is quite strong enough to resist
the enemies made by its individuality."

"For all that," replied the Critic, "the letter
appeals to me as a serious mistake, as a breach of
international courtesy. Besides, the aim of a great
public Museum is to show us the history of art,
art in all its phases, so I hope that the authorities
of South Kensington will soon add to their French
experiments some other examples of modern crafts-
manship, not forgetting the British."