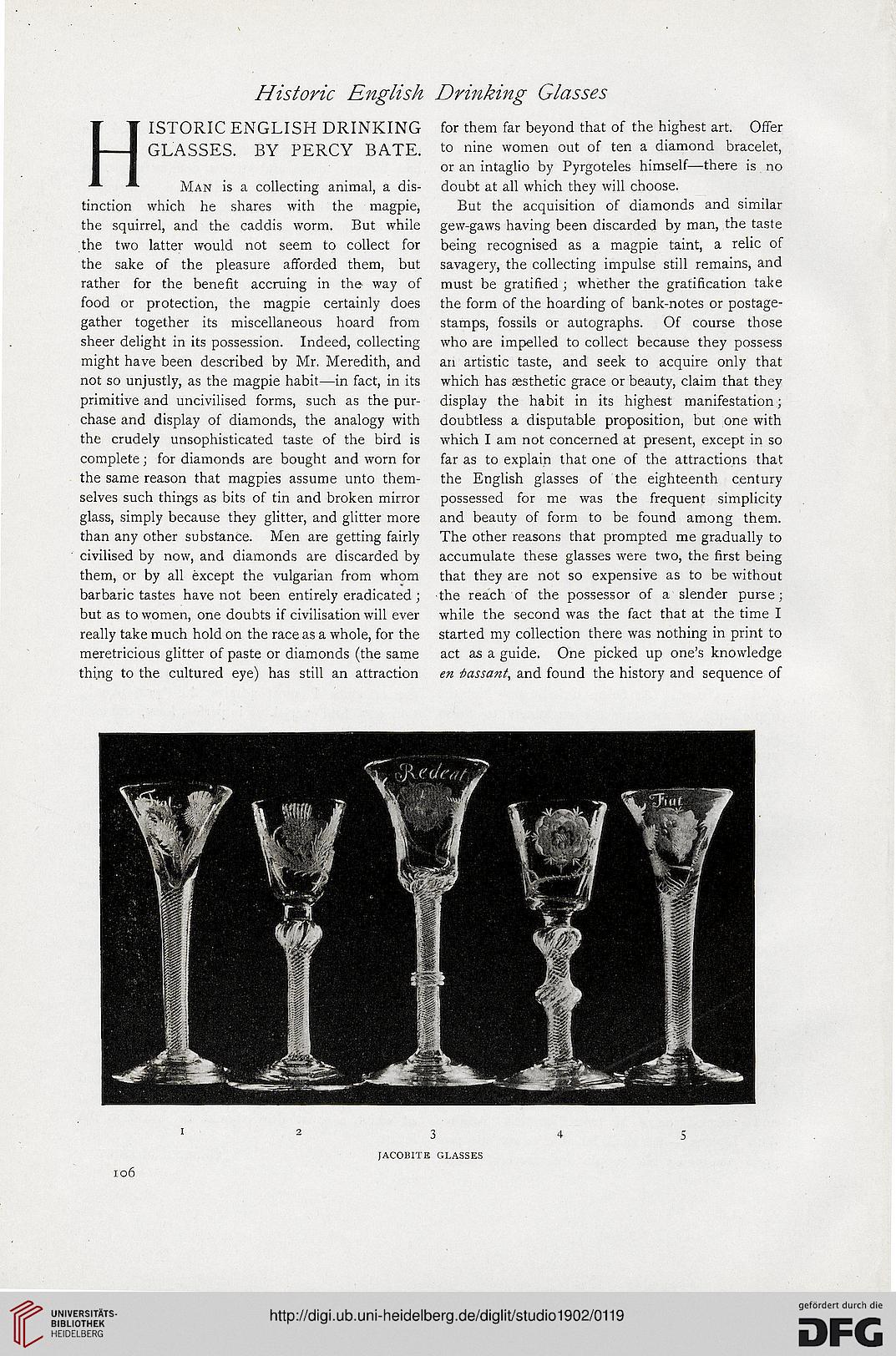 HISTORIC ENGLISH DRINKING for them far beyond that of the highest art. Offer
GLASSES. BY PERCY BATE. t0 nme women out of ten a diamond bracelet,
or an intaglio by Pyrgoteles himself—there is no
Man is a collecting animal, a dis- doubt at all which they will choose,
tinction which he shares with the magpie, But the acquisition of diamonds and similar
the squirrel, and the caddis worm. But while gew-gaws having been discarded by man, the taste
the two latter would not seem to collect for being recognised as a magpie taint, a relic of
the sake of the pleasure afforded them, but savagery, the collecting impulse still remains, and
rather for the benefit accruing in the way of must be gratified ; whether the gratification take
food or protection, the magpie certainly does the form of the hoarding of bank-notes or postage-
gather together its miscellaneous hoard from stamps, fossils or autographs. Of course those
sheer delight in its possession. Indeed, collecting who are impelled to collect because they possess
might have been described by Mr. Meredith, and an artistic taste, and seek to acquire only that
not so unjustly, as the magpie habit—in fact, in its which has aesthetic grace or beauty, claim that they
primitive and uncivilised forms, such as the pur- display the habit in its highest manifestation;
chase and display of diamonds, the analogy with doubtless a disputable proposition, but one with
the crudely unsophisticated taste of the bird is which I am not concerned at present, except in so
complete; for diamonds are bought and worn for far as to explain that one of the attractions that
the same reason that magpies assume unto them- the English glasses of the eighteenth century
selves such things as bits of tin and broken mirror possessed for me was the frequent simplicity
glass, simply because they glitter, and glitter more and beauty of form to be found among them,
than any other substance. Men are getting fairly The other reasons that prompted me gradually to
civilised by now, and diamonds are discarded by accumulate these glasses were two, the first being
them, or by all except the vulgarian from whom that they are not so expensive as to be without
barbaric tastes have not been entirely eradicated ; the reach of the possessor of a slender purse ;
but as to women, one doubts if civilisation will ever while the second was the fact that at the time I
really take much hold on the race as a whole, for the started my collection there was nothing in print to
meretricious glitter of paste or diamonds (the same act as a guide. One picked up one's knowledge
thing to the cultured eye) has still an attraction en -bassant, and found the history and sequence of