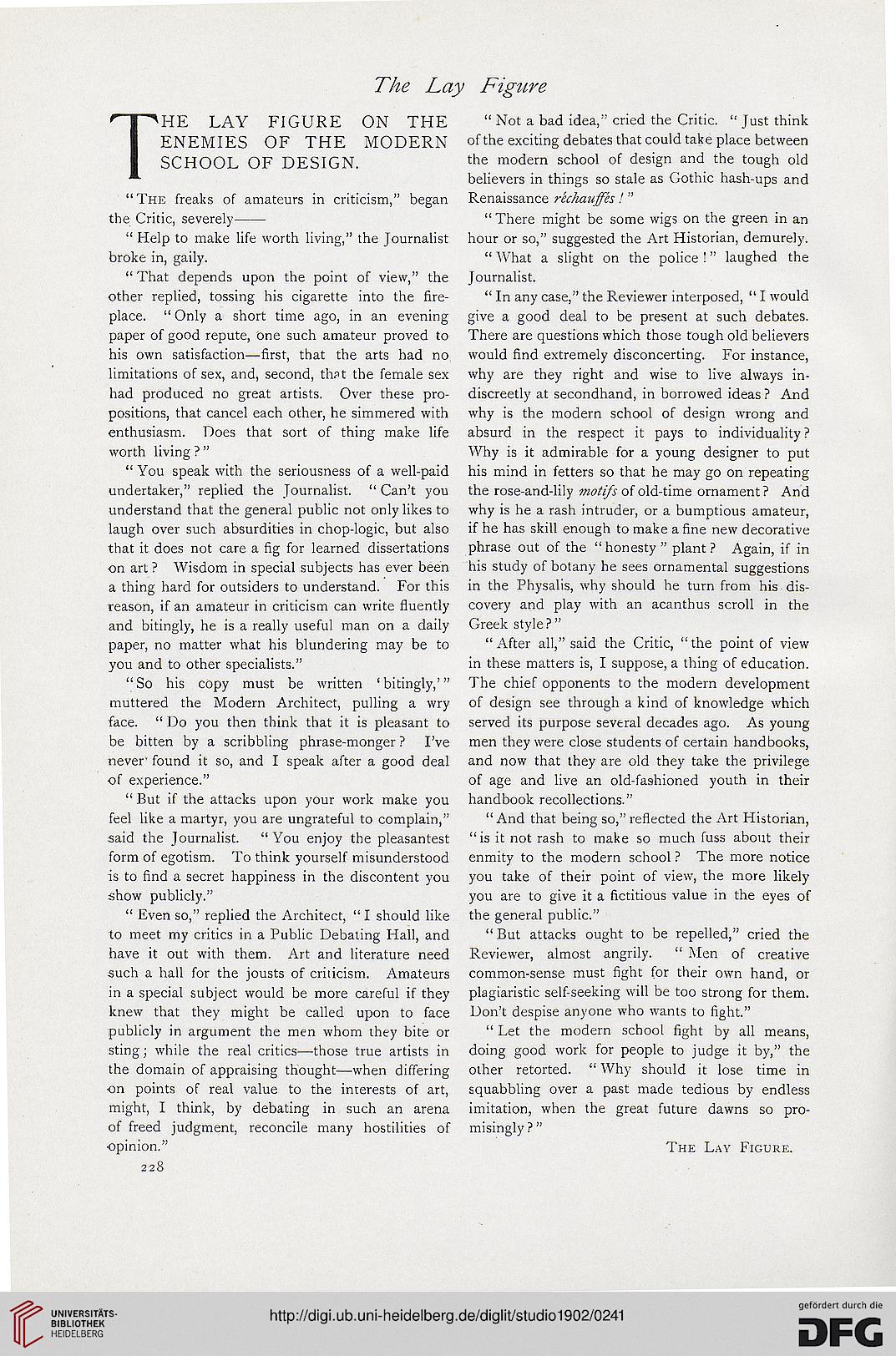 HE LAY FIGURE ON THE
ENEMIES OF THE MODERN
SCHOOL OF DESIGN.

"The freaks of amateurs in criticism," began
the Critic, severely-

" Help to make life worth living," the Journalist
broke in, gaily.

" That depends upon the point of view," the
other replied, tossing his cigarette into the fire-
place. " Only a short time ago, in an evening
paper of good repute, one such amateur proved to
his own satisfaction—first, that the arts had no
limitations of sex, and, second, thct the female sex
had produced no great artists. Over these pro-
positions, that cancel each other, he simmered with
enthusiasm. Does that sort of thing make life
worth living ? "

" You speak with the seriousness of a well-paid
undertaker," replied the Journalist. " Can't you
understand that the general public not only likes to
laugh over such absurdities in chop-logic, but also
that it does not care a fig for learned dissertations
on art ? Wisdom in special subjects has ever been
a thing hard for outsiders to understand. For this
reason, if an amateur in criticism can write fluently
and bitingly, he is a really useful man on a daily
paper, no matter what his blundering may be to
you and to other specialists."

" So his copy must be written ' bitingly,'"
muttered the Modern Architect, pulling a wry
face. " Do you then think that it is pleasant to
be bitten by a scribbling phrase-monger ? I've
never' found it so, and I speak after a good deal
of experience."

" But if the attacks upon your work make you
feel like a martyr, you are ungrateful to complain,"
said the Journalist. "You enjoy the pleasantest
form of egotism. To think yourself misunderstood
is to find a secret happiness in the discontent you
show publicly."

" Even so," replied the Architect, "I should like
to meet my critics in a Public Debating Hall, and
have it out with them. Art and literature need
such a hall for the jousts of criticism. Amateurs
in a special subject would be more careful if they
knew that they might be called upon to face
publicly in argument the men whom they bite or
sting; while the real critics—those true artists in
the domain of appraising thought—when differing
on points of real value to the interests of art,
might, I think, by debating in such an arena
of freed judgment, reconcile many hostilities of
opinion."
228

" Not a bad idea," cried the Critic. " Just think
of the exciting debates that could take place between
the modern school of design and the tough old
believers in things so stale as Gothic hash-ups and
Renaissance rechauffes!"

" There might be some wigs on the green in an
hour or so," suggested the Art Historian, demurely.

" What a slight on the police ! " laughed the
Journalist.

" In any case," the Reviewer interposed, " I would
give a good deal to be present at such debates.
There are questions which those tough old believers
would find extremely disconcerting. For instance,
why are they right and wise to live always in-
discreetly at secondhand, in borrowed ideas ? And
why is the modern school of design wrong and
absurd in the respect it pays to individuality ?
Why is it admirable for a young designer to put
his mind in fetters so that he may go on repeating
the rose-and-lily motifs of old-time ornament ? And
why is he a rash intruder, or a bumptious amateur,
if he has skill enough to make a fine new decorative
phrase out of the " honesty " plant ? Again, if in
his study of botany he sees ornamental suggestions
in the Physalis, why should he turn from his dis-
covery and play with an acanthus scroll in the
Greek style?"

" After all," said the Critic, " the point of view
in these matters is, I suppose, a thing of education.
The chief opponents to the modern development
of design see through a kind of knowledge which
served its purpose several decades ago. As young
men they were close students of certain handbooks,
and now that they are old they take the privilege
of age and live an old-fashioned youth in their
handbook recollections."

"And that being so," reflected the Art Historian,
"is it not rash to make so much fuss about their
enmity to the modern school ? The more notice
you take of their point of view, the more likely
you are to give it a fictitious value in the eyes of
the general public."

"But attacks ought to be repelled," cried the
Reviewer, almost angrily. " Men of creative
common-sense must fight for their own hand, or
plagiaristic self-seeking will be too strong for them.
Don't despise anyone who wants to fight."

" Let the modern school fight by all means,
doing good work for people to judge it by," the
other retorted. " Why should it lose time in
squabbling over a past made tedious by endless
imitation, when the great future dawns so pro-
misingly ? "