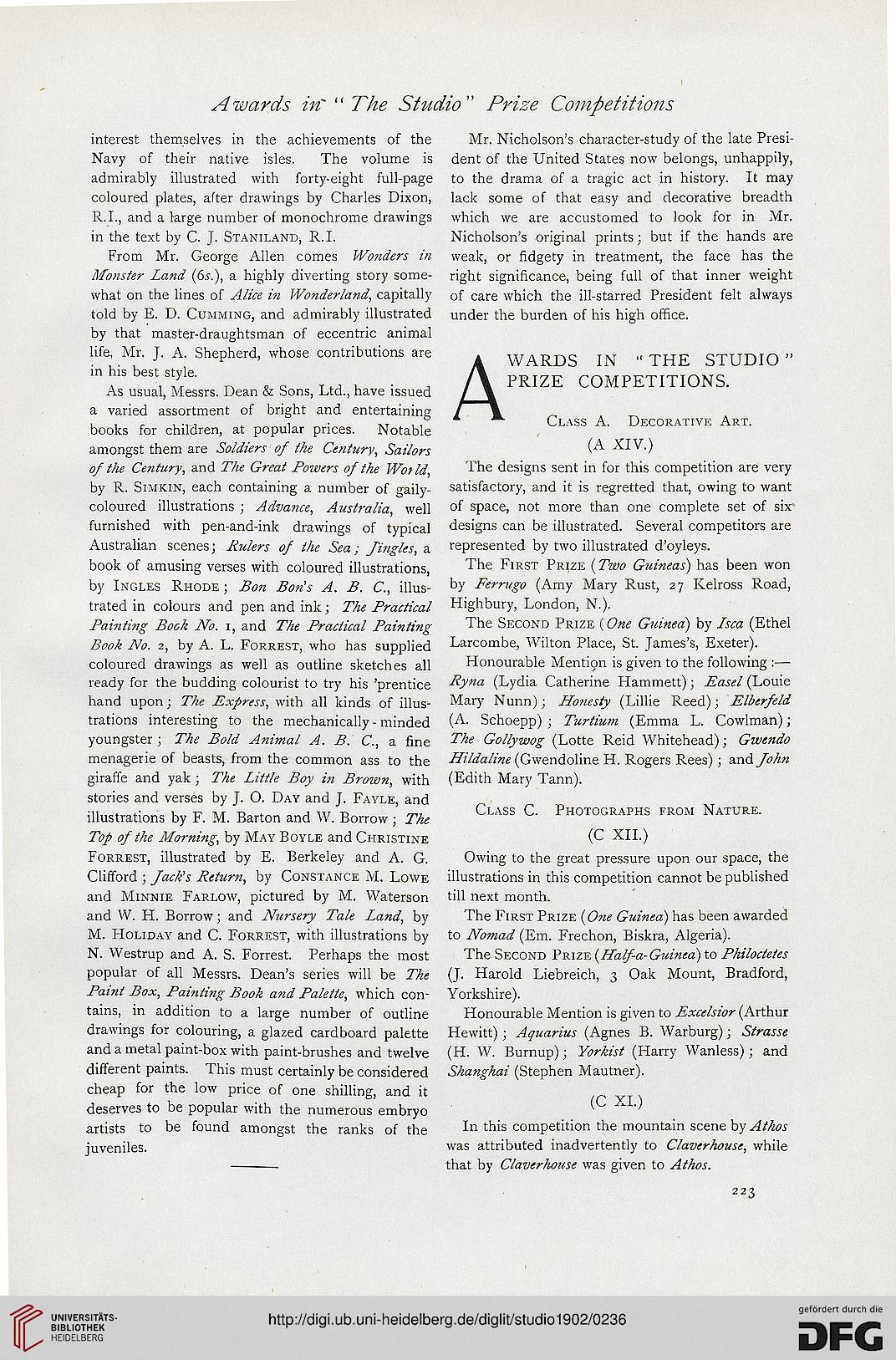 interest themselves in the achievements of the Mr. Nicholson's character-study of the late Presi-

Navy of their native isles. The volume is dent of the United States now belongs, unhappily,

admirably illustrated with forty-eight full-page to the drama of a tragic act in history. It may

coloured plates, after drawings by Charles Dixon, lack some of that easy and decorative breadth

R.I., and a large number of monochrome drawings which we are accustomed to look for in Mr.

in the text by C. J. Staniland, R.I. Nicholson's original prints; but if the hands are

From Mr. George Allen comes Wonders in weak, or fidgety in treatment, the face has the

Monster Land (6s.), a highly diverting story some- right significance, being full of that inner weight

what on the lines of Alice in Wonderland, capitally of care which the ill-starred President felt always

life, Mr. J. A. Shepherd, whose contributions are . WARDS IN " THE STUDIO

in his best style. A pRIZE C0MPETITI0NS.

a varied assortment of bright and entertaining / \_
books for children, at popular prices. Notable

amongst them are Soldiers of the Century, Sailors (^ ^IV.)

of the Century, and The Great Powers of the Wot Id, The designs sent in for this competition are very

by R. Simkin, each containing a number of gaily- satisfactory, and it is regretted that, owing to want

furnished with pen-and-ink drawings of typical designs can be illustrated. Several competitors are

Australian scenes; Rulers of the Sea ; Jingles, a represented by two illustrated d'oyleys.

book of amusing verses with coloured illustrations, The First Prize (Two Guineas) has been won

trated in colours and pen and ink; The Practical Highbury, London, N.).

Painting Bock No. 1, and The Practical Painting The Second Prize (One Guinea) by Isca (Ethel

coloured drawings as well as outline sketches all Honourable Mention is given to the following :—

hand upon; The Express, with all kinds of illus- Mary Nunn); Honesty (Lillie Reed); Elberfeld

youngster ; The Bold Animal A. B. C, a fine The Gollywog (Lotte Reid Whitehead); Gwendo

menagerie of beasts, from the common ass to the Hildaline (Gwendoline H. Rogers Rees); and John

giraffe and yak ; The Little Boy in Brown, with (Edith Mary Tann).

stories and verses by J. O. Day and J. Fayle, and
illustrations by F. M. Barton and W. Borrow ; The

Top of the Morning, by May Boyle and Christine (C XII.)

Forrest, illustrated by E. Berkeley and A. G. Owing to the great pressure upon our space, the

and Minnie Farlow, pictured by M. Waterson till next month.

and W. H. Borrow ; and Nursery Tale Land, by The First Prize (One Guinea) has been awarded

N. Westrup and A. S. Forrest. Perhaps the most The Second Prize (Haifa- Guinea) to Philoctetes

popular of all Messrs. Dean's series will be The (J. Harold Liebreich, 3 Oak Mount, Bradford,

tains, in addition to a large number of outline Honourable Mention is given to Excelsior (Arthur

and a metal paint-box with paint-brushes and twelve (H. W. Burnup); Yorkist (Harry Wanless); and

different paints. This must certainly be considered Shanghai (Stephen Mautner).
cheap for the low price of one shilling, and it

deserves to be popular with the numerous embryo ' * ''

artists to be found amongst the ranks of the In this competition the mountain scene by Athos
juveniles. was attributed inadvertently to Claverhouse, while
- i:hat by Claverhouse was given to Athos.